McCain's double standard on deference to the military 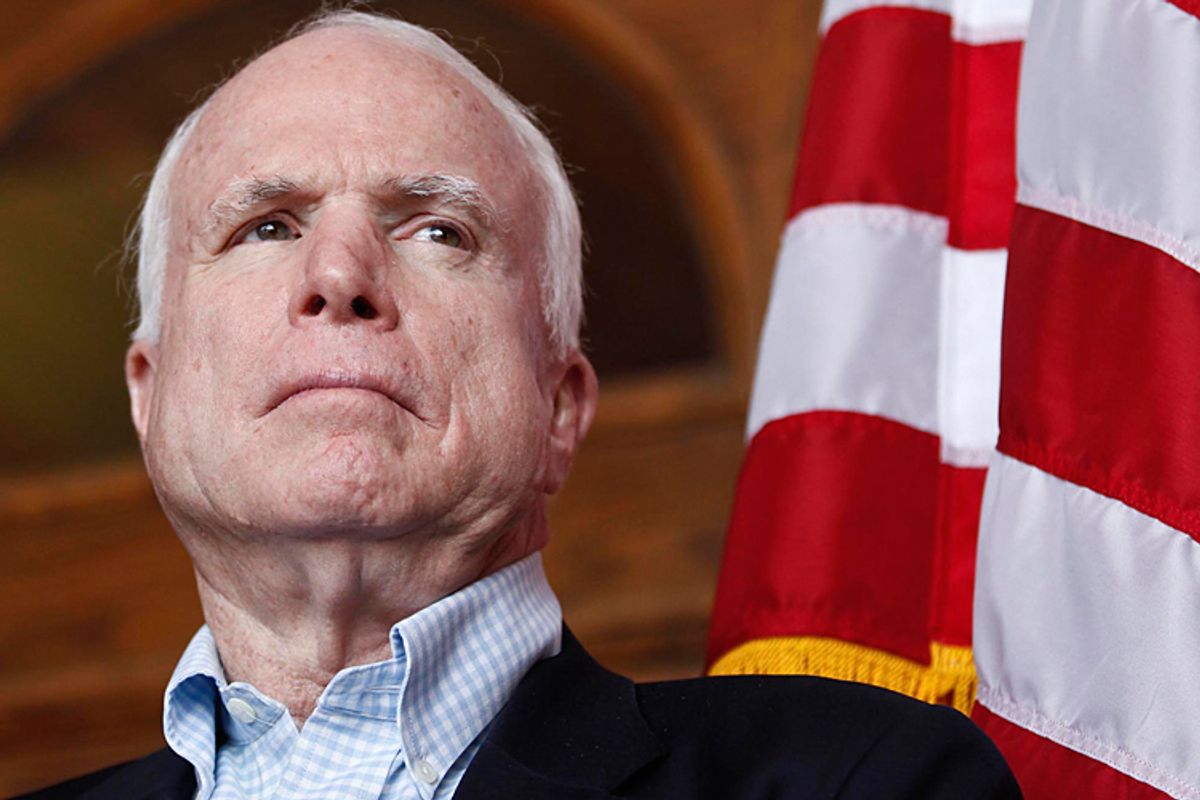 Back in late 2011, as Washington debated how quickly to end the Iraq War, John McCain slammed the White House for pulling out troops faster than some military leaders advised, saying he was "deeply troubled" by Obama's withdrawal plan. "We urge the administration to work urgently with Iraqi authorities to reach an agreement that reflects the best military advice of U.S. commanders on the ground,” he and two other hawkish senators said.

That's been McCain's line for years on big strategic questions about the wars in Iraq and Afghanistan: defer to the military's advice and don't swerve. The military happened to agree with him then on the need to keep troops in those countries, but when it comes to Syria, where the Pentagon is at odds with McCain's gung-ho interventionism, McCain is suddenly uninterested in heeding the military's advice.

"I understand that Americans are war-weary," McCain said in a September 2011 Senate hearing on the war. "But I would urge the president to listen to the advice of our military commanders, and to maintain the necessary presence of U.S. forces in Iraq."

He made the same argument in 2009 about Afghanistan, warning that committing any fewer troops than the chairman of the Join Chiefs of Staff recommended would be "an error of historic proportions."

And given McCain's stature in his party, the McCain rule of deference to the Pentagon on foreign policy has became the de facto position of the rest of the GOP, and especially its hawkish wing. But is this really a consistent rule, or just a convenient rhetorical sleight of hand to justify McCain's hawkish policy?

Fast forward to today's conflict, Syria, and the McCain rule has been flipped on its head. While Pentagon officials have urged caution, saying they're not sure the rebels can be trusted enough to be given arms, and warn that penetrating Syria's air defenses would be difficult, McCain favors swift action.

And when Renée Montagne asked McCain about Syria on NPR's "Morning Edition" last week, the senator dismissed the Pentagon's concerns out of hand as petty excuse-making:

You know, one thing I've found, as much as I love and respect the military, the military can always find a reason not to do something if they don't want to do it.

He made a similar quip on Fox News Sunday, casting aside Joint Chiefs Chairman Martin Dempsey's warnings about airstrikes:

One thing I've learned about some of our military -- some of our military leaders, they don't want to do something, they can invent lots of ways not to do it. The fact is we are capable of taking out their air on the ground ... And to -- and to allege somehow that the United States of America can't do that, means we've wasted a hell of a lot of taxpayer dollars.

So when it comes to Iraq or Afghanistan, McCain doesn't want anybody second-guessing the military, whose advice must be taken as gospel. But in Syria, he seems to think he knows better than the Pentagon. And that's fine, the military is and should be subservient to civilian leaders like Obama and McCain, but his casual dismissal of the Pentagon's concerns in Syria should give anyone pause the next time McCain invokes the generals' advice when it comes to Afghanistan. Indeed, critics noted he even sometimes ignored the advice of commanders who disagreed with his more muscular approach in Iraq.