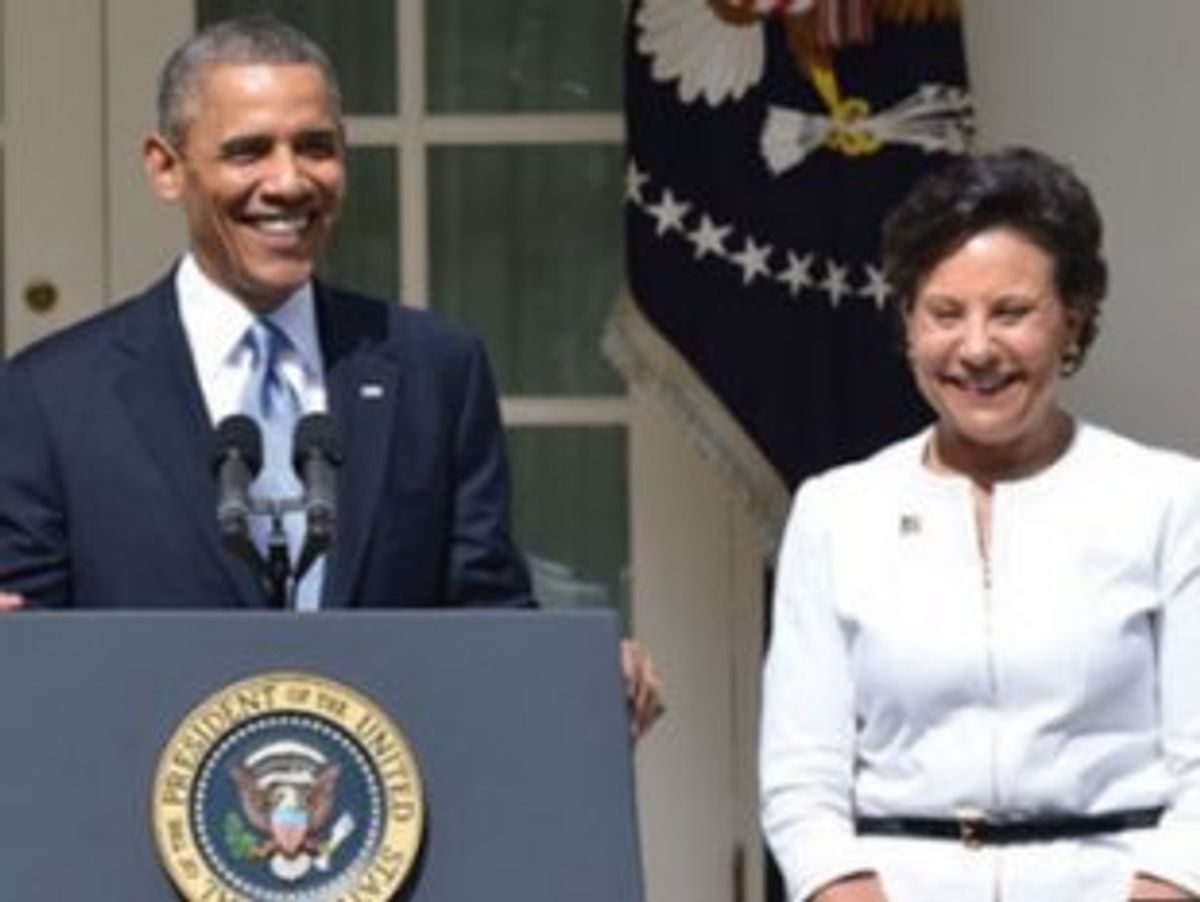 President Obama has let the public down once again with his pick for Secretary of Commerce Penny Pritzker, the billionaire businesswoman who led the national 2008 fundraising effort that kept the Obama campaign’s hopes alive and catapulted him to the White House.

Loyalty and trust are prized political values—and clearly Obama trusts Pritzker, whom he has known for two decades. But Obama’s fealty is going to be tested because her record as a businesswoman shares similarities with Mitt Romney’s. Her massive wealth is kept in tax-avoiding offshore accounts. Her family’s best-known business, the Hyatt hotel empire, is known for bitter and ongoing disputes with labor unions. Her resume includes running a bank that pioneered high-interest subprime loans and then failed miserably, leaving uninsured depositors with losses averaging $6,000.

Since 2008, when Pritzker was said to have wanted the Commerce post, she apparently has disentangled her assets from her family’s portfolio. But there is no escaping that her nomination highlights the biggest schism in the Democratic Party: it cannot be a party that embraces both workers and the wealthy without large doses of hypocrisy.

“There is a huge unresolved set of issues in the Democratic Party between people of wealth and people who work,” Andy Stern, the Service Employees International Union ex-president, told theNew York Times last July. “Penny is a living example of that issue.”

Not Just An Heiress

Pritzker is the second female CEO Obama has nominated to a cabinet post this term. He picked Sally Jewell, CEO of Recreational Equiment, Inc., for Interior Secretary. But Pritzker’s record in business, politics and philanthropy is much deeper. Her career is that of a person who wanted to be known for more than a family fortune. Yet there is no escaping which side of the economic tracks she hails from.

Pritzker, who turned 54 on the day Obama nominated her, is one of three children of Donald Pritzker, who co-founded Hyatt hotels. She went to private schools in Chicago, earned an economics degree from Harvard University, and then a JD/MBA at Stanford. In the late 1980s, an uncle bought 50 percent of the Illinois-based Superior Bank from the FDIC for $42.5 million and was given $645 million in federal tax credits.

Pritzker was Superior’s chairwoman from 1991-1994, when it pioneered the same kind of high-interest subprime loans that caused the real estate market to crash several years ago. Consumer advocates called Superior’s loans predatory because they were sold to people who could not afford them. But the bank also sold its debt as securities and hid its true financial health from regulators—much like Enron, the Texas energy company that branched out into deriviatives and collapsed at that time.

After the uncle who bought the bank died in 1999, the family asked her to take over the bank. She did and tried to restructure its debt, but the FDIC seized the bank in July 2001. The agency then worked out a settlement with the Pritzker family, where they agreed to pay $460 million over 15 years. That settlement still left account holders a total of $10 million short—an average of $6,000 for uninsured depositors. Federal courts ruled the family could not be sued to recover any more funds.

“This is a story of two Americas with two sets of laws, one for the rich and powerful and another for the rest of us,” Clint Krislov, the depositors’ attorney, told Consortium News in 2008. “My clients will all be dead, before they get back their money, given the [U.S.] Supreme Court’s recent decision to uphold the lower court, which put the predatory owners on the front of the line, if any money is recovered.”

The Pritzkers and the Unions

Subsequent fights within the Pritzker family led to a breakup of its holdings, starting in 2005 and unfolding over the next half-dozen years. But she has been on the Hyatt boardsince 1999, in addition to other businesses she co-founded, which include real estate development, airport parking lots and a credit reporting service, Hyatt’s website said.

The Hyatt chain “has long battled Unite Here in Los Angeles, Chicago and elsewhere," the Chicago Tribune reported in its nomination coverage. “And Pritzker, who served on the Chicago Board of Education until she resigned in March, has been harshly criticized by the Chicago Teachers Union. When she stepped down, a union official said she ‘has a long and storied history as an anti-labor and anti-worker kind of boss.’”

The Tribune said Hyatt “remains in a four-year labor dispute with its primary union in Chicago, Unite Here Local One, over contract provisions.” That fight has become nasty and personal, the paper said, with labor organizers confronting Pritzker and other board members at their offices and charity events. The AFL-CIO, the country’s largest largest labor federation, joined in the call for a global boycott of Hyatt properties last July. The NFL Players Association and the National Organization of Women have also joined.

You might think these fights would prompt the conflict-averse Obama White House to steer clear of a political minefield. But the opposite appears to be true.

Since her cabinet nomination, the Tribune said that Chicago “Local One’s President Henry Tamarin has been silent on the pick and declined interview requests... He did so again Thursday through a Unite Here national spokesman. His son, Nate Tamarin, works at the White House and is a liaison to labor.”

Notably, last summer the Times said, “Henry Tamarin… helped create a devastating campaign against Ms. Pritzker, even though she was just one member of the family and organization. He hired an impersonator who walked the picket line handing out plastic coins and shouting ‘Get back to work! Penny needs her billions!’”

That Times report also said, “as she served on White House councils alongside Richard L. Trumka, the A.F.L.-C.I.O. president, his organization released a video that cast her as a villainess.”

The Chicago Teachers Union also has unkind words. Pritzker resigned from the Chicago Board of Education in March, the Tribune reported, “days before Mayor Rahm Emanuel announced he had targeted 53 elementary schools and a high school program to close, affecting an estimated 30,000 students.”

“We know Penny Pritzker,” Kristine Mayle, Chicago Teachers Union financial secretary told the paper. “Her policies adversely affect working families. She has worked to close schools and destabilize neighborhoods, and we hope she does a better job in her new position, if she gets it."

There are also questions surrrounding how Pritzker manages her vast wealth, which theTribune put at $1.85 billion, making her one of the 300 wealthiest Americans.

Apparently, like the Repubican Party’s 2012 presidential nominee, Mitt Romney, she has much of her money in offshore accounts that are not subject to federal taxes. Shortly after her nomination, Iowa Republican Sen. Charles Grassley called for an examination into how the family’s offshore assets have managed to evade taxes even after Congress tried to close those loopholes.

She is “associated with the kind of tax avoidance activity that the president dismisses as fat-cat shenanigns for others,” Grassley said. “It’s hypocritical to overlook tax avoidance when it’s convenient.”

North Dakota Sen. John Thune, the highest-ranking Repubican on the Senate Commerce Committee, also issued a skeptical statement after the nomination, saying, “Americans continue to suffer from weak economic growth and persistent, high unemployment, and I am anxious to hear her thoughts on how the Commerce Department can better work to address those and other issues.”

What This Says About Obama

Pritzker has responded to critics before on these controversies—the bank failure, labor fights and offshore accounts. She is known as one of Chicago’s top philanthropists, whose giving includes building pavillions at major art musuems and parks. But she is best-known for shepherding Obama through various stages of his political career.

Pritzker apparently met the Obamas at a YMCA in the early 1990s when her children were on a basketball team coached by Michelle Obama’s brother, Craig Robinson. They became friends and she helped to introduce Obama to Chicago’s political and business universe, from members of the city’s Jewish community to corporate executives who donated to his 2004 U.S. Senate campaign and 2008 presidential campaign.

In 2008, she was his national finance chairwomen, finding people who would agree to raises hundreds of thousands of dollars from their networks of friends for Obama. She was an indisputable part of the team that broke presidential fundraising records that year, and apparently wanted the Commerce Secretary post but had to step back because the litigation surrounding the unwinding of her family’s assets was not yet completed.

Obama chose Gary Locke as his first Commerce secretary in 2009, but Locke left the job to become the U.S. ambassador to China in 2011. His replacement, energy executive John Bryson, was involved in a hit-and-run accident in June 2012 that was linked to a seizure. He soon resigned, citing health concerns, leaving the post unfilled until now.

The Commerce Department has a $7.5 billion budget, 47,000 employee worldwide in 12 separate agencies, including the Bureau of Economic Analysis, Census Bureau, Patent and Trademark Office, and National Oceanic and Atmospheric Administration, which includes the National Weather Service. But her primary job is likely to repair Obama’s reputation in the corporate circles where she raised big money for his 2008 campaign—and possibly with the American Jewish community as well.

Her relationship with Obama is among the very few that span the personal and political, Bill Daley, a Commerce Secretary under Bill Clinton and a White House chief of staff to Obama, told the Tribune. Obama “watched her kids grow up,” he said. “Her friendship with the President gives her a unique ability as part of the economic team.”

Her nomination by Obama might be the most recent confirmation that as former House Speaker Tip O’Neill famously said, “All politics is local” and you have to “Dance with the one that brung ya.” But it also underscores that the Democrats, including Obama, cannot be a party that embraces both workers and the wealthy.