Here's what you need to know about the constantly evolving situation there, and the best of our no-good options 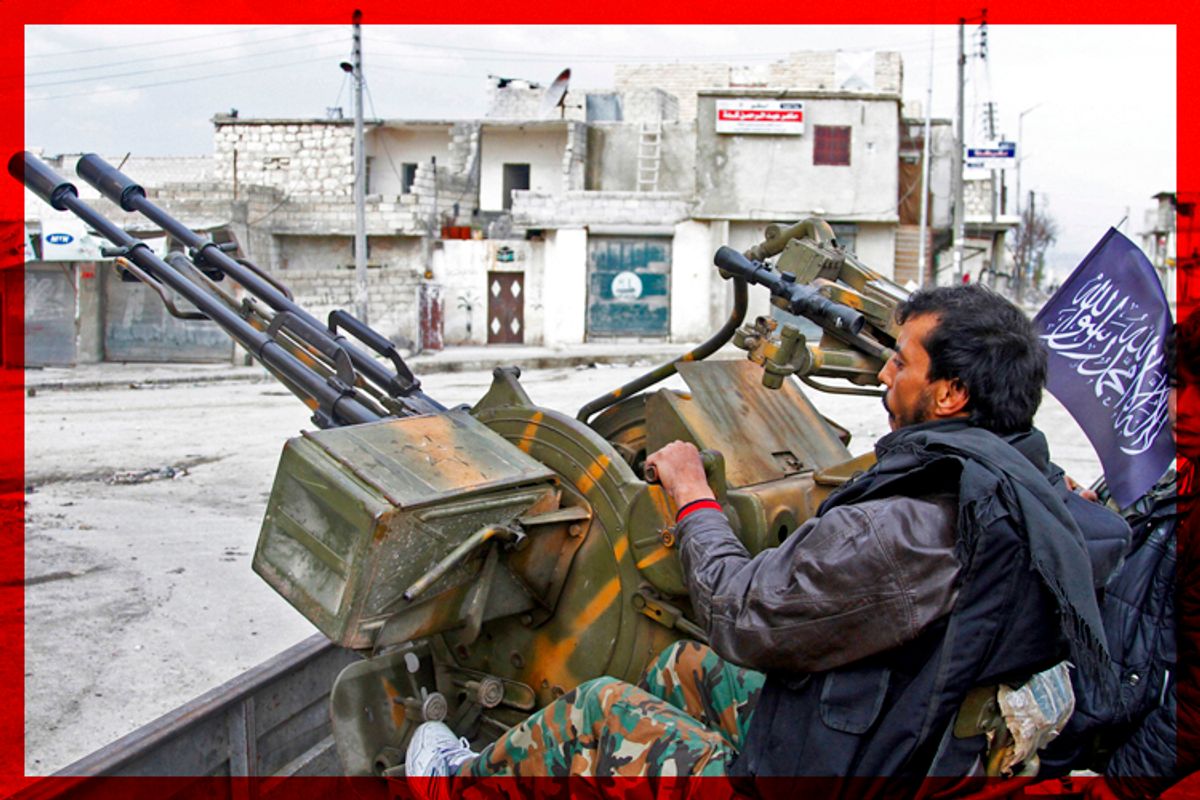 In 1968, caught in the throes of the Vietnam War, a frustrated Lyndon Johnson quipped to Bill Moyers that he felt like a hitchhiker on a highway in a Texas hailstorm. “I can’t run, I can’t hide and I can’t make it stop.”

Syria isn’t Barack Obama’s Vietnam by a long shot. And I seriously doubt that Obama feels the same way Johnson did. But Johnson’s conundrum is in many ways Obama’s, too. In Syria, there are no good options, American credibility is at stake, and the pressures to act are considerable in the face of great uncertainties.

Doing nothing is unacceptable in the face of almost 80,000 dead and millions of Syrians displaced internally and abroad. Limited involvement – even on the military side -- will likely be ineffective, and getting stuck with the check through undertaking a massive military intervention is out of the question.

So what’s a guy to do? Sure, there are risks of acting; but there are consequences of not acting, too.

Indeed, in this regard, Syria is a moral tragedy and humanitarian disaster. It’s hemorrhaging refugees and radicalized jihadists. It’s a threat to regional stability and to Turkey, Jordan and Israel. It’s a potential proliferator of chemical weapons, a way to weaken Iran if only the Americans would recognize the opportunities; and it’s a threat to America’s credibility if Obama doesn’t act boldly in the face of self-declared “red lines.”

But before we succumb to the talking points of the liberal interventionists and neoconservatives who are pushing the president to save Syria, let’s consider for a moment what Syria is not. Perhaps then we might have a bit more perspective to be able to identify a proper course of action.

Syria was never Obama’s to win or lose

The “who lost Syria?” debate is ramping up again. The central charge: that by not acting earlier the administration has essentially helped to create the misery that has befallen the country – refugees, radicalized jihadists and sectarian barbarity. Or worse still, that the president is responsible for it.

We need to get a grip here. One of the most compelling features of the Arab Spring is that it was sui generis – an authoritative and legitimate movement by the Arabs themselves to own their own politics and fix their own house -- for better or worse. The idea that America might have fundamentally altered that course is both arrogant and illusory.

Consider Egypt, a former ally with whom we have had a 40-year relationship – the closest, perhaps, with any Arab state. We provide the Egyptian military with $1.4 billion in assistance and what we say or don’t can influence billions more of IMF funds. Do you think we’ve been able to substantially influence the policies of the Morsi government? And even in Iraq with hundreds of thousands of boots on the ground and billions more in economic and technical assistance, we failed to produce the outcome we sought. Is Iraq better off without Saddam Hussein? Sure. But is it worth the price America paid (Afghanistan, too, for that matter): 6,400 dead, thousands more crippled for life, a trillion dollars expended and still counting -- and diminished credibility? When America acts it needs to ask not only why are we acting and can we accomplish our goals. But what will it cost.

Let’s be clear: Nobody is suggesting thousands of American boots on the ground in Syria. May 2013 isn’t March 2003; Obama isn’t Bush 43. The risks of getting drawn into Syria in the same way we approached Iraq is a false analogy. But, what is worth paying attention to is the relationship between means and ends, particularly the relationship between U.S. military power and the end state we want to influence and achieve.

Military power is an instrument no more. It’s often used to achieve political ends. And this relationship in the case of Syria, as in the case of Afghanistan and Iraq, is by no means clear. The latter two wars are cautionary tales. We won the battlefield in both places, yet winning the politics and the future of these polities don’t look much like victories – given the costs.

The greatest constraint on a more muscular policy on Syria is the lack of clarity not only on the end state but the relationship between a U.S. military role and that endgame.

None of the military options offered up so far – arming the rebels, a no-fly zone or direct air missile strikes against Syrian military assets and leadership targets -- offer up clarity and confidence on this matter. Supporting the rebels to tip the balance of power against the regime seems logical enough, but are we prepared to give them the kind and quantity of arms they might need, including anti-air and anti-armor weapons? Are we prepared to compete with the Russians and Iranians on the ground in a long-term proxy war when our clients may not share our endgame goals and are one of dozens of competing groups whose loyalties or behavior is beyond our control? And if the initial tranche of weapons doesn’t lead to clear results, are we prepared to do more, see this through, even if it requires direct military intervention over a sustained period of time? Based on what I’ve seen from this administration, the answer is no.

Great powers have the option and leeway to behave in contradictory and hypocritical fashion. It’s actually in their job description. We can intervene in Libya and not in Syria; we support an Arab Spring in Egypt but not in Saudi Arabia without blinking an eye.

Libya was low-hanging fruit; it had no allies, air defenses or WMD. And America could act with the support of a Security Council resolution and with NATO as the implementing arm.

Syria is fundamentally different. It’s far more important than Libya, to be sure. But it’s also far more difficult to manage. And there’s no compelling case that has yet been made – neither moral nor strategic -- that trumps the risks and uncertainties for military intervention, certainly not for the U.S. playing the lead role in doing so.

I’ve heard all the arguments, chiefly that a major U.S. military role in Syria will help weaken the Iranians; that if we don’t intervene our credibility will be shattered; and that North Korea and Iran will draw the appropriate conclusions.

They’re all compelling. But so is this: Governing is about choosing. It’s about deciding what really is in the vital national interests of the United States at home and abroad. We’re now coming off the two longest wars in U.S. history where the standard for victory isn’t whether we could win, but when could we leave. And extrication isn’t the metric you want for measuring the performance of the world’s most consequential power.

And here at home our house is badly in need of repair. Our problems are many. I call them the six deadly D's – dysfunctional politics, debt, deficit, dependence on hydrocarbons, a deteriorating infrastructure and educational system. They are slow bleeds and they’re sapping the source of our national power. We do not have the luxury of getting bogged down in conflicts where we have no clear sense of the endgame; what an American role really means or the costs on an open-ended commitment.

In all these many months I've yet to hear or read anything that even remotely resembles a military strategy for Syria that offers the promise and prospect of actually working. I haven’t heard much from the administration about an operational plan for a stabilization force and the gazillions that will be required to rebuild the country. Loose talk of arms for the rebels, no-fly zones and air/cruise missile strikes is no substitute. Nor is the notion that trying and failing in Syria is better than not trying at all. That’s a great slogan for a college football team, not for the world’s greatest power.

Syria is a tragedy of great proportion. Too much blood has flowed to imagine a negotiated settlement -- and not enough apparently to force the Russians and Chinese to stop supporting Assad, and to bring to bear a unified response that might force the regime to collapse or negotiate a transition from power.

Still, pressure is growing on the U.S. to act. Secretary of State John Kerry may try to convince Putin to press Assad -- and maybe (don’t hold your breath) the U.S. and Russia will find a way to engage on some transition plan. If not, Obama will be forced to do more, most likely to provide limited military assistance to the opposition. Should Assad use chemical agents, the president might authorize direct military strikes against Syrian air assets. None of this, however, will substantially alter the arc of this conflict.

How it will end, other than badly, is not clear. But Obama is right to be risk-averse, not risk-ready, on Syria, and very disciplined about avoiding a slippery slope toward military action. I still believe in my former boss Colin Powell’s notion that if you break it you own it. In this case, Syria is already broken. But at the end of the day, I believe Barack Obama is smart enough not to be stuck with the check.

Aaron David Miller is currently a Distinguished Scholar at the Woodrow Wilson International Center for Scholars. For two decades, he served at the Department of State as an advisor to Republican and Democratic Secretaries of State, where he helped formulate U.S. policy on the Middle East.