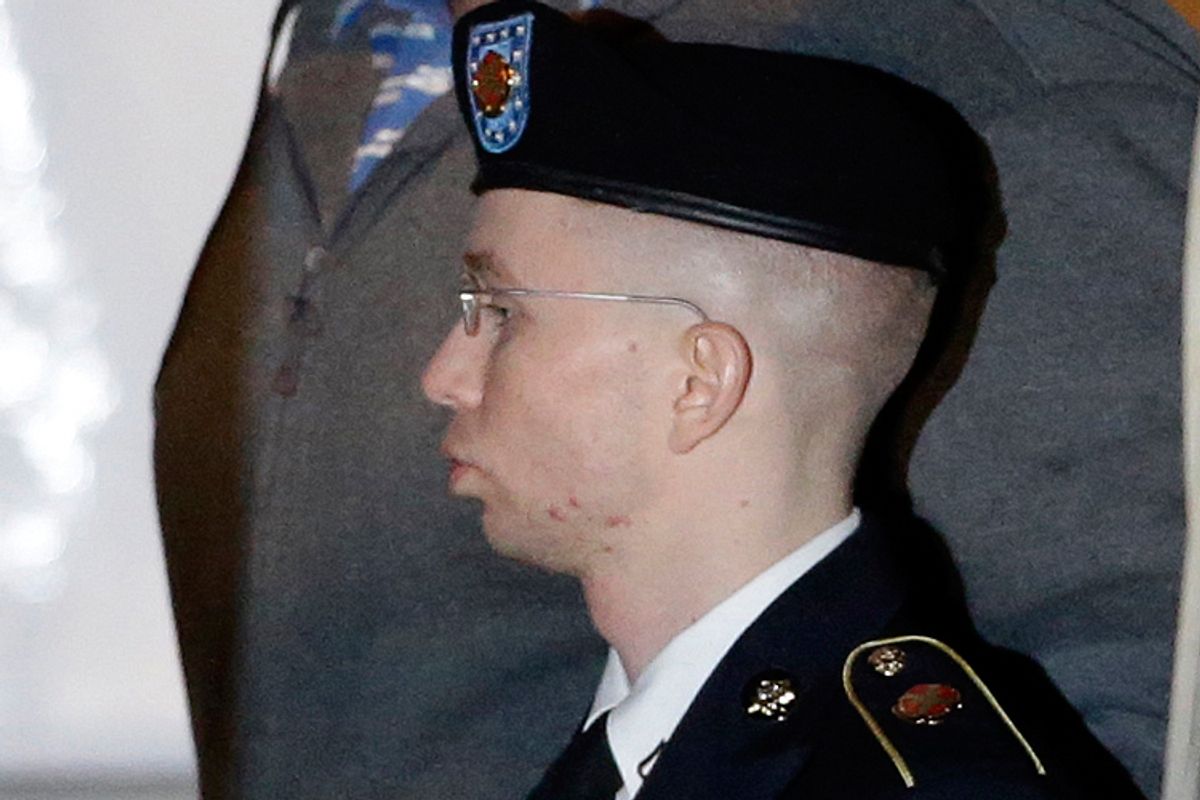 This week, another pretrial hearing is taking place at Fort Meade in the court-martial of Pfc. Bradley Manning, the soldier the United States military is prosecuting for disclosing information to WikiLeaks. It begins today and will take place over a period of at least two days. Except, for this hearing, the public will only be able to witness the first hour or so of proceedings and then the rest of the pretrial hearing will be a closed session without the press or public present.

It is the second closed session in recent months. A portion of the proceedings were closed on March 1 to deliberate over whether the defense should be allowed access to a Defense Department “operator” — ”John Doe” — who was part of the raid that killed Osama bin Laden and allegedly uncovered digital media with copies of documents Manning disclosed to WikiLeaks.

David Dishneau, who has been regularly covering the proceedings for the Associated Press, writes, “government secrecy” is reaching a “new level,” as “military judge, Col. Denise Lind, has ordered what prosecutors say is an unprecedented closed hearing Wednesday at Fort Meade to help her decide how much of Manning’s upcoming trial should be closed to protect national security.”

As the judge granted in a ruling on April 10, the closed session is a product of a motion by Manning’s defense “to assist the court in determining if there are reasonable alternatives to closure.”

According to Dishneau’s summary “an unidentified prosecution witness will testify” in this secret session as part of a “dry run.” This will give the court the ability to test a number of alternatives that could be used to keep proceedings open during the trial, such as: stipulations to facts ahead of testimony, using code words, utilizing computer screens with code names, the “silent witness rule” (employing substitutions when referring to sensitive information), a syllabus or legend, declassification, redactions, etc.

The government, on Feb. 27, said it intended to call 141 witnesses during the trial and sentencing. Prosecutors indicated 73 of the witnesses would give testimony that included “classified evidence.” Four “unique witnesses,” including “John Doe,” would require all testimony be given during a closed session. Thirty-three witnesses, military prosecutor Maj. Ashden Fein maintained, would require the court be closed for part of the testimony or else it would be impossible to understand testimony being given.

“The government considers 30% very little?” the judge asked, appearing to be a bit dumbfounded. As has been the government’s chief justification for how it has handled the case for the past two and a half years, Fein argued the “volume of classified information” made it reasonable to close that much of the trial.

Though Manning has pleaded guilty to some of the offenses in 10 of the 22 charges he faces, the government still intends to call all 141 witnesses and present its entire case over a span of 12 weeks, beginning on June 3.

He has confessed to being responsible for disclosing the “Collateral Murder” video, the Iraq and Afghanistan war logs, the U.S. State Embassy cables (including a particular cable from Iceland, 10 Reykjavik 13), information allegedly detailing the Iraqi Federal Police’s torture of opponents of Iraqi Prime Minister Nouri al-Maliki, detainee assessment briefs for Guantánamo prisoners and two intelligence documents from a “government agency.”

All of the material remains classified, despite the fact that each disclosure is available to the public. President Barack Obama and his administration have not declassified any of the material. Even information that should not have been classified is still classified. (Note: The “Collateral Murder” video was found to be unclassified.)

The prosecutors do intend to exact maximum control over the information on behalf of government agencies. They have indicated in court that they do not want specific details on damage that occurred to become public during the trial, like evidence on individuals who were killed, diplomats who were put at risk, IED attacks that were made possible, damage that was done to diplomatic relations (like deals that collapsed), etc. In service to government agencies, they will do everything in their power to ensure state secrecy is protected.

Lind stated in court, on April 10, the court was considering “employing the curative measure of making redacted transcripts of closed proceedings publicly available.” This possible remedy could be how the judge convinces herself it is permissible to allow 30 percent of the trial to be closed by prosecutors, but it would not necessarily mean the press and public receive information on proceedings in a timely fashion. Transcripts would be subject to “classification review” as well as “authentication,” which could be as cumbersome as the Freedom of Information Act process, making it hard for journalists to report news.

A secret session could help ensure the process runs smoothly. Dishneau quoted Air Force Reserve Lt. Col. David Frakt, who rationalized, “What they don’t want to do is to have a yo-yo effect – let the public in, send the public out, let the press in, send the press out. We have had that kind of circus atmosphere at Guantanamo, and it just looks very bad.”

Secrecy games have been played by prosecutors. They have claimed an FBI law enforcement file with details on the investigation into Manning was not relevant to the accused. They have blacked out entire pages of evidence turned over to the defense, leading the judge to ask, “How can the defense assert anything if the page is black?” To which Fein responded, “Well, that is what they have to do.” They have misled the judge on the proportion of material in the FBI file that was disclosed and misrepresented when they obtained an impact assessment from the FBI that should have been turned over to the defense. They have argued State Department damage assessment reports were “drafts” so did not have to be provided to the defense. They have played word games by not looking for “investigative files” when asked because what the defense was really looking for were “working papers.” And, prosecutors also accused the defense of “graymail,” using the trial to open up government files and expose state secrets.

A military appeals court has ruled the public and press do not have to be given copies of judge’s decisions or orders the day they are issued. Nor do the public and press have a right to court transcripts. While there is a FOIA “Electronic Reading Room” set up by the U.S. Army for access to records from the pretrial portion of Manning’s court-martial, there are at least 500 different records from proceedings so far. Only 96 records have been posted and no new records have been posted to the “room,” since March 15 (even though the press were given physical copies of two rulings on April 10).

For what it’s worth, the “dry run” is a preview of what the trial will be like. There will be multiple times in the trial where the press and public are not allowed to see evidence that is being brought against Manning. Numerous groups and individuals will call attention to the secrecy and ask experts if this is reasonable or not, but everyone will be powerless in the face of the national security state.

Bradley Manning will — absent the declassification of all material he disclosed to WikiLeaks — be convicted of charges and some of the evidence or government arguments against him will never be publicly known.