Whether the sniffing out bombs or merely boosting morale, dogs have played an invaluable role in Afghanistan 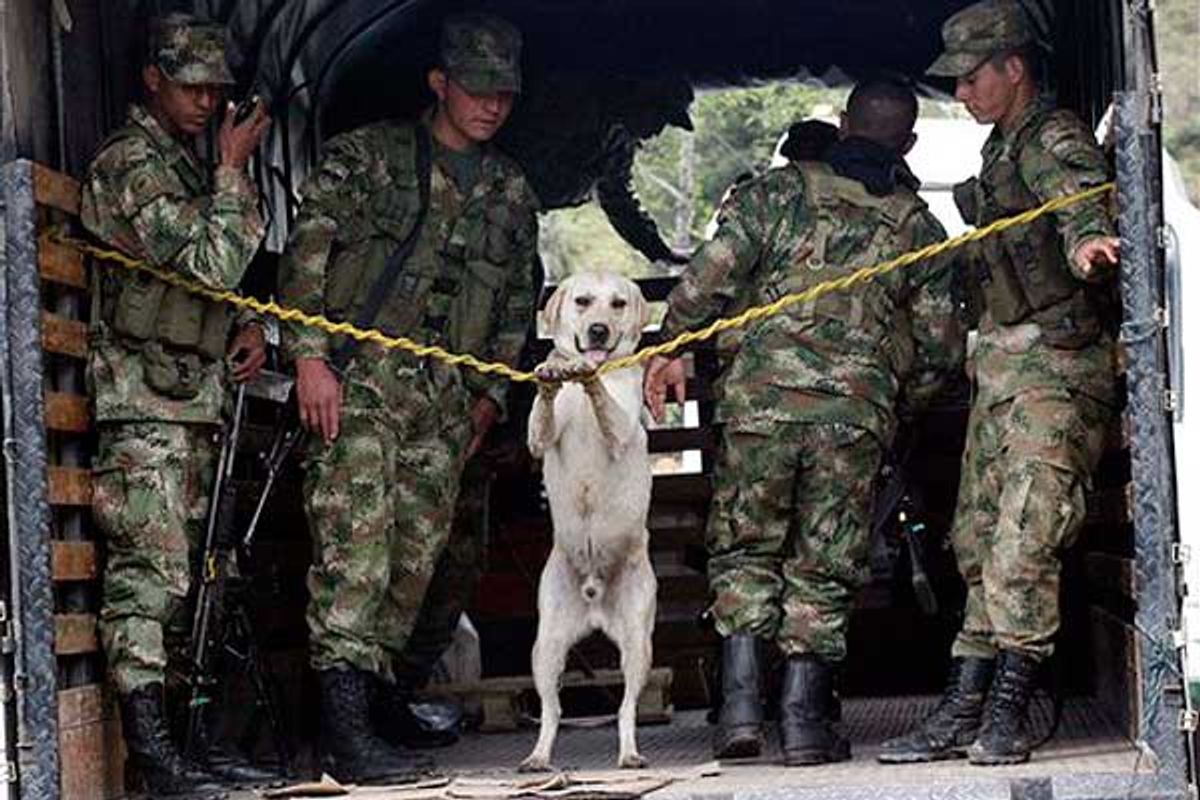 ZHARI, Afghanistan — Aron is 3 years old, with shaggy black fur and long teeth. He loves soldiers' attention and chasing his tennis ball. It is the only life he knows — this is his third nine-month deployment to Afghanistan. Talk of drawdown is lost on him, though he will surely leave Afghanistan forever with his handler next year.

During the height of the Iraq war, no combat operation would be complete without a bomb-sniffing dog leading the way. During downtime on huge bases the dogs and their military handlers were generally sequestered away from other soldiers to minimize the chance of accidents or injuries.

In Afghanistan, a soldier's life is very different. The outposts are austere and remote, and there is no separate area for the working dogs. If there is a working dog at the outpost, it is part of the infantry family there, as much a soldier as any of them.

"Everybody loves Aron here ― with combat slowing down he takes on the role of boosting morale, just hanging out," said Pfc. Levi Lutrell, his handler at Combat Outpost Ahmadkhan (AK). "Dogs don't see it that way, but deploying together has really tightened our bond as far as I'm concerned."

Traditionally, army dog handlers are selected for K-9 training from the military police, but Lutrell is an infantryman who volunteered as part of a new program that has paired more than 300 working dogs with soldiers deploying to Afghanistan. He is responsible for all aspects of Aron's care and well-being, as well as keeping Aron's sniffing skills sharp.

"I'll bury a piece of det cord and walk him by it as if we were checking a road, just to keep his gears turning," Luttrell said. Det, or detonation cord, is a thin, flexible plastic tube filled with high explosive and used for initiating larger charges.

While soldiers work out in the makeshift gym at AK, Aron plays fetch for exercise. Aron's intensity when chasing his tennis ball is riveting to watch. If he was interested, he could probably pluck barn swallows from the sky.

While Aron is a seasoned veteran (he is assigned the rank of staff sergeant), Lutrell is on his first deployment from his home base of Fort Bliss, Texas. Lutrell is originally from Lafayette, Indiana and said he can barely tell the difference between the Texan and Afghan landscapes.

Luttrell says the Afghan soldiers he works with get along with Aron. Many soldiers believe that Afghans shun dogs as being unclean, but Lutrell says that's actually a myth. While dogs are not commonly kept as pets in Afghanistan, they have been used for centuries for guarding homes and livestock here. There has been some talk of training Afghan troops to act as dog handlers, but little action. In a sense, working dogs are less finicky, expensive and breakable than the mine detectors Afghans are currently training to use.

When working dogs are retired from combat service, which can be as long as ten years, their handlers are given first dibs on adoption. If the dog's most recent handler won't adopt, the military contacts the previous handlers to look for a match. Failing that, the dogs are sent to Lackland Air Base in Texas and offered to the public for adoption.

"People might be understandably hesitant to adopt a military attack dog, but Aron is a bomb sniffer and has never been trained to bite," Luttrell said. "I'd love to adopt Aron when we get home, but I think he's a long way from retirement."