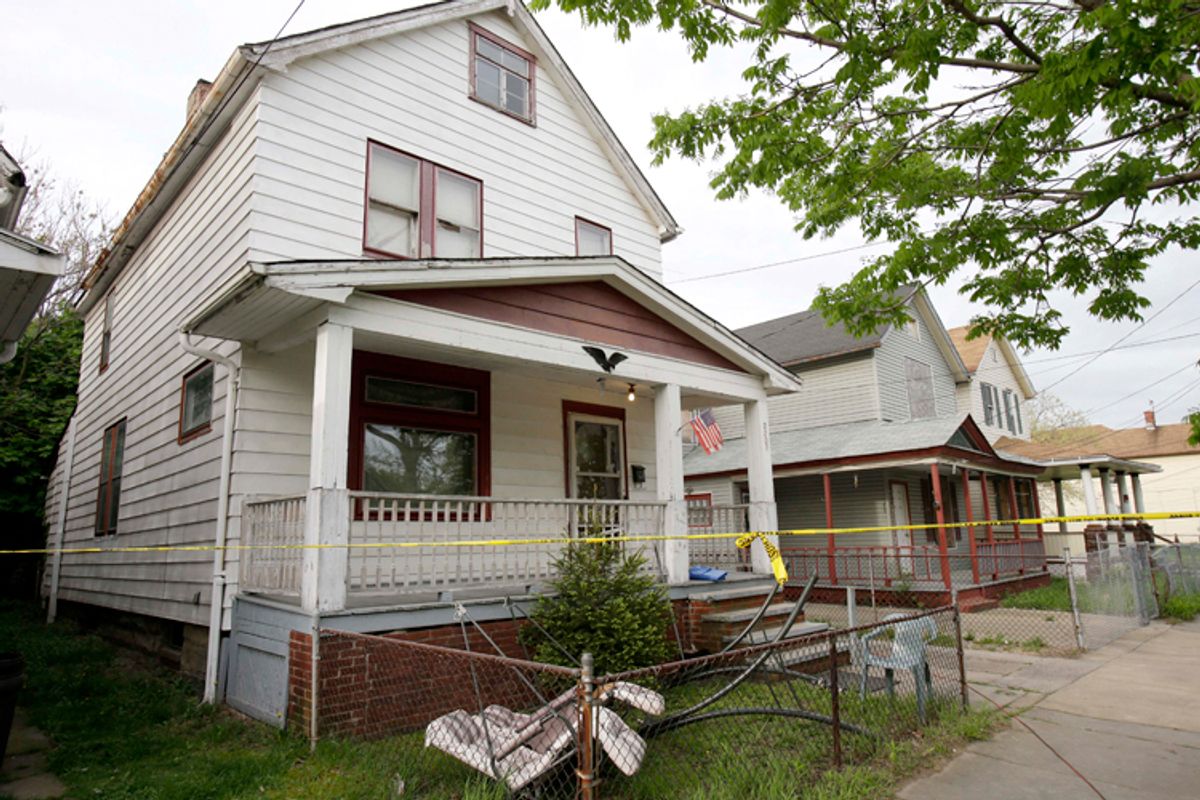 The Cleveland house where Amanda Berry, Gina DeJesus and Michelle Knight were allegedly kept in captivity for nearly a decade. (AP/Tony Dejak)
--

As a native of Cleveland, I’ve been fascinated, on the one hand, by the city’s desperate, dystopian "Mad Max" hellscape of shuttered warehouses, gruesome rendering plants and rusted iron ore unloaders. It's a world that still echoes dimly with the cacophonous clanging of ancient machinery and the inferno roar of steel foundries and blast furnaces. On the other hand, there's the shining modern metropolis that boasts of having one of the world’s great orchestras, a renowned art museum and the Rock and Roll Hall of Fame.  These disparate worlds can be viewed simultaneously from the observation deck of a building with the inauspicious name Terminal Tower.

While many non-residents are aware that the Cuyahoga, that most notorious of all rivers, vivisects the city into two roughly equal parts -- the east and west sides -- they may not know that the city is also divided to a certain degree into north and south by Interstate 90. On the north side you will find historic neighborhoods with splendid Victorian-era houses that have undergone the slow but steady process of gentrification, its newly resurfaced streets teeming with award-winning microbreweries, intimate bistros owned by celebrity chefs, trendy nightclubs and quaint thrift shops.

But on the south side of that enormous concrete trench you will find, near the corner of West 25th and Seymour Avenue, an old, narrow, clapboard shanty with a boarded-up window and faded white paint, where for more than a decade a former school bus driver named Ariel Castro, conspiring with his two brothers, allegedly confined three young women -- Amanda Berry, Gina DeJesus and Michelle Knight.

I’m familiar with the neighborhood.  As a teen I attended a highly regarded Jesuit prep school on the north side of I-90, situated precisely one mile from the house where these unimaginable horrors took place. From the rooftop of Ariel Castro’s home, one can see the gothic tower of the Jesuit prep school where students, for an exorbitant sum, have the rare opportunity to study Latin and ancient Greek, all the better for reading Horace and Homer in the original.

By comparison, in Cleveland’s Ward 14, the district where the Castro brothers are said to have committed their heinous crimes, the average household income, according to the latest census report, is less than $24,000 a year. Of the 5,200 families who call the ward home, more than 1,500 live below the poverty line.  The houses near West 25th and Seymour often sell for under $40,000.  According to county records, Ariel Castro purchased his 1,400 square foot home in 1992 from a relative for $12,000, and for the past two years he has been delinquent on his property taxes. Records also show Castro’s home as having a 760-square-foot basement, a detail that, given the gruesome circumstances, cannot be overlooked.

A friend who lives nearby describes the neighborhood in generally positive terms. “It’s not chic, but most of the houses are tidy with well-kept gardens. There’s only an occasional abandoned house. It’s a poor but close-knit community of Spanish-speaking immigrants.”

On Monday night, as I watched local news organizations report the increasingly bizarre and sinister facts of the story, I thought about the deeply divided nature of this once prosperous city, a carefully delineated world of privilege and poverty, a boundary that is literal as well as metaphorical. These starkly different worlds exist in part because of the way Cleveland’s neighborhoods have been hastily sliced into petty fiefdoms by corrupt politicians and because of the provincial Midwestern mind-set where white middle-class professionals and impoverished minorities rarely interact, at least not socially.

Shortly after the news broke about Amanda Berry’s harrowing escape from Castro’s lair, many Clevelanders began to argue not about the safety of our streets and the effectiveness (or perhaps ineffectiveness) of our law enforcement agencies, but about the comments made by Charles Ramsey, an African-American man living in a rental property across the street who came to Miss Berry’s aid.  In an interview with a local reporter that has since gone viral, Ramsey said, “I knew something was wrong when a pretty little white girl ran into a black man’s arms. Something is wrong here. Dead giveaway.”  Many better-off Clevelanders were aghast at the way racial attitudes in the city were characterized, and took to their laptops and launched a series of verbal assaults and counter-assaults on every social networking site.

On Tuesday afternoon I spoke to a lawyer at the Cuyahoga County Public Defender’s Office. He quickly dismissed the critics who feared Cleveland’s reputation had been forever sullied by, as one blogger actually called -- about a man held up nationally as a hero -- “a caricature of an uneducated African American man where the norm for the media is to put the most ignorant people in front of the camera.”  The public defender, who may represent at least one of the Castro brothers, said his greatest worry was that Cleveland was going to become known nationally -- and perhaps internationally -- as the dark underbelly of American society. “First the Anthony Sowell case, and now this.”  Sowell, as many people will recall, was a loner who abducted, raped and strangled at least four women and then buried them Edgar Allen Poe-style in the crawlspace and basement of his dilapidated house on the east side.

As it turns out, the public defender may have been right. Within hours of Amanda Berry’s rescue from the house of horrors on Seymour Avenue, Rep. Ed Royce, R-Calif., chairman of the House Committee on Foreign Affairs and a crusader against human trafficking, spoke about the headline-grabbing story in northeast Ohio.

"The eyes of our country are riveted by the welcome rescue of three young women abducted and detained for over a decade in a Cleveland home,” said Royce.  “And as we rejoice at their rescue, this hearing today … underscores the sad reality that millions of other girls around this world and indeed right here, in our own communities … are being robbed of their youth."

Royce, who has successfully offered up amendments condemning the kingdom of Cambodia for its human trafficking problems and rampant corruption, is more accustomed to dealing with those nations where law enforcement agencies have been reluctant, or unwilling, to crack down on gross human rights abuses.

Because of recent developments Royce must now point to Cleveland, not Cambodia, as a central example of the nightmare world that so many women and children face on a daily basis. It’s an undeniable fact that in America there are places that have become a new Conradian heart of darkness with unfathomably long rivers of madness and unspeakable cruelty, shunned and forgotten places that must now be explored before things get out of hand, if they haven’t already.

Kevin P. Keating is the author of "The Natural Order of Things" (Vintage Contemporaries). He lives in Cleveland.