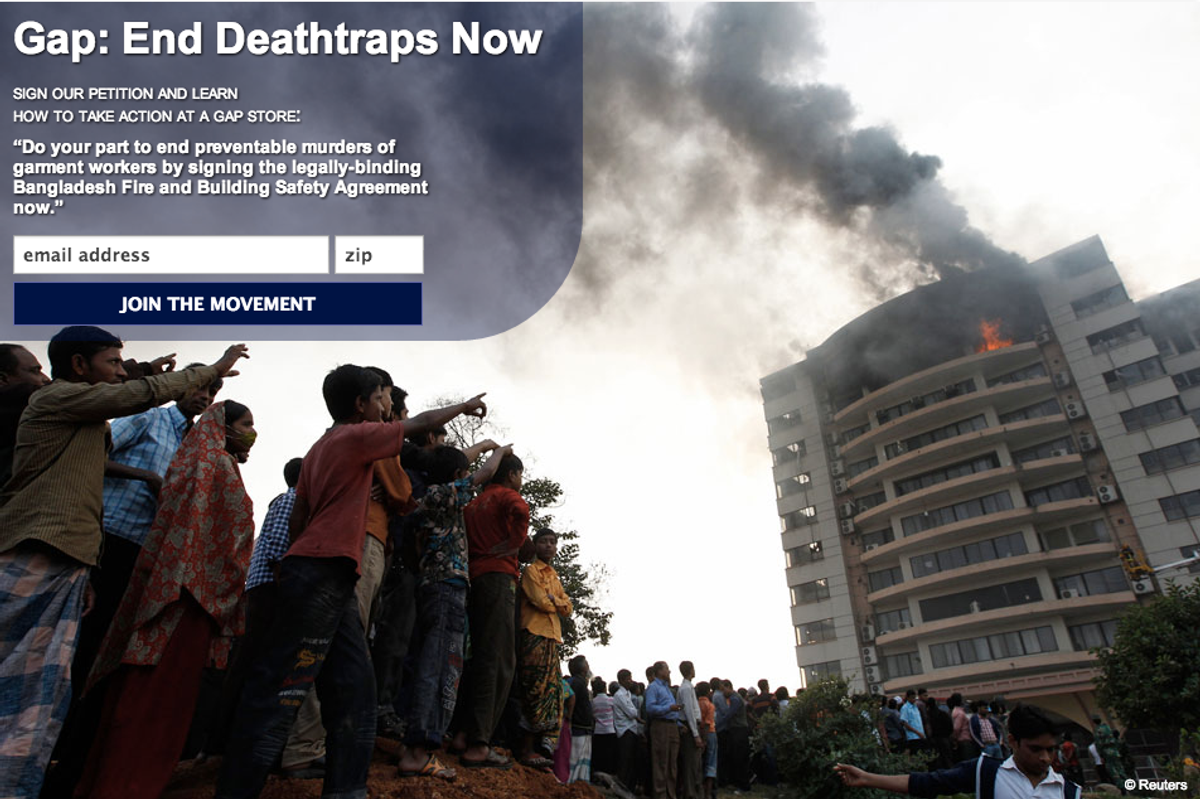 Gap Inc. was not among the retailers found to be subcontracting to Rana Plaza, the collapsed factory in Savar, Bangladesh, that resulted in the deaths of 800 people and the injury of 2,500 others; but the company's larger-than-life retail presence and current lack of transparency around its manufacturing standards have made it a target for a massive, labor-led corporate reform campaign.

The International Labor Rights Forum and United Students Against Sweatshops have launched Gap Deathtraps, a campaign to pressure the clothing giant to abandon its policy of self-regulation and sign the legally binding Bangladesh Fire and Building Safety Agreement to ensure safer factory conditions.

Human rights activists and labor groups have been calling on Gap to fix the factories in the rest of their Bangladesh supply chain since December 2010, but instead Gap is sticking with its own corporate-controlled voluntary initiative that lacks transparency, accountability, and worker voice. Gap initially promised to sign onto the Bangladesh Fire & Building Safety Agreement, but then backed out, announcing their own, go-it-alone initiative. Gap is using the same self-regulatory approach that they and other brands have used for two decades and that has failed to protect the safety of workers in Bangladesh: factory monitoring controlled entirely by Gap, with no transparency, no role for workers or their trade unions, no commitment to pay prices to suppliers that make it feasible for them operate responsibly, and no binding commitments of any kind.

As Salon previously reported, organizers are calling on shoppers to, among other actions, send a letter to the Gap requesting that they pay 10 cents more per garment to ensure factory safety for garment workers. The website includes form letters, recommended direct actions and other ways that shoppers can flex their dollar and consumer choice to support labor rights.

All of us at Gap Inc. are deeply saddened by the tragedies that have occurred in Bangladesh. Our hearts go out to those affected. Gap Inc. takes our commitment to improving working conditions in Bangladesh seriously. We implemented last October a four-point plan that includes up to $22 million in assistance to workers and to improve fire safety at the selected factories that produce our products. In fact, we have independent fire inspectors working in Bangladesh right now who have identified improvements that can be made at the factories with which we work.

But without legally binding agreements or allowances for third-party monitoring, corporate self-regulation will never be enough to ensure worker safety, all but guaranteeing that preventable disasters like the collapse of Rana Plaza will keep happening, labor advocates say.

"Gap prides itself on social corporate responsibility, but has refused for over two years to agree to the Bangladesh Fire and Building Safety Agreement, the only meaningful path to better working conditions by negotiating with unions over working conditions," Karen Li, an organizer for United Students Against Sweatshops, wrote BuzzFeed in an email.

Adding: "Many companies follow Gap's lead, and had Gap taken a leadership position two years ago, these subsequent tragedies could have been prevented."