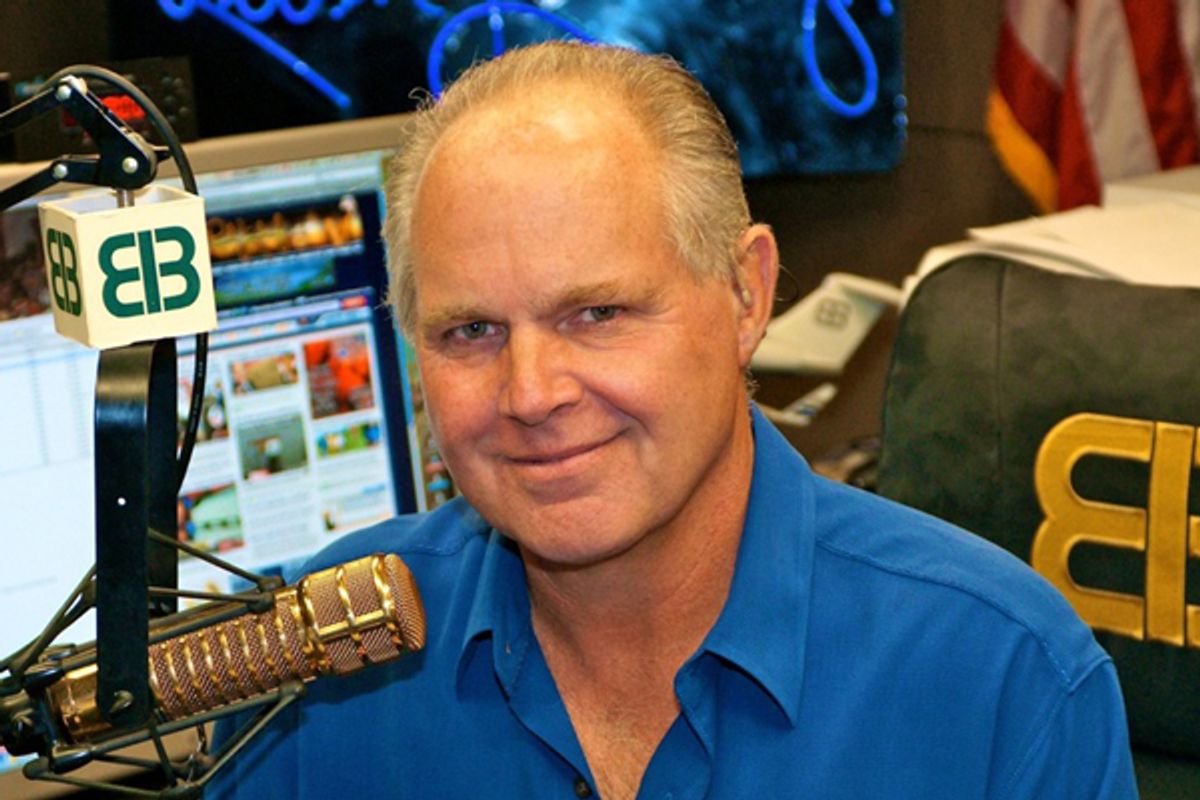 The declining influence of Rush Limbaugh has been a topic of discussion for some time now; for so long, in fact, that there's little left to discuss. Throughout the presidential election last year, if he was talked about at all, it was mostly in the context of how poisonous his divisive shtick has become to the Republican Party. That’s a far cry from the early 1990s, when the radio host changed the face of modern discourse with his ability to break down the country’s salient liberal-conservative divide into the most puerile of terms.

Now, Limbaugh is feuding with Cumulus Media Inc. (NASDAQ:CMLS) -- the company that broadcasts his radio program on 40 stations in 36 markets -- over who is to blame for an ongoing decline in advertising revenue. Lew Dickey, Cumulus Media’s chief officer, has been pointing the finger at Limbaugh, and in particular a grassroots advertising boycott that erupted in early 2012, following the infamous Sandra Fluke controversy. Limbaugh, in case you’d forgotten, called Fluke a “slut” and a “prostitute” after the Georgetown University student spoke out in support of insurance mandates for contraceptives. He later apologized -- profusely so -- but the damage was done. People were fed up, and they took to the Internet and social media to send a message to Limbaugh’s advertisers that they won't support any business that supports Limbaugh’s brand of radio rabble-rousing. Jittery over the response, advertisers began to bolt. Some never came back, including Geico, Sears, John Deere, Netflix, Capitol One and hundreds of others.

It has been 14 months since the controversy first began, and the boycott continues. Under the hashtag #StopRush, Twitter users signal out Rush-friendly businesses -- Dairy Queen, the Home Depot, Golfsmith -- telling them enough is enough, and in some cases hitting them where it hurts:

Hey @dairyqueen Are you still advertising on Limbaugh? I won't buy blizzards until you stop supporting hate radio #StopRush

IBTimes reached out to some of those advertisers for comment. Only the Home Depot responded. In an email, spokesman Stephen Holmes said the company does not advertise on Limbaugh's program, or any opinion show. “It’s been our policy not to sponsor opinion shows, which would include Rush or any others, for that matter,” Holmes said. “An ad might run occasionally during a news break, but those are programming errors that occur at local stations from time to time.”

Meanwhile, StopRush.net, keeps a running list of Limbaugh’s current sponsors, including phone numbers, emails and Twitter handles of the companies’ contacts. There’s even a Web browser extension -- launched by ThinkContext.org -- that helps users avoid businesses that advertise with Limbaugh. Of course, all of this comes with the usual online petitions from Change.org, SignOn.org and, yes, even WhiteHouse.gov.

And what’s been the result of this yearlong scourge of the companies responsible for Rush’s livelihood? It’s been working. That free-market system that conservatives are so fond of touting is operating with machinelike precision -- or at least that’s one way to look at Cumulus Media’s first-quarter results released on Tuesday. Adjusted Ebitda fell 22.1 percent from the same period last year, while net revenue fell 1.3 percent to $232.9 million due in part to “general lower advertising spending in some of our markets,” according to the company’s statement.

During a conference call with analysts, Dickey was asked if the decline can be attributed directly to the StopRush campaign. According to Daily Kos, his only response was to say that it was a “tough go of it in the last year and that the facts are indisputable.” He had a similar take in August when he reported that the company’s top three radio stations had lost $5.5 million in advertising revenue, which he attributed in part to the boycott.

One of the basic tenets of the free-market system is that the market participants choose what gets produced and from the looks of things, they’re not choosing Limbaugh. Not that Limbaugh himself sees it that way. On his radio show, he’s made it clear that he believes “media buyers at advertising agencies are young women fresh out of college, liberal feminists who hate conservatism.” And according to the New York Daily News, he's absolutely fed up with taking the blame for Cumulus’ advertising woes. On Sunday, Politico’s Dylan Byers reported that Limbaugh is even considering severing ties with Cumulus when his contract expires at the end of this year.

That would put Limbaugh’s show in potential limbo for Cumulus’s network of radio stations. The show could get picked up by competitors or Limbaugh could go the Howard Stern/satellite radio route, as Mediabistro’s Alex Weprin theorized on Monday. But even if that were the case, it wouldn't bode well for the host’s declining influence. When Stern made the transition to satellite, he was left with a fraction of his former audience. And while he’s publicly stated that he's happier without the FCC-imposed restraints of terrestrial radio, his recent judging gig on “America’s Got Talent” is proof enough that he missed the spotlight.

Could a similar path be in the cards for Limbaugh? Imagine him sharing a panel with Nicki Minaj and Mariah Carey on “American Idol.” It would certainly get people talking.