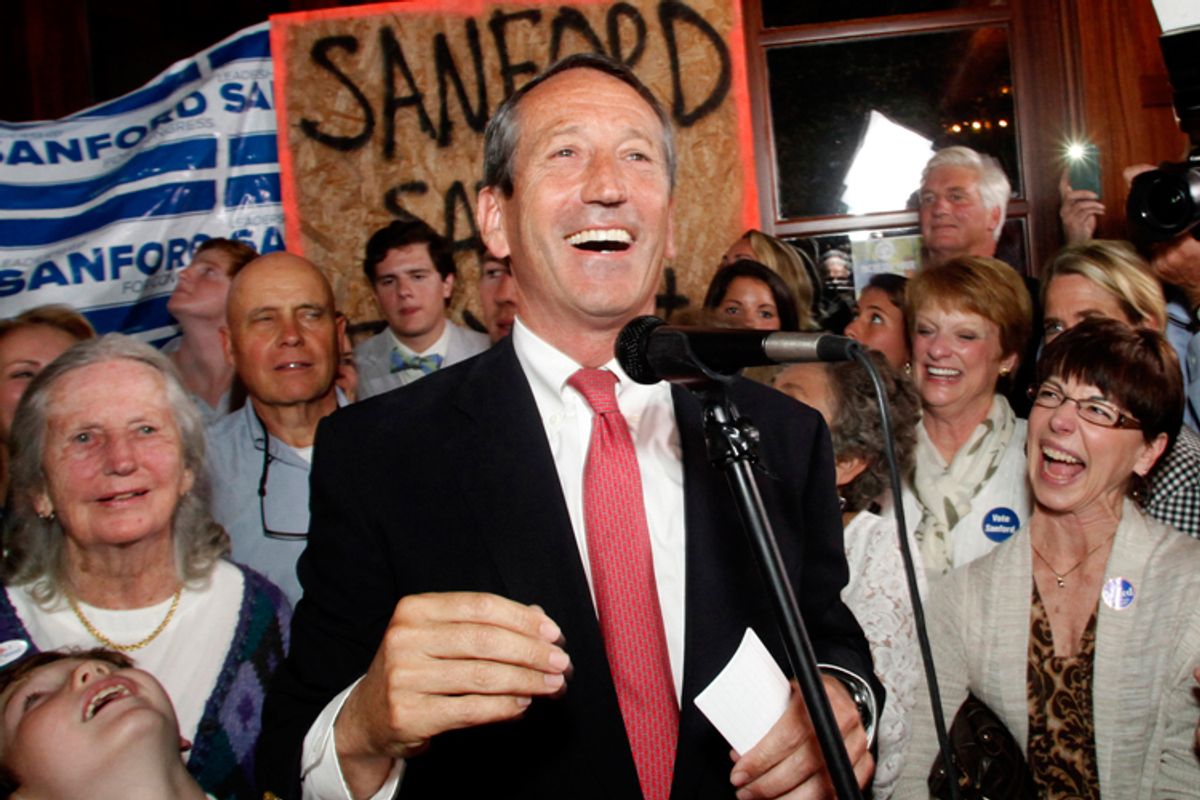 Mark Sanford, the former governor of South Carolina whose adulterous relationship was very strange and amusing, won a special election to the U.S. House of Representatives yesterday. And What Does It Mean? Not much. It means Mark Sanford is just palatable enough to win by 9 points in a district where, in 2012, Republican Tim Scott beat his Democratic opponent 62 percent to 36 percent. Mitt Romney won the district by 18 points. Democrats haven't picked up a Republican-held seat in South Carolina in 25 years.

The Washington Post's Chris Cillizza has it figured out:

Yes, underperforming for a Republican in a heavily Republican district, in a special election, is definitely proof that Sanford was a superior candidate, and not merely that he had an R by his name. If anything, Sanford's victory proves that candidates matter only in terms of ideology, not biography. In a very conservative district, the Republican candidate will win, even if he's a weird creep with a humiliating past.

The deal with Sanford was that the weirdness of his adultery was just an extension of the weirdness of the man. His creepy ultra-sincerity was on display in all those strange "Mark Sanford takes a reporter on an adventure for a few hours" stories from last week. (Along with his odd behavior toward women, both those he knows and those he doesn't.) There are weird stories about him digging holes on his property to relax. He was one of those ridiculous "slept on a cot as a congressman" conservatives who perform ridiculous stinginess to prove their conservatism. He flew first and business class at taxpayer expense basically all the time as governor, in violation of state law. He claims to get his hair cut at Supercuts, but he flew on a state plane to get that Supercuts haircut.

Sanford grew to seem sort of ... lovable, in a strange way, watching him bumble through the campaign. But once he returns to the House, he'll fit right in with the Republican Caucus. In 2010, Citizens for Responsibility and Ethics in Washington named Mark Sanford one of the worst governors in the country. The Cato Institute named him the best. In 2009, he wrote a (hilarious) Newsweek article about rediscovering Ayn Rand, whose work blew him away in the 1980s. He wanted to refuse stimulus funding -- free money, for his state -- and ended up refusing some of it. All of this was basically forgotten the second "Appalachian Trail" became a meme (though much of it would've only helped him win South Carolina's 1st), but all of it is so, so much more troubling, in a legislator, than his strange personal demeanor and habits and life.

So maybe what "Weird Objectivist Creep Mark Sanford Wins Election" means is not anything about the state of the 2014 or 2016 race, but rather about the Republican Party as a whole in the post-Bush era. The truly disturbing thing is not that Mark Sanford won a special election in 2013, but that he was ever considered a viable running mate option in 2008 or a 2012 presidential hopeful. There's really no hope for us, if the country insists on dividing its votes almost equally between the center-left party and the party of people who still think there's any redeeming quality in "Atlas Shrugged."

It was really not that long ago that people like Sanford were considered fringey weirdos even among Republicans. Now, confused Christian Objectivists could practically form their own House Caucus. Amusingly and terrifyingly, the financial crisis and subsequent recession have only strengthened the position of the people who believe that unchecked self-interest is its own best regulator. (Also, honestly, no one whose résumé includes Goldman Sachs should be remotely electable even in a Republican district. Maybe Cillizza's right! Colbert-Busch dropped the ball.)

Still, we can maybe look forward to him mounting a primary challenge against Lindsey Graham, which would be fun.