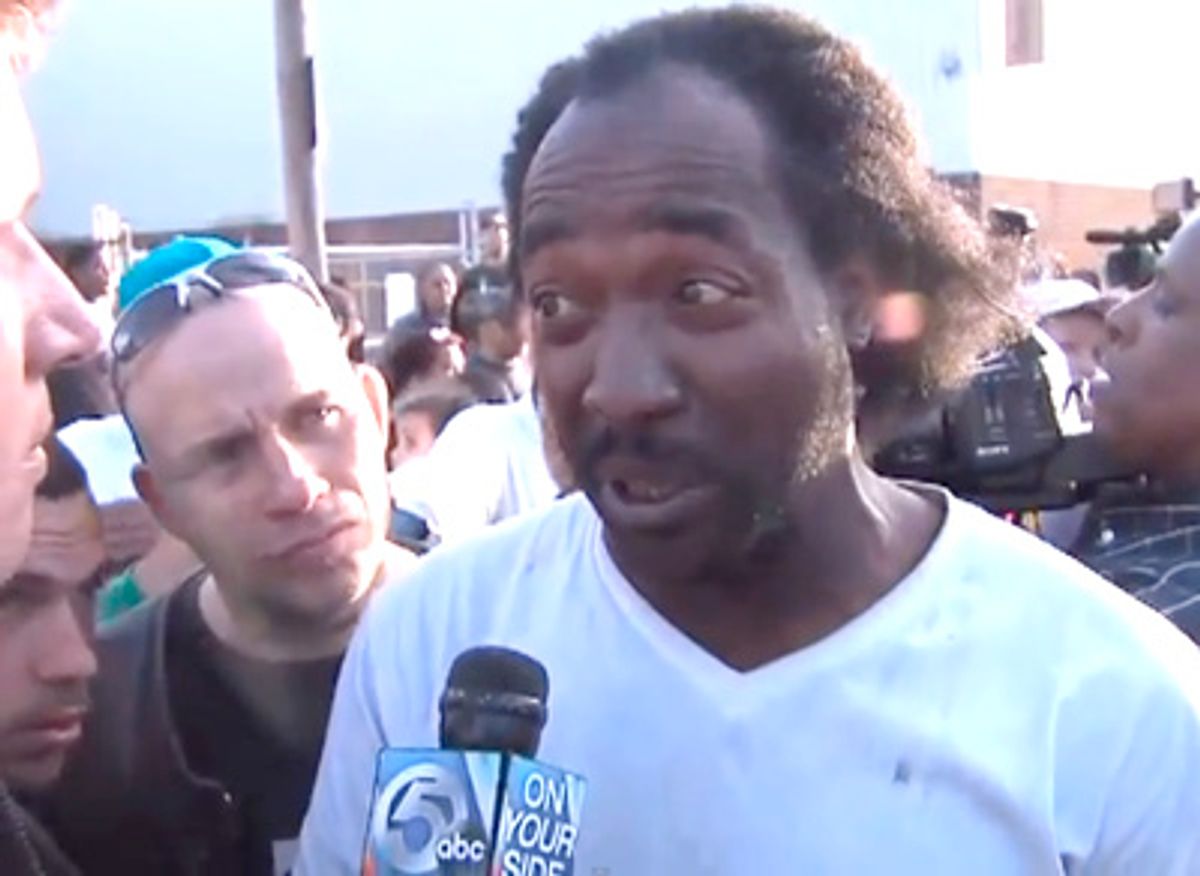 The Smoking Gun has reported that Charles Ramsey, who helped Amanda Berry escape after breaking down the door to Ariel Castro's home, has served time in prison for three separate domestic violence convictions.

As reported by the Smoking Gun:

Ramsey’s first domestic violence charge came in February 1997. He entered a no contest plea a year later and was found guilty of the count by a Cleveland Municipal Court judge. While waiting to be sentenced, Ramsey was again arrested for domestic violence.

At the time of Ramsey’s second collar, in July 1998, he was already the subject of an arrest warrant issued in connection with his failure to appear for a court hearing in the first domestic violence case. As a result, Ramsey was jailed for violating terms of his release on bond. Ramsey subsequently entered a no contest plea to the second case and was, again, found guilty by a Cleveland judge.

In 2003, Ramsey was indicted for felony "domestic violence with prior conviction,” as a result of the previous cases. It was in 2003 that Ramsey's wife, Rochelle, filed for divorce, citing “gross neglect of duty” and “extreme cruelty."

Rochelle went on to tell the Smoking Gun that Ramsey has since apologized to her for past abuse, and that the pair remain on an "okay basis."

Gina DeJesus returned home on Wednesday to cheers from neighbors and the flashbulbs of reporters.

"There are not enough words to say or express for the joy we feel for the return of our family member Gina," DeJesus' aunt, Sandra Ruiz told reporters.

"We are asking for your support to be patient with us. Give us time and privacy to heal. When we're ready, I promise you, we will talk to you," she said.

Ariel Castro has a history of domestic violence, as Salon has previously noted, and more details have emerged about his violent past in newly-obtained court documents. As CBS News reports, a 2005 order of protection filed by Castro's former partner and the mother of his children, Grimilda Figueroa, alleges that in addition to ongoing physical abuse against her, Castro "frequently abducts [his] daughters and keeps them from mother/petitioner/ legal custodian."

The full document can be found here.

Confirmed details of the harrowing kidnapping and decade-long captivity of Amanda Berry, Gina DeJesus and Michelle Knight remain few and far between, but one question seems to be on everyone's minds while the full story comes together: What did the neighbors know?

Reports from the Cleveland Plain Dealer say that kidnapping suspect Ariel Castro's neighbors witnessed naked women crawling on their hands and knees in the backyard, heard screams come from inside the house and watched as women pounded at doors and windows, desperately trying to escape. Each time, the neighbors say, they called the police.

As reported by the Plain Dealer:

Elsie Cintron, who lives three houses away, said her daughter once saw a naked woman crawling in the backyard several years ago and called police. “But they didn’t take it seriously,” she said.

[Neighbor Israel] Lugo, said he heard pounding on some of the doors of Ariel Castro’s house, which had plastic bags on the windows, in November 2011. Lugo said officers knocked on the front door, but no one answered. “They walked to side of the house and then left,” he said.

Lugo said he, his family and neighbors called police three times between 2011 and 2012 after seeing disturbing things at Ariel Castro’s home. Lugo lives two houses down from Castro and grew suspicious after neighbors reported seeing naked women on leashes crawling behind the house...

A third call came from neighborhood women who lived in an apartment building. Those women told Lugo they called police because they saw three young girls crawling naked with dog leashes around their necks. Three men were controlling them in the backyard. The women told Lugo they waited two hours, but police never responded to the calls.

Cleveland Police Chief  Michael McGrath has denied allegations of police inaction, saying there is no record of such phone calls. McGrath told NBC News on Wednesday that he was "absolutely confident" that his officers did not miss an opportunity to free the three women, but his department is now conducting an internal review to be sure that no leads were overlooked.

CBS News is reporting that suspect Ariel Castro is the primary focus of the investigation, and that there may be no evidence connecting Onil and Pedro Castro to the case:

It was Berry's first sight of the modest, two-story home since she disappeared on April 21, 2003 — a day before her 17th birthday — after telling her sister she was getting a ride home from her job at a Burger King.

Berry's sister, Beth Serrano, spoke briefly to reporters in front of the house to thank the public and the news media for their support and to request privacy for the family "until we are ready to make a statement."

"We are elated, this is a happy ending," a tearful Serrano said to applause and cheers from the crowd.

Amanda Berry has returned home, and is no longer expected to make a statement today.

Swarms of press have descended on Berry's family home, ignoring requests to give Berry and the two other victims privacy:

NBC News is reporting that, according to a police source, the three women have told investigators they were raped while in captivity, resulting in a series of pregnancies and miscarriages over the ten year period.

According to the police source, law enforcement officials are seeking to corroborate the women's accounts of horrific violence, and plan to make more details of the case available later in the day.

NBC News is reporting from a police source that the three women held captive for a decade were "bound with chains and ropes" and only allowed outside "once in a while" by suspects Ariel, Onil and Pedro Castro:

Chief Michael McGrath, speaking to NBC’s TODAY, said the account was based on initial interviews with the women, who were freed Monday night after one of them broke through a door and was rescued by a neighbor.

“We have confirmation that they were bound, and there was chains and ropes in the home,” he said.

He said that the women’s physical well-being was “very good, considering the circumstances.” During captivity, they were released “out in the backyard once in a while, I believe,” he said.

Cleveland authorities said that a search of the house had revealed no human remains.

McGrath went on to say that he was “absolutely confident” that his officers did not miss an opportunity to free Amanda Berry, Gina DeJesus and Michelle Knight, despite reports from neighbors alleging that the police had been called to the home numerous times over the past ten years.

According to a report from Fox News, a tip from one of the victims has sent Cleveland police on a search for more women who may be missing in connection with the case:

Details of a possible fourth victim came to light during police interviews with the oldest victim,  Michelle Knight, who reportedly said there was another girl at the home about 10 years ago, but disappeared.

In 2007, Ashley Summers, a 14 year old, disappeared in the same neighborhood. Initially it was believed Summers was a runaway but a few years later, police saw a potential link with the other missing girls.

Knight reportedly told police she was unsure of how many other women may have been in the house because they were all kept in separate locked rooms.

This week, law enforcement officials arrested brothers Ariel, Onil and Pedro Castro in the kidnapping of Amanda Berry, Gina DeJesus and Michelle Knight. The three suspects stand accused of holding the three women captive for a decade, along with other allegations of physical and sexual abuse.

As the facts of the case continue to emerge, court records, interviews with neighbors and family, and other reports from the last ten years paint a troubling portrait of the three suspects.

Ariel had a history of domestic violence and allegations of child neglect and abuse at his job as a school bus driver; Onil and Pedro both drank heavily and failed to hold down steady work, according to reports from the Cleveland Plain Dealer:

[Longtime friend of the Castro brothers Nelson Roman] said Pedro Castro, 54, was a straight-A student at old Lincoln High School. Roman said he would not have graduated from Lincoln High in 1976 without Pedro's help. But Pedro dropped out of school in his junior year when he became involved with alcohol. Roman said Pedro had worked a punch press machine in a factory, but he stopped working because he drank so heavily. He was getting Social Security benefits in recent years.

Roman said Onil Castro, 50, was much quieter than his brother Pedro. He also drank heavily. Roman said he has been receiving workers' compensation the past five years. He had made his living doing odd jobs; he was very versatile and a handyman until he got hurt working as a laborer...

Court records indicate Ariel Castro fought with his former wife, Grimilda Figueroa, over the custody of their children. Figueroa twice suffered a broken nose, as well as broken ribs, a knocked-out tooth, a blood clot on the brain and two dislocated shoulders, according to a 2005 filing in Cuyahoga County Domestic Relations Court. In the filing, her attorney requested that a judge "keep (Castro) from threatening to kill (Figueroa)."

Ariel also played in Latin band Grupo Kanon, and aroused his bandmates' suspicions by refusing to stay overnight after late shows in distant cities or allowing others to help him load gear into his home on Seymour Avenue: "He wouldn't let me pull up the driveway. Said there were nails or something," bandmate Ivan Ruiz told the Plain Dealer. "One time I asked, 'Do you want me to help you carry this stuff inside? It's heavy."

Those closest to the Castro brothers have expressed disbelief over the allegations, as well as shame and regret for not sensing something was wrong sooner. Neighbor and longtime acquaintance of the Castros Juan Perez said that Ariel's behavior over the last ten years, once considered odd but harmless, now seems like a series of red flags, as he told Ohio's NewsChannel5:

Now it's like, red flag, red flag, red flag, somebody should've said something. I'm not the only one on the block that feels ashamed to know that we didn't notice anything. I work at a school, I work with kids... I have a heavy heart right now.