Secrets of the NYPD 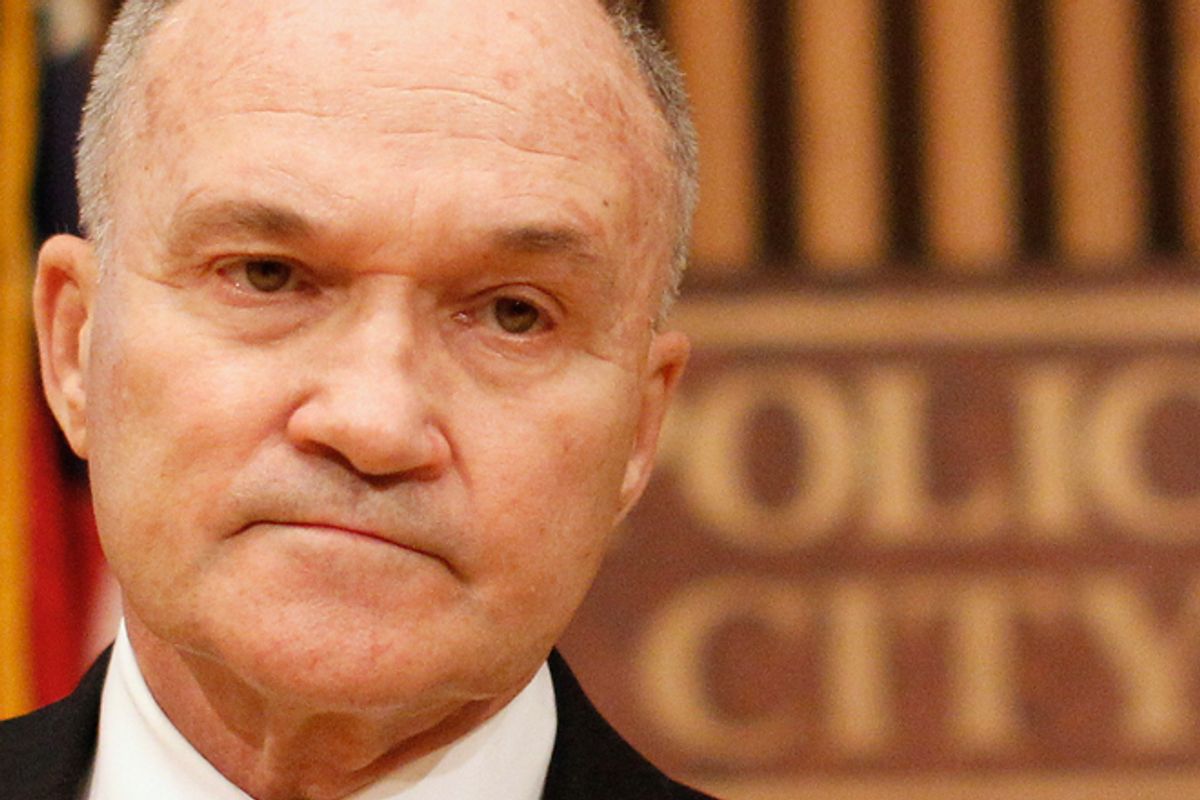 The New York Police Department has come under fire for the potentially unconstitutional execution of its stop-and-frisk policy, and surveillance of Muslims. But if you think that the taxpayer-funded agency should be accountable to the public and forthcoming about what it's doing, the story gets worse: It regularly flouts transparency laws, in an effort to make the records of how it perform its duties and the crimes it responds to next to impossible for the average citizen to obtain.

The NYPD’s roughly 34,500 officers serve a population of 8.2 million people, but multiple interviews with reporters who cover the police department, as well as organizations dedicated to transparency, reveal a police department stunning in its disregard for the information requests of citizens, advocacy groups and news organizations.

The city's Public Advocate Bill de Blasio, who is running for mayor, recently released a report asserting that a third of all Freedom of Information records requests to the police department were ignored. The numbers are no surprise to journalists who cover the department, such as Leonard Levitt, a veteran cops reporter who now writes at NYPD Confidential.

“All I can tell you is that the NYPD does whatever it wants to regarding FOI requests,” Levitt said. “Which means they never turn anything over, at least not to me. The only time they did respond was after I got the NY Civil Liberties Union involved.”

The civil liberties group filed suit on behalf of Levitt to obtain Police Commissioner Raymond Kelly’s daily calendar. The department said the commissioner’s whereabouts were secret for security reasons, which is a novel line of argument, given that President Barack Obama’s daily schedule is public.

Remapping the Debate, a public policy organization, filed a lawsuit against the NYPD in late April for withholding documents on protest permits. The group waited 11 months with no response before filing the suit.

“The documents sought are important to facilitating public understanding of how New York City has treated those seeking to exercise their First Amendment rights," Christopher Dunn, the associate director of the NYCLU, said in a statement. "Unfortunately, Remapping Debate's experience of having received no documents more than 10 months after the requests were made is all too typical of how the NYPD violates its Freedom of Information Law obligations.”

“We started down this path because in our view the NYPD really had a practice of not complying with FOIL no matter what the request was,” New York Times assistant general counsel David McCraw said. “By and large, there is a disregard of the concept of openness and transparency. They do the minimal amount, they delay unnecessarily, and they fight over exemptions that reasonable people wouldn't fight over.”

The Times’ suit has ping-ponged back and forth between the state’s trial and appellate courts with various degrees of success. Its request for gun permit data was denied, but the NYPD settled out of court to release the FOIL logs.

The result is many journalists on the crime beat in New York City don’t even bother filing records requests. Reporters have to cultivate friendly sources within the department who will slip them documents. Not terribly unusual or burdensome for good reporters, but it effectively locks out everyone else.

"It's certainly become very difficult to even get routine records via FOIL from the Police Department," Village Voice reporter Graham Rayman said. "Requests are denied almost as a matter of course, and then news organizations face the issue of whether it's worth the money necessary to sue."

In 2010, Rayman wrote a five-part series for the Village Voice about an NYPD officer who faced retaliation from the department after blowing the whistle on extensive efforts by his superiors to juke the stats.

The Village Voice spent the next two years trying to obtain a report commissioned by Chief Kelly on the officer’s claims. Its request was blocked, even though the report had been completed and was public record, according to state freedom of information law.

Back in October 2012, this reporter submitted a public records request for the discharge reports filed by NYPD officers over the previous year.

The impetus was the Empire State Building shooting, where it was reported that NYPD officers had wounded nine bystanders in a hail of gunfire intended to take down one gunman. (One of those bystanders, whose hip socket was crushed by an errant NYPD bullet, filed suit against the department earlier this year.)

I filed the public records request on Oct. 1. And then waited. On Jan. 11, I received this response:

This wouldn’t have been too surprising, if the denial didn’t contradict previous court rulings on those same records. A New York judge ruled two years ago — in response to a NYCLU lawsuit, naturally — that discharge reports are subject to disclosure, do not violate officers’ privacy and do not compromise the department’s investigative techniques.

Earlier this year, NYPD officers shot 16-year-old Kimani Gray seven times — four in the front and three in the back — so I filed another request. Even though I used identical language as the previous one, the NYPD said I had not reasonably described the records and denied my request.

Robert Freeman, the executive director of the New York State Commission on Open Government, said he’s seen a downward trend in the police department’s compliance with public records law over the years.

“I've been here since 1974,” Freeman said. “The track record of the police department, particularly in the last decade, indicates in so many instances a failure to give effect to the spirit and letter of the freedom of information law.”

“I look back at various mayoral administrations, and my feeling is that there was more of an intent to comply with the law in the era of Mayor [Ed] Koch than there has been since,” Freeman continued. “My sense has been that the downward slope began in Giuliani’s administration.”

There are positive developments, however. The New York City Council recently passed a law requiring the NYPD to fork over its crime data, so the city can make interactive crime maps. Such maps are common in other cities.

“The reason I like it is because when you have crime data up, you know where to put your resources,” New York City Councilwoman Gale Brewer said. “You have a sense of what's going on in the neighborhood, not just the police department, but human services and the community.”

The measure sprang to life after journalists at Bronx newspaper the Norwood News complained that the local police precinct had abruptly stopped supplying crime statistics. The reporters had to file records requests for the stats, which of course were delayed or sometimes just ignored.

But is there any justification for the NYPD’s poor performance when it comes to public records? Even open government advocates say the department’s one FOIL office is dealing with a huge amount of requests, which coupled with a huge jurisdiction and bureaucracy, make any form of efficiency a formidable task.

“There is a degree of sympathy,” Freeman said. “The requests all go through the FOIL office at 1 Police Plaza,” Freeman said. “I can understand why in some instances it would be difficult to locate records in Staten Island or the Bronx. But I think the implementation could be improved by providing individuals at the precinct level the ability to make basic judgments.”

Improving digitization and electronic filing at the NYPD would help, too, Brewer and Freeman said. The NYPD was one of 18 city agencies in 2012 still using more than 1,000 typewriters, and not just as a hipster fashion statement.

“Typewriters,” Brewer said, exasperated. “We about had a heart attack.”

CJ Ciaramella is a reporter for the Washington Free Beacon covering energy, transparency and FOIA issues. You can follow him on Twitter at @cjciaramella.