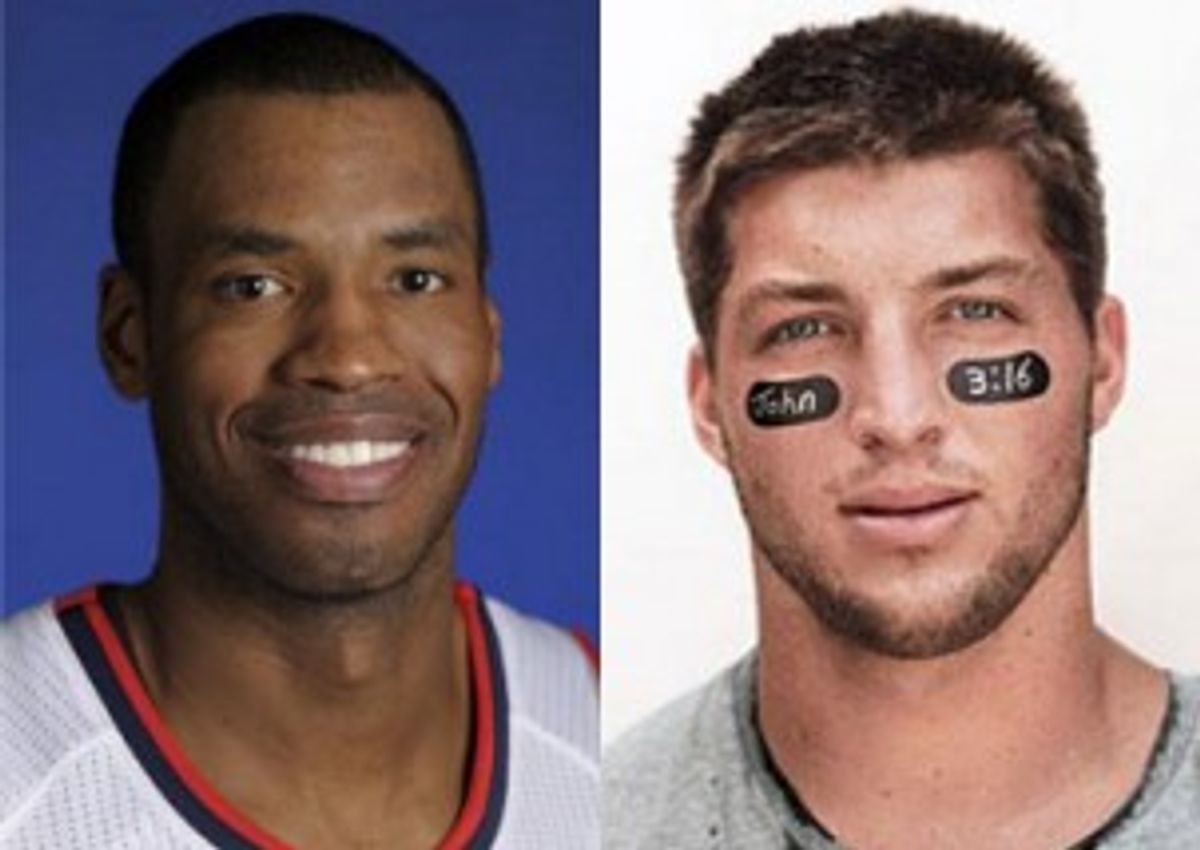 On April 29, the New York Jets released quarterback Tim Tebow from their roster after only a year on a team. In ironic timing, news almost immediately followed that Jason Collins, a veteran center in the NBA, had become the ﬁrst active male athlete in a major American team sport to come out as gay.

Collins and Tebow are a study in contrasts, perhaps especially when it comes to their faith. Tebow is known for game-saving theatrics and an equally performative profession of faith politicized by the culture wars. He’s positioned himself as an all-American poster child for the pro-life movement and homophobic groups like Focus on the Family. Collins, on the other hand, is a career role player who keeps his head down on the court and his devout Christian faith, rooted in family and community identity, private.

Where Tebow’s religiosity has been endlessly analyzed by the media and championed by the white religious right, the centrality of Collins’ Christianity and faith community in his decision to come out has been ignored. Collins’ faith hasn’t gotten the attention that his race has—apart from ESPN’s attention-grabbing decision to put Chris Broussard, a sports journalist with known, religiously-motivated homophobic views, on air to directly question him about his personal opinion of Collins’ Christian witness—in the process playing into popular narratives about black homophobia.

As Peter Montgomery notes here on RD, Collins pointedly mentions that his parents “instilled Christian values” in him. He credits “the teachings of Jesus… particularly the ones that touch on tolerance and understanding,” for helping him to accept others (and ultimately himself) unconditionally. In his behind-the-scenes proﬁle of how Collins’ historic interview came together, Jon Wertheim writes that the “deeply religious” Collins found spiritual validation for his plans to come out in a “daily prayer manual” that was a gift from his grandmother—speciﬁcally a passage he read just days before his announcement:

Collins’ now famous opening lines—“I’m a 34-year-old NBA center. I’m black. And I’m gay”—allude to the inseparability of blackness from sexuality in a culture that often expects black gay, lesbian, and bisexual people to choose one identity over the other. Collins makes the point, however, that his religious upbringing is just as integral to his identity as his race and sexuality. He discusses his faith and belief in acceptance in the same breath as he does his “close-knit” and supportive family, the Civil Rights Movement, and his “[celebration of] being an African American and the hardships of the past that still resonate today.” Collins’ statement of faith, like his coming out generally, is grounded in his black identity, community, and history.

Given his low proﬁle before coming out, it’s no surprise that Collins’ faith wasn’t a matter of public knowledge or discussion before this week. But the glossing over of his faith since his announcement is striking, especially given that the faith of black athletes often ﬂies under the radar of both the media and the religious right.

Tim Tebow is an example of how the public face of Christian athletes, like the public face of American Christianity in general, is overwhelmingly white—despite the fact that black Americans are the racial demographic most likely to identify as “very religious.” A recent Barna poll found that Tebow is by far the most well-known Christian professional athlete in the U.S. (with 83% awareness from the public), with retired white quarterback Kurt Warner a distant second at 59%. Robert Grifﬁn III (RGIII), a black quarterback who’s had a far more successful season with the Redskins than Tebow’s had with the Jets, trailed at 34%.

RGIII, like Tebow, is a former college star (he won a Heisman Trophy at Baylor, a Baptist university) with a penchant for spontaneous expressions of faith after big plays. But neither he nor Colin Kaepernick, another vocally Christian quarterback who led the San Francisco 49ers to the 2013 Superbowl, have been embraced by white Christians the way Tebow, Warner, and other white athletes have. This is perhaps exempliﬁed by a Christianity Today piece in which editor Mark Galli talks up Tebow’s “humble and morally upright” public persona while denigrating Kaepernick’s “pride” and dismissing his tattoos of Bible verses as “designed to inspire aggressive play.” Kaepernick, he insists, is not a role model (and he even goes so far as to lump him in with Ray Lewis, who’s played under the shadow of an indictment for murder since 2000), but Tebow is.

There are many reasons for this marginalization of black Christian athletes. Segregation and racism in American churches and media, and widespread ignorance of black religiosity, are partly to blame, but it’s also due to the fact that white evangelicalism is more politicized—or, perhaps more accurately, is differently politicized—than Black Church traditions tend to be. Collins’ faith, like that of many black athletes (even socially conservative ones), doesn’t ﬁt the model of public performance of religiosity, or culture war conﬂicts the media expects and the religious right demands of its spokespeople.

Black athletes often don’t wear their faith—or their politics—on their sleeves in quite the way Tebow, Curt Schilling, and other prominent white Christian athletes have. Devotion in Black Church traditions is often more of a personal, family, and community affair; less conducive to media theatrics. And the politics of black Christian traditions—reﬂected in Collins’ invocation of childhood visits to Martin Luther King Jr.’s home, and his recent visit to the MLK memorial—is more grounded in the Civil Rights Movement and ongoing efforts to address issues affecting black communities than it is in the culture wars of the white religious right.

So it’s no coincidence that black Christians in the public eye are often overlooked by the religious right and the media until they express religious opinions that ﬁt into the politicized framing of the culture wars (see: Bishop Harry Jackson, Ben Carson and, of course, Chris Broussard). In such a media culture, there’s little room for Christians like Collins, battling multiple stereotypes as a black, gay, pro athlete expressing his faith publicly.

Since Collins’ announcement, Christians and media commentators on the right have circulated a meme claiming that he is being celebrated for being gay, while Tim Tebow has been “bashed” and persecuted for being open about his faith. Peter Roff, writing for US News and World Report, complains that “the secular crowd, New York sports writers included, have never forgiven” Tebow for his public Christianity and that Tebow is being “chased off the ﬁeld in a ﬂurry of social media cat calls while Collins… gets the call from the president.” This, Roff concludes, is evidence of a “double standard” under which “gays increasingly get cultural acceptance while conservatives and Christians are treated like invaders from another planet.”

Matt C. Abbott, writing for Alan Keyes’ Renew America, amply illustrates the reality that black Christians—of whatever politics or persuasion—don’t exist in this mindset except as tokens who afﬁrm the conservative persecution complex. After ﬂoating the conspiracy theory that Tebow was cut from the Jets because of his beliefs (“an avowed Christian like [him] is someone they enjoy kicking to the curb”), Abbott cites a Catholic priest’s assertion that “there is no spiritual leadership [Collins] has claimed in order to lead him to chastity… [and] a mature sexuality.” This is followed by a lengthy quote from Ken Hutcherson, a black Protestant pastor and former NFL player, including his startling claim that “if anyone speaks against [the homosexual lifestyle and agenda] they will be the one disciplined or kicked off the team for being intolerant.”

This is the world as many on the religious right see it: not one in which Tebow is famous precisely because he’s a mediocre white quarterback who is vocal about his faith, nor one in which Collins and other black athletes who are also “avowed Christians” routinely get passed over by the media and the public—and certainly not one in which gay, lesbian, and bisexual people face systemic discrimination. Instead, they live in a world where Tebow, who according to Barna has a 73% favorability rating with the American public when it comes to his discussion of religion, is being vaguely persecuted for being a straight, white, Christian conservative man.