What Darrell Issa really wants out of Benghazi hearing

I worked on the GOP lawmaker's House oversight committee. He wasn't exactly known for his zest for oversight 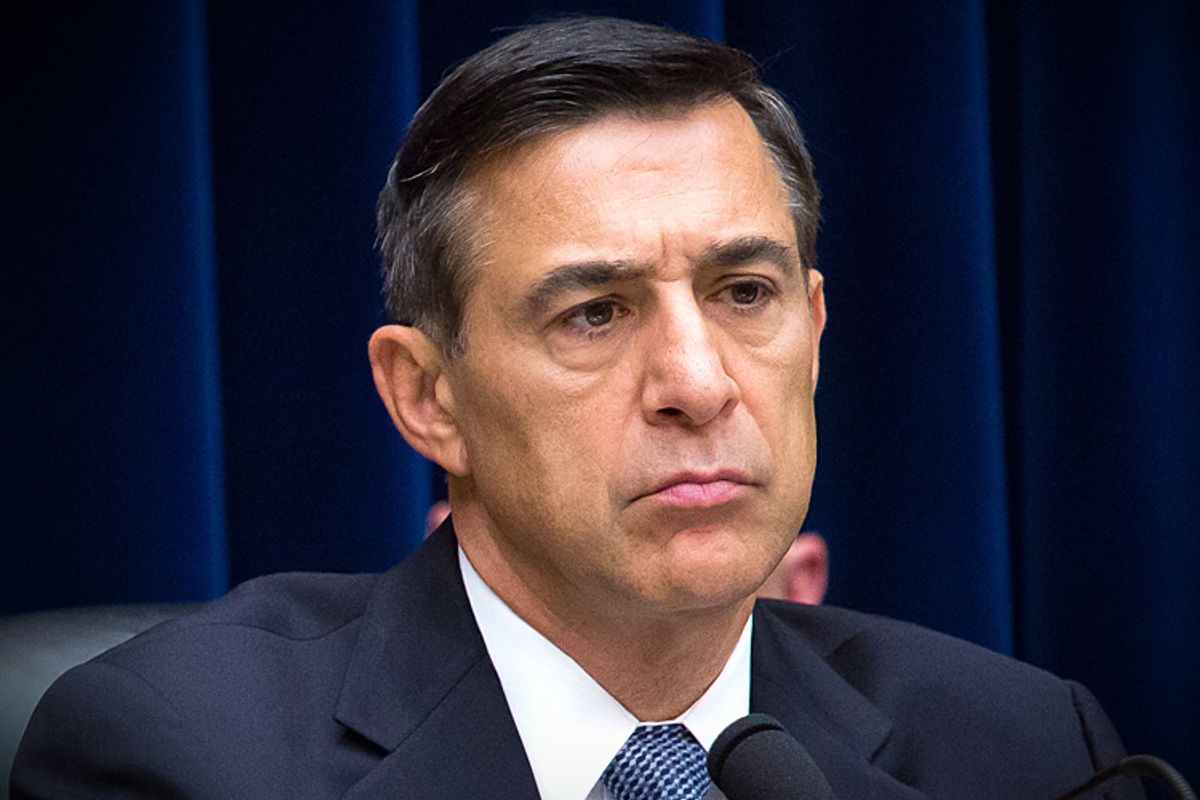 According to Darrell Issa, the chairman of the House Committee on Oversight and Government Reform, his hearing on Benghazi Wednesday was designed to reveal, among other potentially “explosive” points, that he has evidence of the administration’s “premeditated lying to the American people.” Issa previously said that there’s “no question” that someone from Hillary Clinton’s “circle” was involved in a “cover-up” following the attack on the U.S. consulate in Benghazi.

How seriously should Americans take Issa’s hearing and claims?

For almost four years, I worked in close proximity to him, first on the Democratic staff of the Oversight Committee (when he was ranking member) and then as legislative director for a senior member of the committee, when he was chairman. Here’s what I learned: If Darrell Issa says something – based on the record, his statements and my personal observations of him up-close – there is a strong likelihood it will be baseless and easily disproven.

Others have covered many aspects of his story. They have written about his alleged misdeeds, before and after he entered Congress. They have ably discussed Issa’s illegal disclosure of wiretaps; his irresponsible release of sensitive unredacted State Department documents; his political misuse of official funds; his use of his public office for personal gain; his inability to be honest about his own military service record; his treatment of his private business partners; his youthful (and not-so-youthful) experimentations with borrowing other people’s cars without permission; his failed attempt to recall and succeed Gray Davis as governor of California (and his Boehner-esque acceptance of his failure); his characterization of the Sept. 11 attacks as “simply a plane crash”; and his disregard for tradition, House rules and plain decency in the selection of Democratic Minority witnesses.

Sure, these and other issues call into serious question Issa’s integrity, or fitness to serve in the United States Congress, much less chair a House committee vested with personal subpoena power.

But I’d like to look instead at Darrell Issa, Oversight chairman. More so than most Republicans who’ve held that post – particularly in opposition to the party controlling the White House – he is exceedingly unsuccessful. (Full disclosure: Right after I started on the Oversight Committee, Issa protested my appointment because I had been critical of the Reagan Foundation’s efforts at political hagiography; nonetheless, I remained on the job.)

Observing him, it quickly became clear that, like all bullies, Issa is not prepared to fight. He counts on his opponents to back down. His M.O. is to make outrageous, unsubstantiated claims, follow them with a lot of bluster, and then quietly fold at the first sign of being challenged. And here’s his “tell”: The more bombastic he is, the more he hungrily seeks out the cameras, the more he promises “explosive revelations,” the less he actually has. Bullies don’t win fights; they win defaults. Push back just the tiniest bit, and it’s all over.

Even before Republicans took over the House after the 2010 elections, Issa made bold, empty assertions. He called President Obama “one of the most corrupt presidents in modern times.” He boasted that he would hold “seven hearings a week, times 40 weeks”  (that would be 560 hearings in just one Congress). He claimed he would save taxpayers $200 billion by rooting out waste, fraud and abuse. He said that he planned hundreds of investigations (he even promised to go after George W. Bush – which, not surprisingly, he has yet to do).

More than two years later, Issa hasn’t met any of his goals. Almost immediately, he was forced to walk back his baseless “corruption” charge. In the 112th Congress, he didn’t call as many hearings as Henry Waxman, Democratic chairman, held during the last two years of the Bush administration. Now, with Benghazi, he says he really has something solid. Just like he did with Solyndra. And “job-killing” regulations. And Fast and Furious. The list goes on.

The effectiveness of any committee is measured first by its legislative output and second by the quality and success, or failure, of its investigations. In the first instance, it’s about those bills that pass through the committee and become law, not the bills that are introduced and referred to the committee (thousands are introduced each session of Congress). And it’s not about the bills that the committee sends to the floor but that never pass. It’s about the laws that are enacted. In the second instance, it’s about how you investigate as much as it is about what or whom. On both measures, Issa’s record speaks for itself.

His committee not only has jurisdiction to investigate the federal government, but is the authorizing body for a wide range of federal agencies and programs. So has he successfully shepherded bills to root out waste, fraud and abuse? To make the government more efficient? To create more jobs? To save taxpayers money? His first, and what I guess must be called his most significant legislative accomplishment to date, was extending the charter for the Ronald Reagan Centennial Commission.

That’s right. Despite his extravagant claims and his loud calls for accountability, after six months of empty threats, by June 2011 the only bill from his committee to be enacted into law was H.R. 1308, to extend the commission’s termination date. Well, that, and one bill renaming a post office.

By June 29, 2012 – the date of Issa’s Third Semiannual Activities Report – after 18 months of partisan hearings and so-called investigations and inflammatory accusations, the total number of bills from his committee enacted into law was exactly four: The Reagan Centennial extension; the Civilian Service Recognition Act (authorizing the presentation of a flag to the family of a federal employee killed in the line of duty); the Scholarships for Opportunity and Results Technical Corrections Act; and S. 1302, “a bill to authorize the administrator of general services to convey a parcel of real property in Tracy, Calif., to the City of Tracy.” Oh, and 25 additional postal renamings.

He hasn’t done much more. That is, other than the plan he engineered to hold Attorney General Eric Holder in contempt of Congress – the one that only brought shame on Issa, rather than his intended target. In his underlying “investigation” Issa ignored the pre-Obama origins of the Fast and Furious operation and appeared never to have any intention of getting to the bottom of Brian Terry’s death; he simply smelled “scandal,” took advantage of a tragedy and irresponsibly fanned the flames.

Issa’s also not what one might call a student of congressional process. On July 14, 2011, during a hearing on the Consumer Financial Protection Bureau, he became confused about subpoenas; as the only chairman in the House to hold personal subpoena power, it was disconcerting to learn that he was unclear about such a basic – and, in this hearing, relevant – procedure. He recessed the hearing to consult with the House Parliamentarian. When the committee reconvened, John Tierney, a Massachusetts Democrat and attorney, ably explained to Issa how subpoenas work, but Issa was getting more argumentative and/or lost. Tierney, clearly frustrated, finally asked Issa, “What part of the English language, sir, don’t you understand?” and drove home his point. Issa’s weak response was a timid, “I appreciate that.”

It’s not just hearings, Hill social functions, and "Real Time With Bill Maher" where Issa is awkward and ineffective. With his chairmanship comes the responsibility to manage committee bills on the floor of the House, where he’s unfamiliar with proper procedure – odd, given his length of service and current position as chairman. When Issa wings it, he just embarrasses himself.

My favorite example of this came on Feb. 11, 2011, when the newly empowered GOP staged a stunt on the House floor to “debate” H.Res. 72, a non-binding resolution directing agencies to review their so-called job killing regulations. It had overwhelming support from both parties and passed the House the next day 391–28. Despite the fact that Democrats publicly announced their intention to vote for the resolution and requested that the GOP spend the time more effectively, the majority went ahead with nine and an half hours of debate, divided among and controlled by the respective chairs and ranking minority members of the standing committees of the House.

I was on the floor during this debate, staffing my boss (having written the statement he would give as a member of the Oversight Committee). When it came time for Chairman Issa to control the time, he didn’t handle it well – especially not when Democrats were allowed to speak. He became argumentative and testy, nitpicking minor items about what the majority said.

After my boss finished speaking, Issa was visibly upset, and tried to do something very serious, and rare: have a member’s words taken down as “inappropriate.” This is a procedure that, if successful, not only strikes the words from the record but prevents the member from speaking on the floor again that day without the permission of the House.

Except, unsure of himself and of the rules – and whether Clay’s statement did indeed violate House rules (it didn’t) -- Issa messed up the entire thing. He asked hypothetical questions (not in order), never had the courage to actually move that Clay’s words be taken down, and ended up muttering something about the words being “likely to have been inappropriate.” Here's the official transcript from the Congressional Record:

Mr. ISSA: Madam Speaker, I have a parliamentary inquiry.

The SPEAKER pro tempore: The gentleman will state his inquiry.

Mr. ISSA: Under the rules of the House, isn’t it true that the limitation on taking down somebody’s words based on casting aspersions or specific actions against an individual, for example, not caring about Americans or wanting children to die for lack of regulation – isn’t it true that we can only do that if they cite a person, not the Republican Party as a whole?

The SPEAKER pro tempore: The Chair does not respond to such a hypothetical question.

The SPEAKER pro tempore: The gentleman will state his inquiry.

Mr. ISSA: Would it be in order for me to bring a motion to take down the words based on that accusation that was just made against my entire party, alleging that we want to roll back so that children are not protected and the like?

The SPEAKER pro tempore: The Chair can not issue an advisory opinion. Is the gentleman from California making such a demand?

Mr. ISSA: Would it be in order for me to make such a demand?

The SPEAKER pro tempore: The Chair can not respond to such a hypothetical question. If a demand is made, the Chair will follow the regular process.

Mr. ISSA: Madam Speaker, I think we’re bigger than those accusations, regardless of it being likely to have been inappropriate by any standard. With that, I yield 2 minutes to the gentlewoman from New York.

That's Darrell Issa, Oversight chairman. The one Democrats are supposed to fear.