Has the Onion gotten too mean?

Ex-Onion writer: "I see a cultural cycle of this increasing savagery, and the boundaries are washing away." 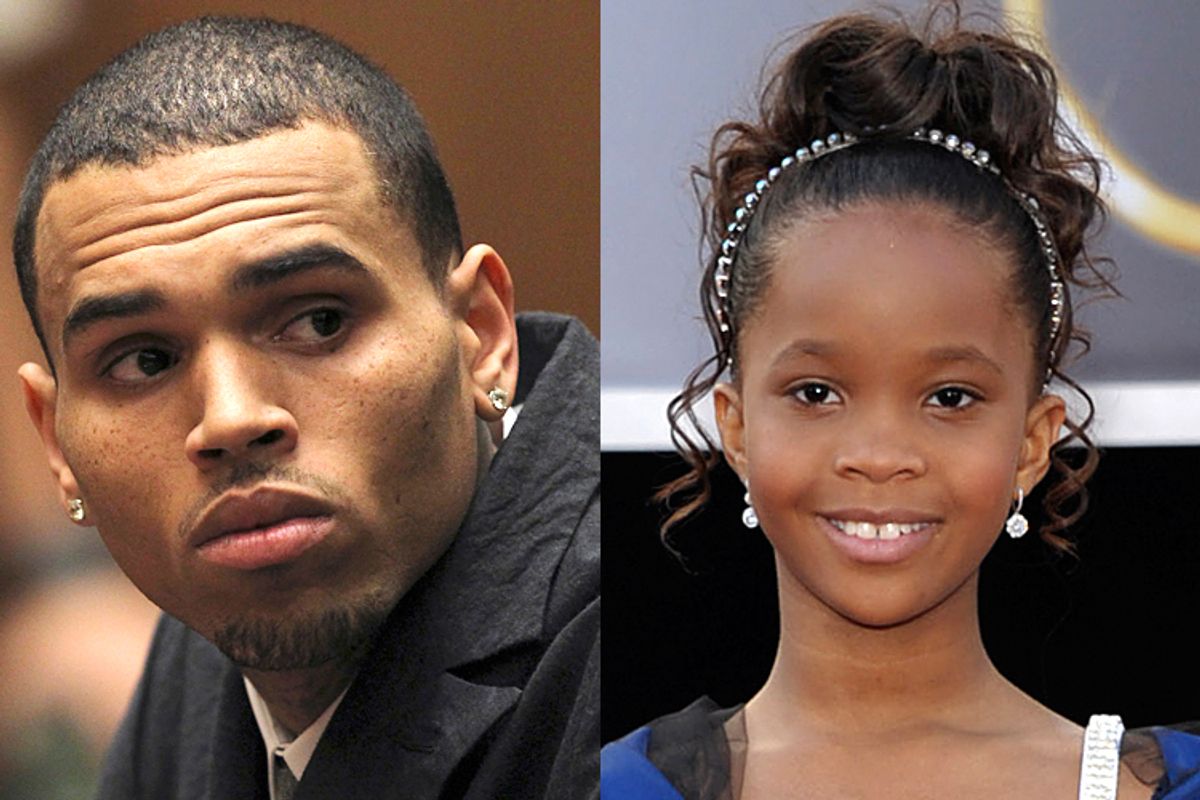 The tweet sparked a controversy that practically overshadowed Wallis' achievement (she had been the youngest best actress competitor ever), on a night that was full of coarse humor at women's expense, as when Oscar host Seth MacFarlane rhapsodized about female attendees' "boobs" in his opening number. After years as a pitch-perfect and fiercely intelligent comedic voice with just the right amount of moral outrage, the Onion seemed, for a moment, like just another crass, knuckle-dragging comic. The company's CEO even apologized for the tweet, an astounding step for a satirical publication. The writers published a self-mocking piece: "[T]he last five or six days in particular constitute a veritable high watermark for the company."

This week, the Onion pushed against the line again, with an article titled "Heartbroken Chris Brown Always Thought Rihanna Was Woman He’d Beat to Death." Pegged to the breakup of R&B's most tempestuous couple (Brown savagely beat Rihanna in 2009), the article was roundly criticized for a graphic description of how, precisely, Brown might have someday murdered Rihanna. (Meanwhile, Hanna Rosin, at Slate, opined that the piece was funny, noting that "this item brings more attention to domestic violence that 100 earnest blog posts on the same subject ever could.")

But though both pieces could be read as mocking and objectifying black women, the Wallis and Brown items aren't the only recent Onion jokes that have felt mean, where the Midwestern earnestness of the site's glory days have slipped into nastiness, or simply where the target has seemed slightly off. After the Brown piece sparked controversy, a simply bizarre guest op-ed purportedly by the three Ohio kidnap victims exhorted: "Men Are The Best"!

And, look, we’re not saying men don’t have their flaws. Oh, sure, once in a while they’ll get you pregnant and then lock you in a darkened room for 10 or so years while they viciously beat you until you lose the baby and almost die, but hey, we all have our own little quirks, right?

On less nuclear topics, the publication was as tone-dead. An item on "Loud, Desperate Need for Approval" leading the Tony nominations felt caustic and not terribly acquainted with the current theater scene. The Onion's response to its Twitter feed being hacked by the Syrian Electronic Army was to suggest that the hackers were about to die violent deaths in that nation's strife. Pieces about the NRA have posited that Aurora, Colo., shooter James Holmes could lead the organization and that, in a deadpan, near-jokeless piece, that the NRA had "won."

Of course, when it comes to what's funny or not funny, one's mileage may, as the saying goes, vary. What you find hilarious, someone else might find horribly unfunny or gratuitously mean. But while any one of those Onion jokes might not be cause for concern, taken together they suggest an organization whose masterful light touch is slowly eroding into bile.

The Onion, which was founded at the University of Wisconsin-Madison in 1988, rose to prominence with its still astoundingly sensitive coverage of Sept. 11, 2001 ("Not Knowing What Else to Do, Woman Bakes American-Flag Cake," read one headline). Aided by the continued rise of the Web as time-killing mechanism at desk jobs, the Onion's classic pieces tended to poke fun at "area men" and women whose foibles were relatable. If that sounds quaint, it wasn't -- the Onion was biting, but always allowed its subjects to be in on the joke, rather than the target.

Compare these two jokes, however: "Newly Out Gay Man Overdoing It," from 2002, managed to thread the needle of mocking a gay person specifically and gay culture broadly in a chiding, almost loving manner. But a 2012 Onion video titled "Area Man Can't Imagine Life Without This Woman," illustrated by an unflattering photograph, simply makes the very  idea that an average-looking woman could be lovable the substance of the joke.

The Onion has not been immune to the sort of economic pressures that plague nearly all publications of late: The Onion's print editions ceased publication last year (a circumstance the Onion satirized, claiming that a family's decision to halt their Christmas letter would cost "37 jobs"). Ouch. That same year, the Onion moved its headquarters from New York to Chicago, leading to massive turnover. Affiliate site the AV Club, a pop-culture news site, has also recently seen departures, as former staffers prepare to launch a new product.

One former Onion contributor told Salon that the publication's shift in tone is just a sign of the times. Max Cannon, who collaborated with Onion writers and wrote the absurdist comic strip "Red Meat" for the paper, compared the paper to two popular and savage Comedy Central hosts: "They might be pushing the boundaries more, but if you look at what's funny now, look at Daniel Tosh or Anthony Jeselnik. Humor goes through cycles and so does culture. We're on an escalating-savagery cultural cycle. I see a cultural cycle of this increasing savagery, and the boundaries are washing away."

"You can still find outlets for quaint, feel-good humor," said Cannon. "But I don't think anything's off limits humor-wise." He also noted that the echo chamber of social media had given currency to stories that may have simply escaped notice in the past: "I don't perceive a shift, but maybe things have gotten more attention."

Either way, the Onion is now competing not merely against websites in its competitive space -- where it was always a leader -- but against a universe of comedians with podcasts and random funny people on Twitter. The Onion's attempts to launch its own TV franchises (Comedy Central's "Onion SportsDome" and IFC's "Onion News Network") have both been canceled. In a time of tightening margins and competition from sharp, mean opponents on every side, it's little wonder that the Onion published this headline just after Christmas: "Man Returns to Work After Vacation With Fresh, Reenergized Hatred for Job." The website put it another way in a recent, apparently satirical, job posting:

The most competitive candidates will display a strong understanding of The Onion’s unique brand and readership, and also understand that our executives, editors, and writers are emotionally tangled miserable husks of humanity with a plethora of mental issues and life regrets to discuss. Good luck!