How drones deceive us

The advantage of technologized warfare is also its most worrying: The perception of decreased risk to the aggressor 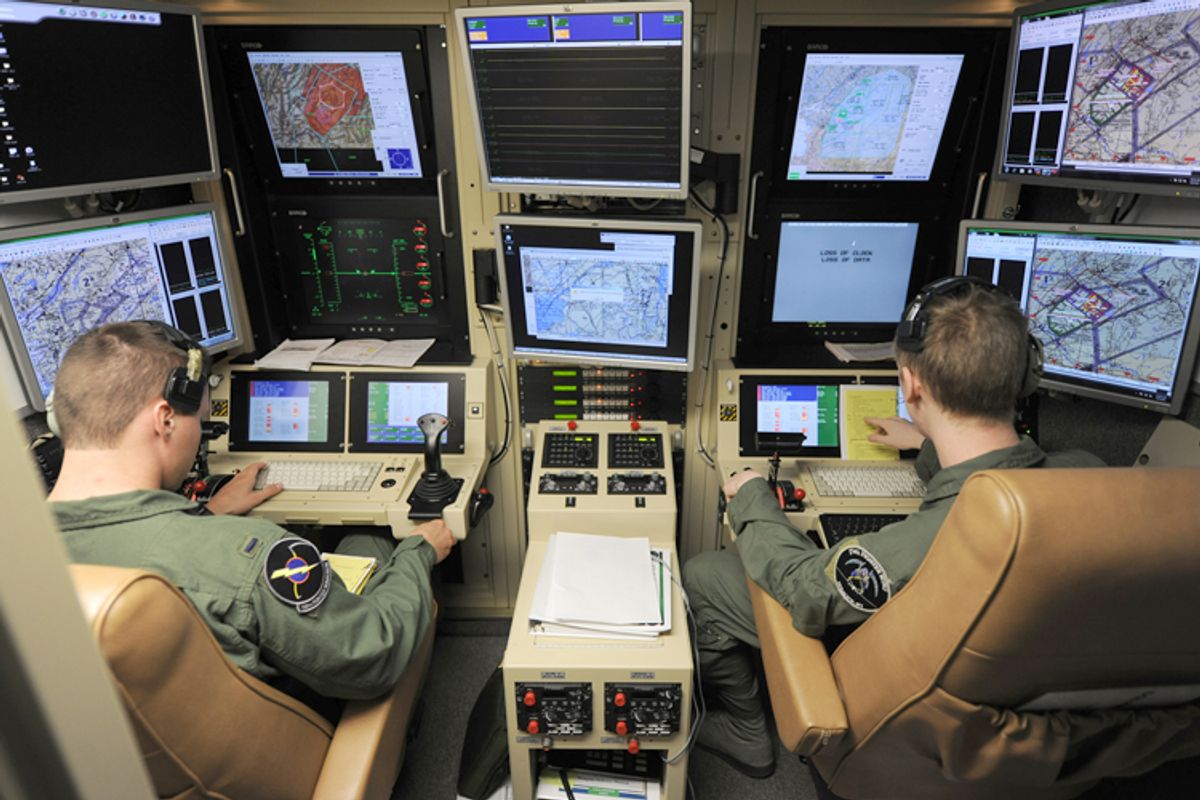 In the brave new world of technologized warfare, every week seems to bring a new sci-fi-movie-worthy revelation about America's ongoing drone operations. This past week was no exception. From the lawyer who first outlined White House policy on drone attacks, we learned that the government is likely using such attacks instead of capturing alleged terrorists, all to avoid the thorny legal issues that come with prisoner detainment. From the United Nations, we learned that the world may be closer to seeing its first self-directed Terminator-style killing machines -- technically called "Lethal Autonomous Robots" -- than many may have previously thought.

These kind of stories will continue for one big, if unstated, reason: robotic warfare seems to hold the promise of making many things easier, cheaper and less risky, at least for the countries that operate the drones. But the operative word is "seems," for drones involve a problematic illusion that distorts our perception of the risks we face.

Before examining that illusion, let's first review why drone technology seems so appealing to policymakers:

This latter characteristic explains the genie-out-of-the-bottle quandary in trying to curtail the drone war. In short, once a technology purporting to simplify and reduce risk hits a market, it is difficult to constrain that technology because its seemingly beneficial attributes prove irresistible.

The trouble with drones, of course, is that those positive attributes are also their most problematic. Indeed, the perceived risk reduction and simplicity of drone strikes ends up removing a critical deterrent to unnecessary violence, namely, the perceived possibility of casualties for the aggressor. Though nobody would -- or should -- hope for any kind of casualties, the fact remains that without that deterrent, drone-armed nations run the risk of seeing robot-administered violence as the best -- if not the only -- problem-solving option.

A little-noticed study from the British government's Ministry of Defence explained how this works in practice. The report quotes Robert E. Lee saying, "It is well that war is so terrible – otherwise we would grow too fond of it." It then asked: "If we remove the risk of loss from the decision-makers’ calculations when considering crisis management options, do we make the use of armed force more attractive? Will decision-makers resort to war as a policy option far sooner than previously?"

British government actions suggest the answer is "yes." As the report notes, the United Kingdom's decision to wage war in Pakistan and Yemen came about precisely because Britain possessed drones and could therefore prevent British casualties.

"The use of force is totally a function of the existence of an unmanned capability," the report concluded. "It is unlikely a similar scale of force would be used if this capability were not available."

The same principles apply to the United States' military actions. Throughout history, the one proven check on the unbridled militarism has not been Congress, the Constitution, foreign casualties or unsustainable Pentagon budgets; it has been the perception of life-and-death risk to the wider citizenry. When conscription ended in 1973, that perceived risk for most Americans was reduced and, not coincidentally, we've seen our government feel freer to engage in longer and more risky military adventures than ever, and without fear of widespread opposition.

Now with drone warfare, the same government perceives that violence comes with even less immediate life-and-death risk for our country, and consequently our technologized violence is expanding. Indeed, according to the New York Times, the U.S. government feels so uninhibited that it has moved beyond targeted killing to "drone attacks based on patterns of activity" -- attacks aimed at locations without actually "know(ing) the identity of the targets." Among the general population, it's much the same dynamic: With drones seeming to make war less risky, there hasn't just been little opposition to the drone war; polls actually show strong support for continuing the robot onslaught, even as we learn about its deplorable civilian casualties.

But in those casualties exist the pernicious lie of drone technology, the lie that suggests drone warfare is ultimately a consequence-free endeavor for the drone-wielding nation.

With mounting evidence that America's massacre of foreign civilians is creating more terrorists than it is neutralizing, and with terrorists citing our drone operations as motivations for their plots against us, there are consequences; they are just different than what we're accustomed to. They aren't, say, traditional counter-volleys on a declared battlefield. Instead, they are more like the Boston bombing, aka asymmetrical terrorist attacks against nearly impossible-to-protect soft targets.

Even if you are a coldhearted boor who proudly claims not to care about dead children in faraway places, self-interest should help you understand the problem. It's simple: Drones are deceiving us into believing we face no consequences to violence, even though the principles of blowback are every bit as powerful as they ever have been. Put another way, machines are tricking us into believing that actions no longer generate reactions when, alas, they still do.

The sooner we remember that principle and apply it to our thinking about technologized warfare, the sooner we can slow the cycle of violence and start truly strengthening America's national security.