Police say they were bound by ropes and chains, and kept in separate rooms 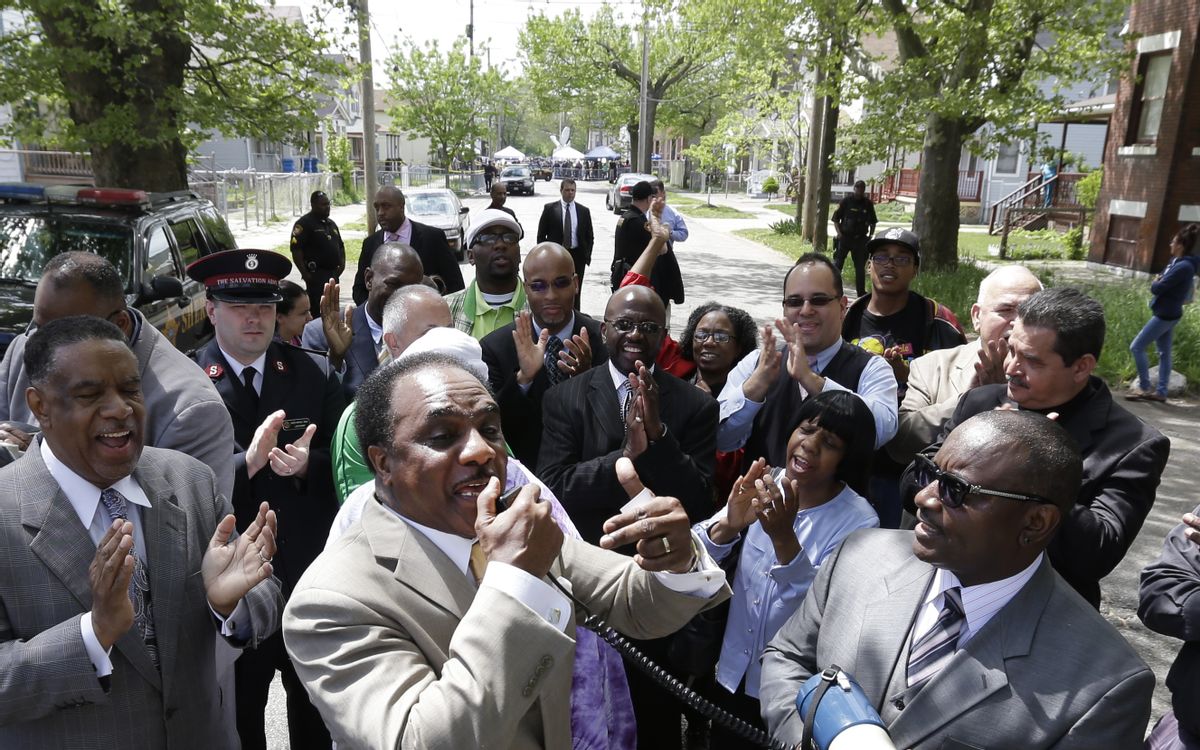 Pastor Larry Harris, center, leads a prayer vigil near the home where three women held captive for a decade, in Cleveland, Ohio, Wednesday, May 8, 2013. (AP/David Duprey)
--

CLEVELAND (AP) — Three women found alive after a decade in captivity endured lonely, dark lives inside a dingy home where they were raped and allowed outside only a handful of times in disguises while walking to a garage steps away, investigators say.

The 52-year-old former school bus driver accused of kidnapping and raping the women will make his first public appearance in court Thursday after emerging as the lone suspect.

While many questions remain about how Ariel Castro maintained such tight control over the women for so many years before one of them made a daring escape Monday, the horrors they suffered are beginning to come to light.

Police say the women were apparently bound by ropes and chains at times and were kept in different rooms. They suffered prolonged sexual and psychological abuse and had miscarriages, according to a city official briefed on the case.

Castro has been charged with four counts of kidnapping — covering the captives and the daughter born to one of them — and three counts of rape, against all three women.

The women and Castro have given lengthy statements to police that have helped build their case, said Deputy Police Chief Ed Tomba.

None of the women, though, gave them any indication that Castro's two older brothers, who've been in custody since Monday, were involved, Tomba said. Prosecutors brought no charges against the brothers, citing a lack of evidence.

"Ariel kept everyone at a distance," Tomba said.

One thing that remains a mystery, he said, is how the women were kept in the house so long.

"As far as the circumstances inside the home and the control he may have had over those girls ... I think that's going to take us a long time to figure that out," he said.

At a news conference, authorities would not discuss the circumstances of their kidnapping and captivity.

City Councilman Brian Cummins earlier said: "We know that the victims have confirmed miscarriages, but with who, how many and what conditions we don't know."

"It sounds pretty gruesome," he added.

They never saw a chance to escape over the last 10 years until this week when Amanda Berry broke through a door and ran to freedom, alerting police who rescued the other two women while Castro was away from the house.

In newly released police audio tapes, a 911 dispatcher notifies officers on Monday that she's just spoken to a woman who "says her name is Amanda Berry and that she had been kidnapped 10 years ago."

An officer on the recorded call says, "This might be for real."

After police arrive at the house, women can be heard crying in the background. Then an officer tells the dispatcher: "We found 'em. We found 'em."

Tomba said of Berry, "Something must have clicked and she saw an opportunity and she took that opportunity."

He said the women could remember being outside only twice during their entire time in captivity. "We were told they left the house and went into the garage in disguise," he said.

Also in the house was Berry's 6-year-old daughter. A paternity test on Castro was being done to establish whether he fathered the child.

While prosecutors announced charges against Castro, federal agents searched a vacant house near where the women had been held. Officials would only say their search was an attempt to get evidence in the case against Castro, but they refused to say what they found or what led them there.

Castro was in custody and couldn't be reached for comment. A brother-in-law has said the family was shocked after hearing about the women at the home.

Few people in Cleveland, outside the families of the women, thought there was any chance they were still alive.

Berry, 27, and Gina DeJesus, who is in her early 20s, were welcomed home Wednesday by jubilant crowds of loved ones and neighbors with balloons and banners. Family members hustled them inside, past hundreds of reporters and onlookers.

"This is the best Mother's Day I could ever have," said Nancy Ruiz, Gina's mother. She said she hugged her daughter and didn't want to let go.

Ruiz said she spent time with all three women after they were rescued. "There's no word to describe the beauty of just seeing them," she said.

DeJesus' father pumped his fist after arriving home with his daughter, and urged people across the country to watch over the children in their neighborhoods — including other people's kids.

"Too many kids these days come up missing, and we always ask this question: How come I didn't see what happened to that kid? Why? Because we chose not to," he said.

The third captive, Michelle Knight, 32, was reported in good condition at Metro Health Medical Center, which a day earlier had reported that all three victims had been released. There was no immediate explanation from the hospital.

The Associated Press does not usually identify people who may be victims of sexual assault, but the names of the women were widely circulated by their families, friends and law enforcement authorities for years during their disappearance.

Castro was accused of twice breaking the nose of his children's mother, knocking out a tooth, dislocating each shoulder and threatening to kill her and her daughters, according to a 2005 domestic-violence filing in Cuyahoga County Domestic Relations Court.

The filing for a protective order by Grimilda Figueroa also said that Castro frequently abducted her daughters and kept them from her. Figueroa died in April 2012 after a battle with cancer.

Figueroa's father, Ismail Figueroa, said Wednesday that Castro would regularly lock his daughter inside a second-floor apartment in the house where they lived when they were first together.

Later, when they moved a few blocks to the house Castro purchased — the house from which, years later, the women would escape — he kept a close eye on her and refused to let people come inside to visit her or even let her pick up their children from school, said Angel Villanueva, who is married to Grimilda Figueroa's sister.

Grimilda was "not allowed to go nowhere," said Villanueva. No matter where she wanted to go, "it had to be with him."