The Cleveland kidnapping could have been stopped 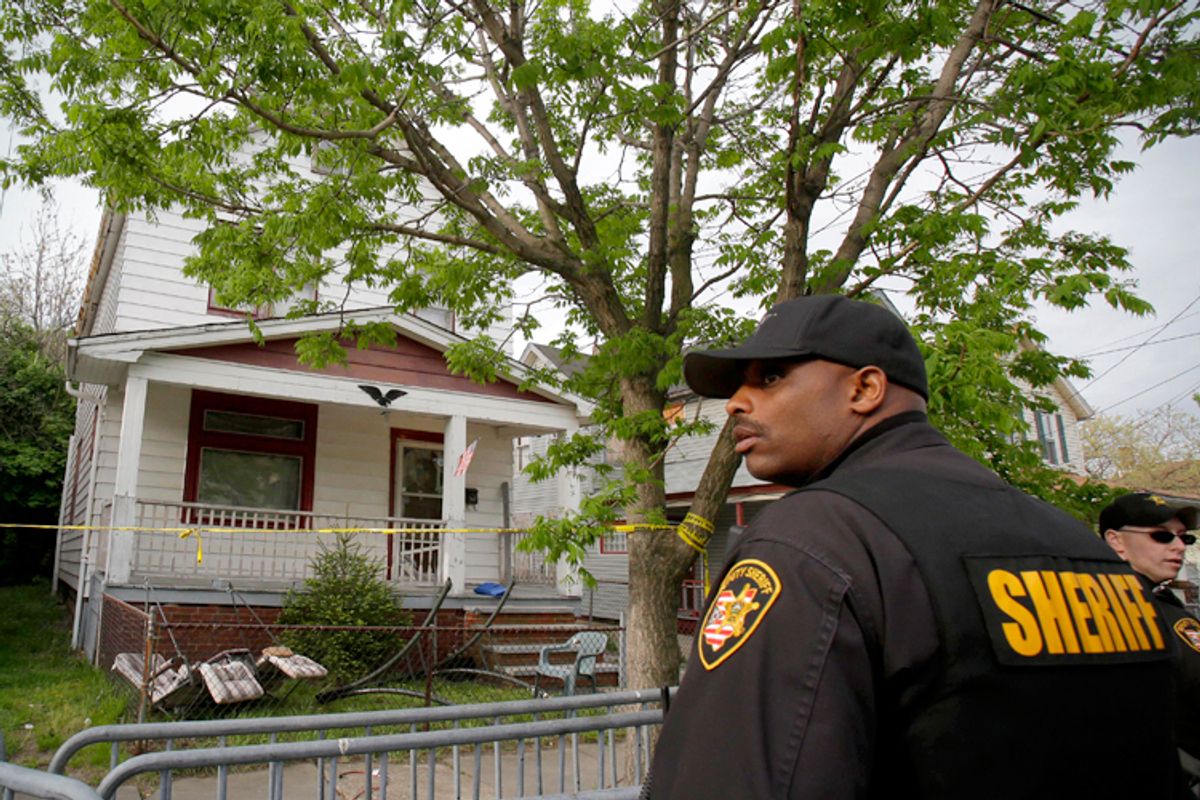 A sheriff deputy stands outside the Cleveland house where Amanda Berry, Gina DeJesus and Michelle Knight were allegedly held captive for almost a decade. (AP/Tony Dejak)
--

Whether we want to or not, we will soon learn many more horrifying things about what the three young women imprisoned and tortured in Cleveland went through. But here is something we already know: It might have been stopped earlier, but for a culture of denial. Charles Ramsey's now-famous intervention shows some success with decades of cultural messaging that violence can happen in the house next door and you should do something about it. But it took over a decade.

The Cleveland story fits every societal expectation of what sexual violence looks like: Young girls, abducted off the street, imprisoned by grim-faced perpetrators whose mug shots are straight out of a crime procedural. And even then, it was allowed to continue, hidden in plain sight.

Police deny that neighbors ever called the police to say there were naked women on leashes in the backyard. But that's what the neighbors say, possibly due to false memories: "We thought it was funny at first, and then we thought that was weird, so we called the cops," said Nina Samoylicz. "They thought we was playing, joking, they didn't believe us." (Cleveland police claim they have no record of such calls.) Israel Lugo told the paper he knew of three calls made to police about the house between 2011 and 2012. Elsie Citron told USA Today her daughter called the police after a similar sight, "But they didn't take it seriously," she said.

People who are officially tasked with keeping people safe have also been making excuses. On Tuesday, Air Force Chief of Staff Gen. Mark A. Welsh went before the Senate Armed Services Committee to answer for a 35 percent rise of sexual assaults -- only a tiny fraction of which are officially reported -- and blamed "hookup culture."

Welsh pointed out that 20 percent of women said they had been sexually assaulted before their military service had begun. "So they come in from a society where this occurs," he said. "Some of it is the hookup mentality of junior high even and high school students now, which my children can tell you about from watching their friends and being frustrated by it."

He should have stopped after "a society where this occurs." Yes, the military is not alone in its epidemic of sexual violence, though it has its own particular systemic enabling of it. What does that have to do with a "hookup mentality," unless you want to suggest that rape is caused by teenage promiscuity rather than by rapists?

Doing something other than shifting the blame would require facing up to an ugly fact. The "enemy" is the man you hired to oversee sexual assault response. The "enemy" is your neighbor with whom, per Charles Ramsey, you ate ribs and listened to salsa. And, as we learned Wednesday, the "enemy" has also been Charles Ramsey, a repeat domestic abuser, as 10-year-old records show. Maybe he's learned something since then, but even people who do heroic things can also be abusers.

As part of the training of sexual misconduct hearing panelists at Columbia University, sexual abuse specialist Rachel Efron has written that sexual trauma "has a logic and dynamics that is different from normal day to day logic. It is, by definition, for the victims an experience that does not fit into their existing conceptual schemata and thus it overwhelms them, and for us as listeners it does not fit in our conceptual framework and can overwhelm us or maybe more likely, it can escape us (a luxury of course the victims don’t have), and we may not even know it." I've experienced this as a reporter interviewing survivors of sexual violence: Even when knowing the statistics, after having read the studies, having heard the personal stories and been close to the trauma, I find my brain wanting to find a reason not to believe, because sometimes it's too much to comprehend.

To put it another way, we have to reconcile the world as we know it -- one in which sexual violence is usually invisible or partly hidden from view -- with the world as it is. That means imagining people we know can hurt each other in unimaginable ways. Empathy is crucial here, but also requires accepting the existence of, and letting in, pain that we'd rather dismiss.

Maybe it's the denial that this happens often or that it happens to the people around you -- if it hasn't happened to you -- that means people would rather make jokes about rape than admit its ubiquity. The writer Sady Doyle tried to find out when she wrote to the comedian Sam Morril, a proud maker of rape jokes, some of them racist. She pointed out that there was an apparent hierarchy of violence that he would take seriously:  "I always wonder this, about comedians who tell a lot of rape jokes. You presumably know that it happens. Do you know that it happens this often? Is it a realistic possibility, in your mind, that not just one but several of the women in your audience have experienced it?" Doyle wrote. She added, "But in your Tweet about the Boston Marathon, you write that 'this violence is infuriating.' What’s the difference between the violence perpetrated at the Boston Marathon and the violence that will affect about one-quarter of all women during their lifetimes, and account for no small number of deaths? That’s not a set-up for a joke. I just want to know. Why is only one of those infuriating?"

Here is one difference between those two kinds of violence: One took place in public, intentionally wreaking trauma as far and wide and as visibly as possible. No one could rationalize it. No one could say it was just a private matter. That, after all, was how domestic and sexual violence, usually against women, was allowed to continue for so long. First, because it was considered a matter between a man and his property. Then, because it was considered a matter of privacy among families. Conveniently, that sort of privacy allowed the wider world to pretend it didn't happen so much, or didn't matter so much. Amanda Berry wasn't the first to get help kicking open a door that had imprisoned her, and she won't be the last.