Has the Syria threat cooled?

A conference with Assad and the opposition may buy Obama some time. But here's what it really means 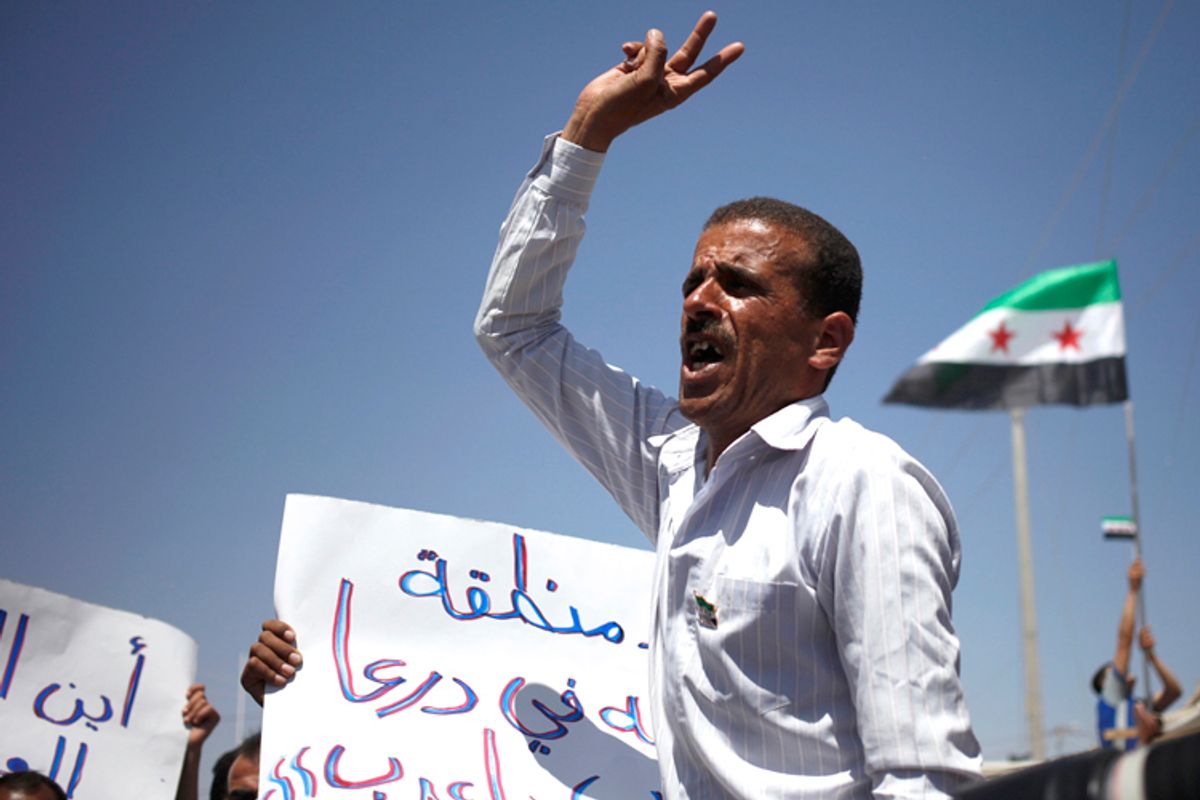 Watching Syria is like looking through a kaleidoscope. The picture seems to change dramatically in response to the slightest jolt, but the components remain the same. The past week has seen lots of jolts, but no real change in the elements that make up the sad picture.

Inside Syria, the regime’s forces have started an ethnic cleansing campaign in the west intended to clear Sunnis from areas its Alawite supporters want to secure for themselves. The regime has also successfully pushed south toward the Jordanian border. In much of the rest of the country, there is lots of fighting but only marginal changes in the confrontation lines, which run through many urban areas, or between the urban centers and the countryside. Almost 7 million Syrians are now thought to need humanitarian assistance. The number could rise dramatically during the rest of the year.

Secretary Kerry’s visit to Moscow this week revived, once again, hopes for a negotiated settlement. He and the Russians agreed to try to convene a conference, even before the end of the month, that would include both the Syrian opposition and the Assad regime. The prospect of this conference will relieve President Obama of any need for a quick decision on unilateral action in Syria, since it would hardly be appropriate to preempt the conference. That is likely what both the Russians and the Americans wanted: more time.

Pressure had been building for action, including possible direct American shipment of arms to the opposition, safe areas for displaced people, a no-fly zone, or an attack on Syria’s air force and missiles, which are being used against civilians. Evidence that the regime has used chemical weapons put President Obama on the spot, as he has several times said that crossing this red line would change his calculus. American credibility, some thought, was at stake.

The ink was barely dry on the allegation of chemical weapons use when Carla Del Ponte, a Swiss member of a U.N. human rights inquiry for Libya, suggested that she knew of evidence that chemical weapons were used by the opposition rather than the regime. This allegation has little credibility, not only because of the technical difficulties involved but also because Del Ponte has a record of sensational allegations that are difficult to prove (or disprove).

Syria’s neighbors are increasingly under strain. Turkey, Lebanon and Jordan are over-burdened with refugees, now more than 1.4 million strong and likely to double within the year. In Iraq, the Syrian fighting is exacerbating sectarian tensions between the government in Baghdad and Sunni protesters. Prime Minister Maliki is worried that a successful revolution in Sunni-majority Syria will export insurgency to his Shia-majority Iraq. At least some of the protesters will not be unhappy if he is correct.

Israel struck by air inside Syria twice last weekend, ostensibly to block missiles from trans-shipment to Lebanon’s Hezbollah from Iran. This has cast doubt on the efficacy of Syria’s air defenses, which has been a consideration inhibiting American military action in support of the opposition. Hezbollah is saying Syria will arm it with “game-changing” weapons. If so, we can expect more Israeli attacks to prevent their transfer. At the same time, Israel is at pains to make it clear it is not intervening in the Syrian civil war. It is also strengthening its border defenses against a buildup of radical opposition Islamists in the Golan Heights.

Syria is also causing serious political tensions elsewhere in the Middle East. Turkey and Qatar are supporting Muslim Brotherhood-affiliates inside Syria. Saudi Arabia and the United Arab Emirates dislike the Brotherhood and claim to be supporting secularists, which is what the United States prefers. The Syrian opposition remains fragmented. The Brotherhood-affiliated prime minister has not yet named his government, presumably a vital step before a conference can be held.

None of these developments suggest much hope for a negotiated settlement at an upcoming peace conference. Conferences of this sort went on for years during the Bosnian war, without result until the Americans twisted arms at Dayton. It is not clear whether the Americans and Russians are prepared to twist opposition and regime arms with the vigor required to get a settlement. But Secretary Kerry’s backpedaling from insistence that Bashar al Assad leave office at the start of a transition opens up an area of possible agreement with Moscow that has not been in evidence previously.

It would be foolish, however, to suggest that a negotiated settlement is just around the next corner. We are still at the beginning of Syria’s strife. It would be much safer to assume things will get even worse before they get better. There will be more unexpected jolts and changes in the kaleidoscopic pattern before this is over.

Daniel Serwer is a professor at the Johns Hopkins School of Advanced International Studies and a scholar at the Middle East Institute.  He blogs at www.peacefare.net and can be followed on Twitter at @DanielSerwer.