Kickstarter: Stop blaming us for Zach Braff and "Veronica Mars" 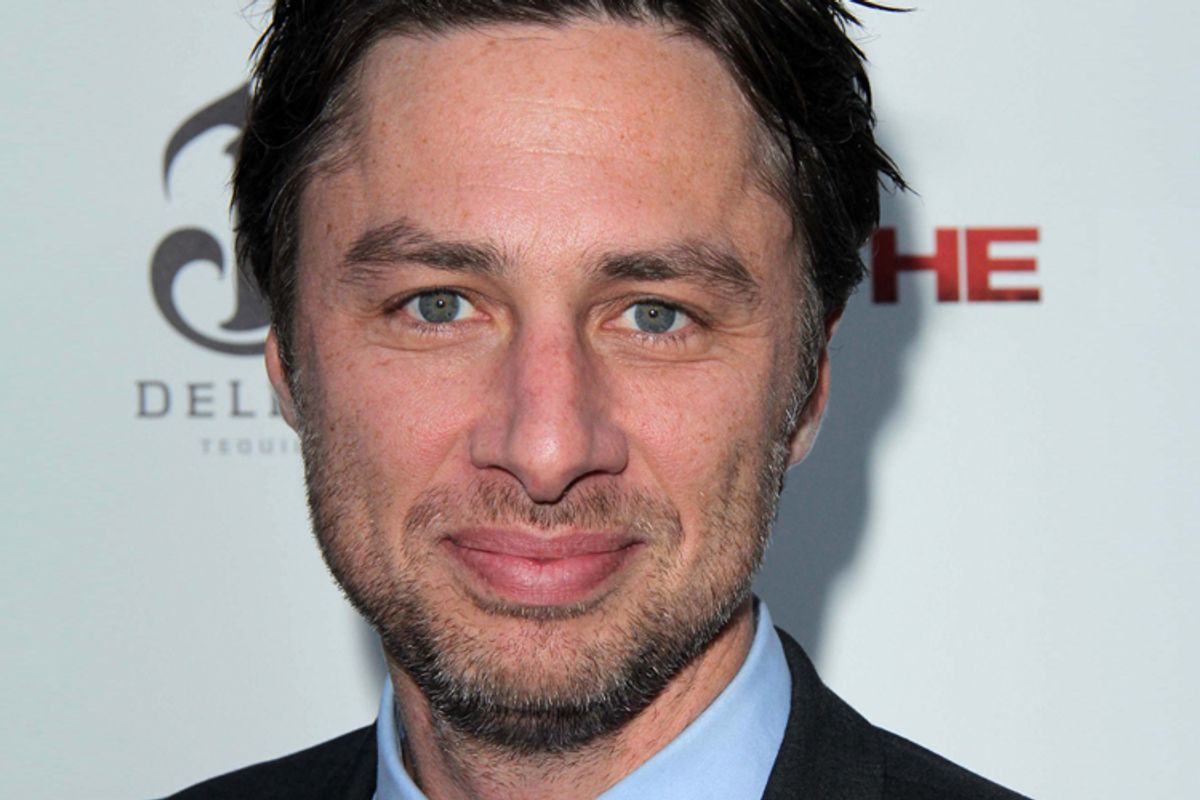 Now that everyone else on the Internet has weighed in on who is and isn’t allowed to crowdfund creative projects, Kickstarter has published its own statement. The short version: Stop whining about the "Veronica Mars" movie and Zach Braff’s “tonal sequel” to “Garden State.” A rising Kickstarter tide lifts all boats, so says their math:

“The Veronica Mars and Zach Braff projects have brought tens of thousands of new people to Kickstarter. 63% of those people had never backed a project before. Thousands of them have since gone on to back other projects, with more than $400,000 pledged to 2,200 projects so far. Nearly 40% of that has gone to other film projects.”

Kickstarter also reiterates its famously loose mission, which is to “help bring creative projects to life.” A customizable e-paper watch raised $10 million last year. Its goal? $100,000. Zach Braff should be so lucky. Kickstarter’s wide net includes bike lights, food trucks, board games, the Coney Island Mermaid Parade, all 729 (!) current zombie projects and, to his chagrin, projects to which Ken Levine won’t give a dime.

Levine says backing projects like Braff’s film “Wish I Was Here” (oh, but isn’t Braff kind of asking for it with that creative thesis title?) “defeats the whole purpose of Kickstarter”:

“The idea — and it’s a great one — is that Kickstarter allows filmmakers who otherwise would have NO access to Hollywood and NO access to serious investors to scrounge up enough money to make their movies. Zach Braff has contacts. Zach Braff has a name. Zach Braff has a track record. Zach Braff has residuals. He can get in a room with money people. He is represented by a major talent agency. But the poor schmoe in Mobile, Alabama or Walla Walla, Washington has none of these advantages.”

OK, all of what he says about Braff is true, and he’s not even making a value judgment on whether or not Braff is a twee hack who fooled us once with a good soundtrack to a mediocre movie (Natalie Portman in a helmet!). And he makes a sound (if obvious) point on Kickstarter being an amazing resource for cash-strapped innovators who might otherwise not have access to more than their own savings accounts.

But not only does Kickstarter itself disagree with Levine on what its “whole purpose” is, Levine gets it wrong when he says “someone who otherwise might have funded the Mobile (Alabama) kid instead will toss his coins to Zach Braff because he figures it’s a better bet and he gets to rub shoulders with show business.”

That’s thinking like a production company, not like a fan who doesn’t mind buying into a glorified fan club to show her support for an artist she likes (Haters note: Braff’s project has garnered more than 36,000 backers at the halfway mark, so someone out there loves him). Kickstarter isn’t a zero-sum game, even for backers from Mobile or Walla Walla who might only have a few coins to toss into the hat. Blockbuster projects haven’t shut out the little guys. Won’t someone think of the Mobile schmoes?

I recently completed a small, successful campaign for my nonprofit workplace, and true, it is a damn humbling experience to watch the "Veronica Mars" movie rake in $2 million in as many days while your own project takes its sweet time making its quite modest goal. It can feel unfair in the moment — does Warner Bros. really need your $10? — but in the end, both of our projects met their goals, so what was harmed here? Our naive belief that populist crowdfunding wouldn’t be hijacked by Hollywood?

As tempting as it can be to lash out at easy targets like Braff (so earnest! so syndicated!), when Kickstarter turns into yet another dick-measuring contest, everyone loses. Who would ever try to raise money to publish an essay collection on Morbid Anatomy (extreme taxidermy, death-themed 19th century Parisian cabaret) if they considered themselves in competition with Kristen Bell? It’s easy to get cynical when celebrities “go begging,” but if fame trumps quality and/or heart, why is Melissa Joan Hart’s project struggling?

Most Kickstarter projects aren’t seeking additional funds for a director who is also, by his own admission, kicking in “an ass-ton” of his own money and hustling foreign sales to make up a $6 million budget. Kickstarter is full with modest projects like this guy’s, a Walla Walla schmoe who just wanted to raise $500 to “make the dream of my design on a T-shirt a reality.” It’s really this simple: if you want to keep Kickstarter viable for the little guys, back their projects.