Has Mother's Day outlived its purpose? 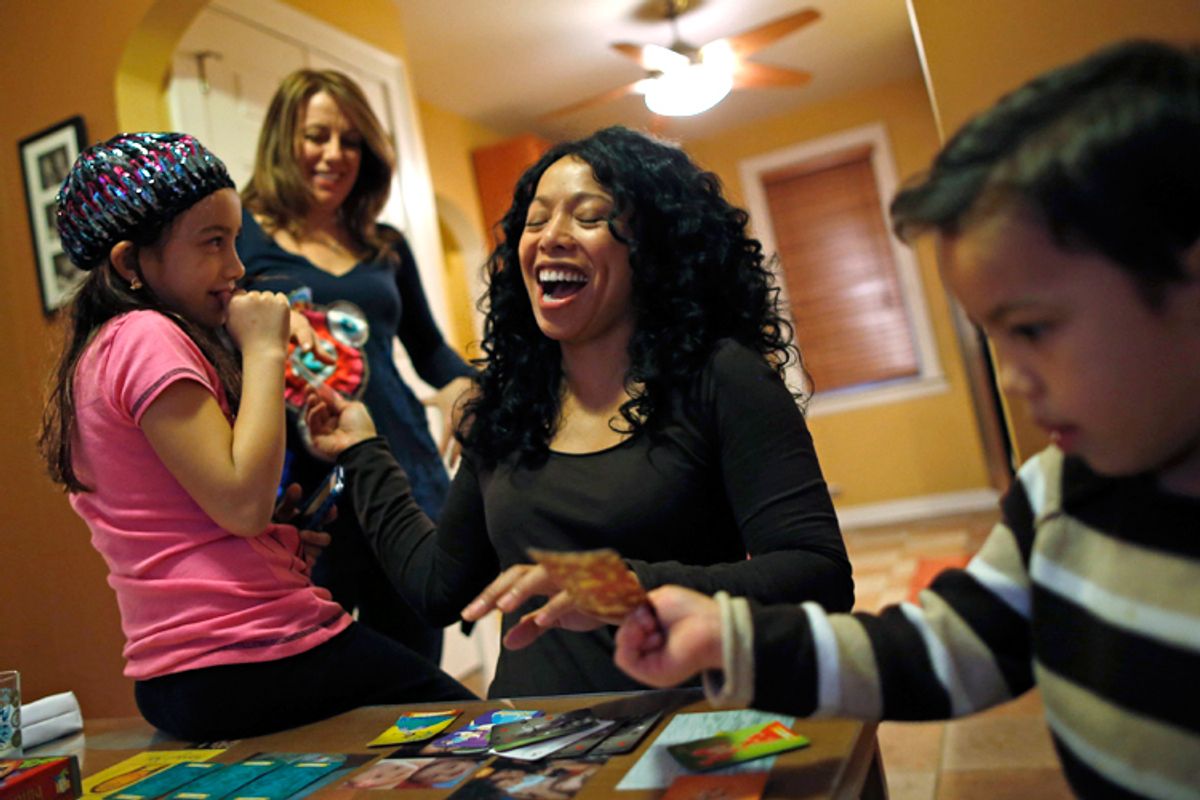 Mercedes Santos and her partner Theresa Volpe, with their children at their home in Chicago, December 22, 2012. (Reuters/Jim Young)
--

As my four-year-old is busy arguing with me about why she should be able to color on her breakfast cereal and I’m busy trying not to kill her, it can be hard to remember that Mother’s Day began as a call for world peace.

And at the same time, as the world around us seems to change more often than my daughter changes outfits, it can be hard to not lump Mother’s Day with some nostalgic, soft-focus-sense of June Cleaver as the idealized mother image toward which we all strive.

Somewhere between the good and bad of modern society lies the real Mother’s Day — in which we must simultaneously celebrate the wonderful diversity of families in the 21st century while condemning the real violence and harm done to so many of those families every day.

Today in America, four out of five families fall outside the traditional notion of a mom at home and a dad at work and a bunch of kids in the yard with the picket fence. And while some certainly see this as a cause for concern, arguably a similar majority does not. Just as our idea of America — of race and citizenship and belonging — have expanded, albeit with great struggle, over the centuries to include new communities and identities, our idea of family is always expanding. Whether it’s grandparents raising their grandchildren or single mothers adopting children on their own or families like mine with two parents of the same-sex or families blended by second (or third or fourth) marriages, our ideas and even our ideals about what makes a “family” have stretched to accommodate reality. Today, a majority of Americans support same-sex marriage — just one sign of how our collective definition of family is evolving, for the better.

And so this year, I’m not schlepping to the Hallmark store to buy some cookie-cutter card about a cookie-cutter mom to send to my own mother, let alone get my kid to sign for my partner. It’s 2013, y’all!  I’m sending my Mother’s Day cards online — and with a modern message. The Strong Families campaign, created to recognize the diversity of modern American families and fight for all of our basic rights and dignity, has a stunning set of what they’re calling “Mama’s Day” e-cards that are multi-generational, multi-racial, diverse in gender and as political as the origins of the holiday itself. My favorite shows a young woman of color with a baby on her back and her fist in the air fighting for social justice.

But it’s hard to choose from the stunning works of art, many created by noteworthy artists, that simultaneously show the diversity of families in our society while lifting up the unanimity of love and caring as a common thread between all families. There’s even one of two cuddling cats.

Behind the common thread of love is also a common thread of warning — that families that are equally loving are not treated equally under the law.  Currently, Strong Families is highlighting the inequities within the immigration system — and how under proposed reform legislation, some families would still be treated unjustly. The origins of Mother’s Day, in which Julia Ward Howe impressed that mothers everywhere should act as though children facing war and violence are their own, should still ring in our hearts today. Mothers (and fathers and grandparents and brothers and sisters) who have come to America seeking the same opportunities for their children that I want for my own, that are driven by the same love, should not be arbitrarily treated like criminals because we seem to care more about breaking immigration laws in our country than financial fraud laws (just to pick an example). Currently, at least 5,000 children are in foster care in the United States today because their parents or guardians were deported. What kind of family policy is that? And what kind of mother am I if I tuck my daughter in at night but don’t take action to help every other child in America be safe at home with their own family?

Whether it’s paid sick-day legislation or Medicaid expansion or ending high stakes testing or raising the minimum wage, Mother’s Day has its origins not just in focusing on our own little family but spreading our care and compassion to every family around the globe. And while that might sound a bit schmaltzy, I guarantee it’s less so than most of those stupid Hallmark cards. Happy Mama’s Day, y’all!