Why are men still proposing? 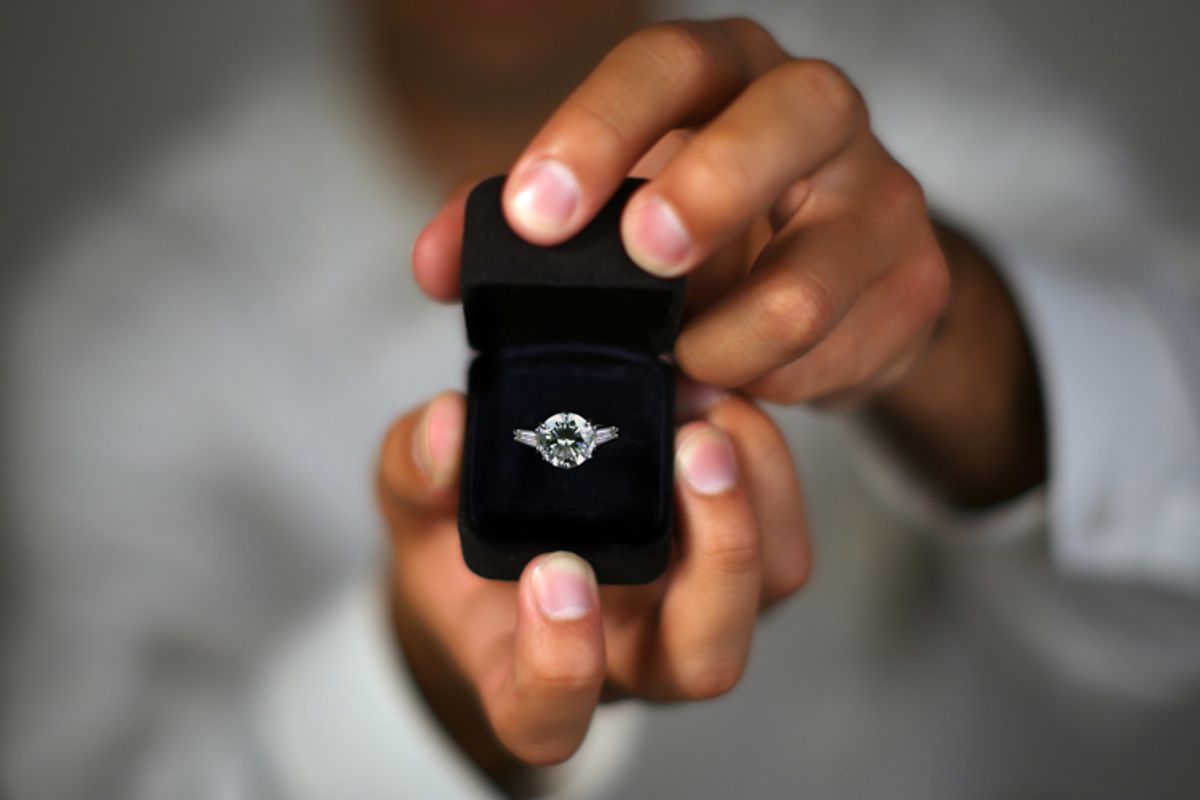 We didn't have much of an audience. There was a couple just out of earshot reverently staring at the horizon, and a lone crow hovering in place a couple of feet in front of us, its glossy black body effortlessly buoyed by the lift of the ocean wind. "Hey, you," I told the bird, nonchalantly. "We just got engaged."

Christopher and I had hiked four miles through the mossy Point Reyes forest to a dramatic cliff overlooking the ocean. We sat in the dirt, which was pockmarked with mouse holes and accented with ice plant in electric-pink bloom. Turquoise waves churned below and a seagull took stomach-turning dives as we read each other letters we had written moments before alongside a shady creek. These notes -- our individual expressions of why we wanted to make this commitment -- said the same things with different words. We cried, hugged and then took turns asking, "Will you marry me?" We both said yes and, hands shaking, slipped engagement rings on each other's fingers.

This was two weeks ago. He didn't get down on one knee. There was no ring in a champagne glass. The moment wasn't preserved for posterity -- or any future BuzzFeed lists of best viral proposal videos. This non-traditional approach -- the best term I have for it is "a mutual proposal" -- arose out of countless conversations about how to participate in this wildly problematic institution without compromising our values, or brains. We knew we were going to do it before we knew how.

When we returned home to the real world with our news, we were time and again asked to tell the story. Universally, people praised our decision to do things nontraditionally -- we do live in the liberal Bay Area, after all. One married couple told us about the awkwardness of their traditional proposal -- how she  knew something was up and he was crazed with anxiety -- in the days leading up to it. One husband told us, "If I had it to do over again, I'd probably do it differently."  The jeweler whom we bought our rings from told us that he was designing a custom engagement ring for his girlfriend and was nervous about whether she would like it, and what her answer would be. "I wish we were doing it like you guys," he told us, as we bought the rings together. "That's so much better."

I had to wonder whether these nontraditional sentiments suggested that change was afoot. After all, we've seen the definition of marriage, not to mention gender roles, change dramatically. There's been an explosion of DIY brides and growing cynicism about the wedding industry. It would seem only fitting -- especially given growing numbers of same-sex couples getting hitched -- for the proposal to change too.

The truth, though, is that the male proposal is showing no signs of disappearing. Last year, a survey -- of students at notoriously liberal University of California, Santa Cruz, no less -- found that the vast majority of heterosexual respondents said that they would “definitely” want the man to do the proposing in their relationship. Not a single student, male or female, expressed a clear-cut interest in the woman proposing. Some weirdos like myself may toy with engagement tradition -- be it through female-led proposals or non-proposal proposals -- but most of us still expect to see a man on bended knee.

Stephanie Coontz, author of "Marriage, a History: How Love Conquered Marriage," tells me that it’s unsurprising that this particular tradition has remained despite radical changes in the meaning and definition of marriage. “It's the symbolic areas that seem to be the most resistant to change,” she said. "One of the reasons it's so slow to change is that we have so many of these old takes about women talking about their feelings perhaps more than they should” and men not talking about their feelings enough, she explained. “As we've gotten to have much higher expectations of real communication and back and forth and intimacy and fairness, that's an anxiety that both partners bring to it."

The male-led proposal “becomes a flashpoint,” she says. “It's the place where the man gets to express strong emotions and the woman gets to hear them." Coontz sees the male proposal as “that last bit of reassurance that this will be even," the man essentially saying, “I'm gonna bend the stick in the opposite direction just for a minute.” The proposal -- just like on Valentine’s Day -- is a culturally sanctioned time for a man to show his tenderness. He may not be Mr. Perfect always -- but in that moment, at least, he is very much expected to be. (Frankly, I preferred finding a man who was tender year round.)

Much as typical proposals appear to be driven by the man, research has found that women tend to at least do some backseat driving. There are hints about timing -- and the occasional ultimatum -- the type of diamond ring desired and ideal proposal setting. A study in 2010 titled “Waiting to Be Asked: Gender, Power, and Relationship Progression Among Cohabiting Couples,” found that women often “hinted or joked [with their partner] about getting engaged.” (I can anecdotally report that I have a female friend who has jokingly texted her live-in boyfriend an emoji diamond ring.) The study also reported, “Stories of the woman’s desires to expedite a proposal were also mentioned by the men.” In other words, it isn’t as though there is necessarily one sole actor, even in cases where the man proposes to the woman.

The study presents an even more complicated power dynamic than that, though: Many of the women who admitted to hinting at marriage also felt disempowered to making that dream a reality. As one woman in the study said of her live-in boyfriend, “I usually have to force him into talking about it.” Researchers also reported, “The men in our sample appeared far more confident in their partners’ desires to marry them than the women did with respect to their mates. In fact, men often asserted that their partners were anxious to get engaged.” The men in the study said things like, “Oh, she’s waiting for, itching for that.” The researchers speculated that “the consistency of such statements reflects men’s conviction that they control the pace of the relationship progression” -- and it is no surprise then that they most often control the proposal itself.

Coontz suggests that the proposal might also be a ceremonial end to the pressure a man experiences to be the romantic initiator -- whether it’s asking a woman to dance or for her phone number. “There's a certain sense in which both males and females unconsciously are saying, 'Go ahead and do this one more time, but you're doing it in a safe environment because you know I'll say 'yes,’” she says.

She is generally comfortable looking at the male proposal simply as a “game we play." (Personally, I've come to respect people's proposal choices like sexual fantasy: There is no right desire.) Still, Coontz says she does believe that “it would be better to get past it, to get to the point where we stop feeling like [women] are the ones who receive invitations and [men] are the ones who have to start them." The downside to breaking tradition, as I found, is that there is no guidebook. We had to clumsily find our way through the mutual proposal: Do you ask first or do I? Do we do it at the same time? The upside: It feels entirely your own.

"We are engaged now," Christopher told me afterward. "Weird," I said. And then we walked the four miles back to the car, laughing as we invented our own left-handed engagement ring fist-bump on the way.