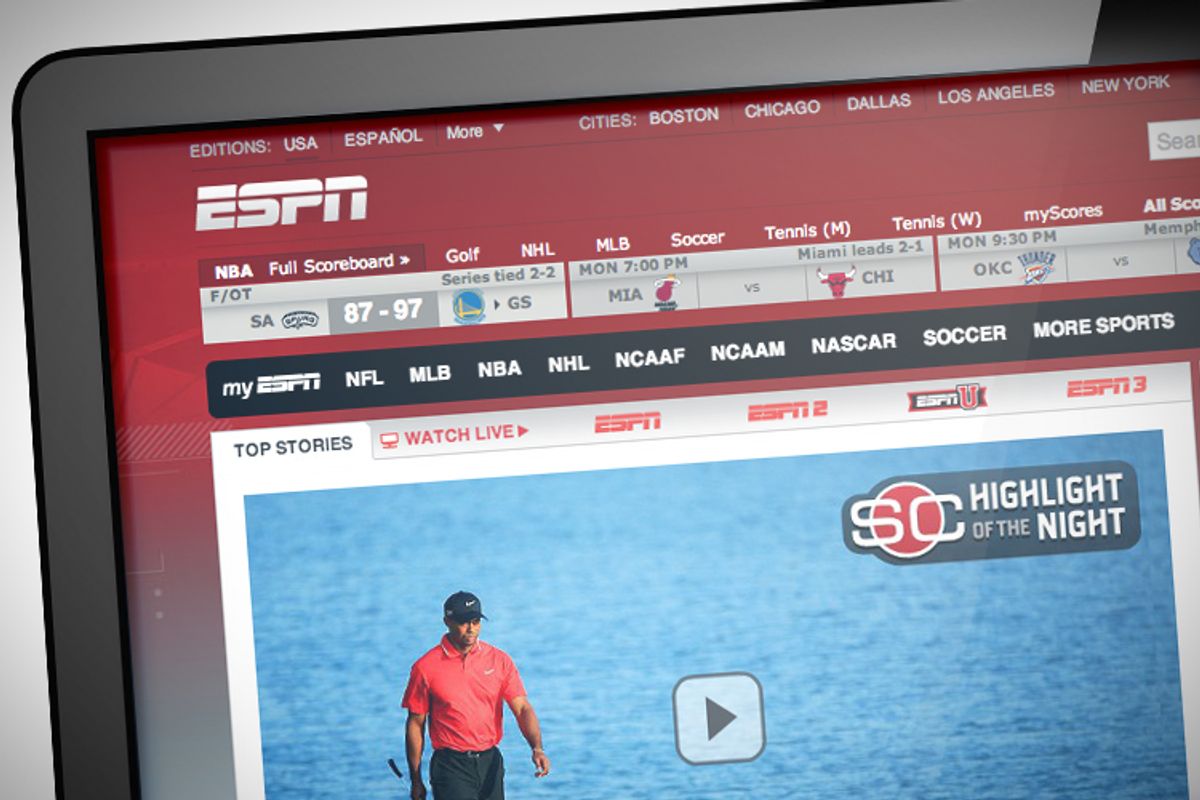 If you are someone who likes to watch live sports events on your mobile phone, then it is probably welcome news that ESPN may be in negotiations with a big telecom company to exempt its streaming video services from  caps that limit how much data mobile users can download. Watching the NBA playoffs on your iPhone, without any free Wi-Fi to rely on, is an excellent way to chew speedily through your allotted bandwidth for the month. ESPN, reports the Wall Street Journal, wants to ensure that viewers get to eat as much cake as they want (and, of course, therefore be exposed to as many ESPN-delivered advertisements as possible).

But if you're not an ESPN addict, you might do well to look askance at the news. That's the take of Public Knowledge, a consumer-interest Washington-based public advocacy organization that quickly decried the possible ESPN deal as an obvious violation of the principle of "net neutrality."

What is net neutrality? Public Knowledge defines it as "at its core ... making sure that the company that connects you to the Internet does not get to control what you do on the internet ... Imposing data caps on consumers and then allowing wealthy content holders to buy their way around them is a recipe for stagnation online."

Public Knowledge's post prompted an immediate backlash from telecom shills and frothing right-wing defenders against socialist encroachment. Daily Caller rolled out Scott Cleland, the chairman of NetCompetition, a lobbying group funded by cable and phone companies, to argue that the proposed ESPN deal was a classic example of how competition benefits consumers.

Apparently, some Washington-elites -- who seek to impose a public one-size-fits-all Internet on everyone under the banner of “net neutrality” and “Internet openness” -- are deeply threatened by the prospect of consumers getting more content delivery choices.

At RedState, the wonderfully monickered Seton Motley put down his monocle and blustered about the "ridiculous folly of the Left." Public Knowledge isn't a consumer interest group, he raged, it's a "government interest group" whose sole goal is "growing government."

Both Scott Cleland and RedState, intriguingly, brought up the same useful analogy to explain why Public Knowledge was off-base. When ESPN pays a company like AT&T to lift data caps for its streaming video, it's just like any other company paying the phone company subsidized access to  an 800 toll-free number.

There's a good reason why the 800 analogy appears in both anti-Public Knowledge diatribes. Because it was originally suggested by AT&T itself back in February.

"A feature that we're hoping to have out sometime next year is the equivalent of 800 numbers that would say, if you take this app, this app will come without any network usage," [AT&T executive John] Donovan said on the sidelines of a mobile-industry conference here. It's far from clear how willing technology companies would be to pay wireless carriers for data use. Mr. Donovan said there was interest from companies who could use the feature to drum up new business from customers wary of using data-heavy services like mobile video.

It surely comes as no surprise that a telecom lobbyist and RedState are simply repeating AT&T's propaganda. But what's really going on here requires no analogies or similes to understand. Simply put, if you have the cash to pay off the telecom carriers, you can get your data exempted from the caps. If you don't have the cash, you're out of luck. And that's exactly what proponents of net neutrality are worried about: a future in which the wealthy have better access to the Internet than others. The defenders of "competition" and a "free market" have it all wrong. The pay-for-unlimited-bandwidth option actually restricts competition. That up-and-coming app developer with the cool new video streaming product who can't afford to pay off AT&T or Comcast or Verizon ends up losing out. Entities with access to capital get a preferred position on our phones.

That's not the "free market." That's the "bought-and-paid-for market."

UPDATE: Mike Wendy of MediaFreedom.org points out that Public Knowledge has previously received financial contributions from Google, a strong supporter of net neutrality.