With zero self-awareness, Beltway conservatives and journalists are salivating over a return to Clinton scandals 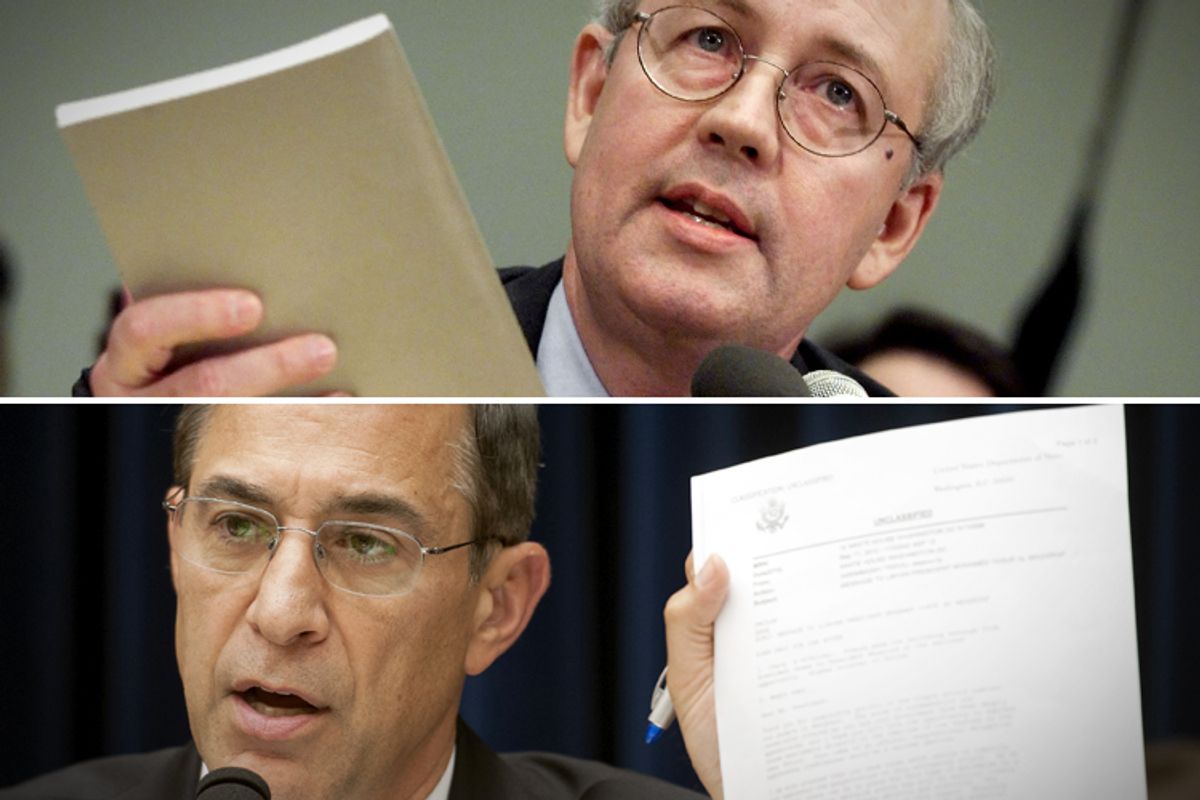 First things first: Secretary of State Hillary Clinton never said “Who cares?” about how four Americans died in Benghazi. Sen. John McCain either misspoke or flat-out lied about that on ABC’s “This Week” on Sunday.

“Remember when she said, ‘well who cares how this happened,’ in a rather emotional way?” McCain asked guest host Martha Raddatz. “A lot of people care.” It’s too bad Raddatz didn’t tell the senator that no, she didn’t remember that – because Clinton never said it.

Remarkably, I’ve seen no one follow up on McCain’s misstatement today either. (I’m sure someone will correct me if I’m wrong.) Instead, reporters are breathlessly parsing each new GOP charge on Benghazi (while also decrying the very real abuse of the IRS overscrutinizing the tax-exempt status of conservative groups.) The National Journal’s Ron Fournier tweeted “Welcome to the 90s,” with no apparent irony or self-awareness about the role of the media in ginning up that decade of phony scandals that paralyzed our last popular second-term Democratic president, Bill Clinton.

In fact, Fournier contends Benghazi will hurt Clinton and President Obama, even though he acknowledges the GOP’s claims are overblown. “If nothing else, Benghazi is a blow to the credibility of the president and his potential successor, then-Secretary of State Hillary Rodham Clinton. This could be big … Credibility is Clinton’s vulnerability, dating to the unjustified financial accusations that triggered the Whitewater investigation. Doubts persisted about her veracity and authenticity throughout the 2008 presidential campaign.”

Read that again: “Credibility is Clinton’s vulnerability, dating to the unjustified financial accusations that triggered the Whitewater investigation.” The accusations were unjustified, Fournier admits, but they hurt Clinton anyway. Why? Because reporters continued to act like they were justified, even in the face of contrary evidence.

And so it goes with Benghazi. Welcome to the '90s!

Let’s remember what Clinton actually said in her Jan. 23 congressional testimony. She faced down Wisconsin Sen. Ron Johnson, who repeatedly insisted the administration immediately knew the attack on the Benghazi consulate was terrorism. After correcting Johnson several times, Clinton erupted:

With all due respect, the fact is we had four dead Americans. Was it because of a protest or was it because of guys out for a walk one night who decided that they’d go kill some Americans? What difference at this point does it make? It is our job to figure out what happened and do everything we can to prevent it from ever happening again.

Still, the former secretary of state probably wishes she could take those eight words back. The motivation of the forces that attacked the Benghazi consulate is making a difference, politically at least, and it may also make a difference in terms of our understanding how bad the Libya situation was, and is.

But we can’t get to that latter, serious question, because of all the ridiculous GOP posturing on Benghazi – posturing abetted by breathless Beltway reporting. Also on Sunday, McCain charged the administration with a “coverup,” to which Sen. Dianne Feinstein shot back: “I think that’s nonsense.” Former Defense Secretary Robert Gates accused the administration’s critics of having a “cartoonish” approach to how the military might have rescued the Benghazi victims.

There are two sets of issues here: what actually happened, and what the administration said about what happened. Unbelievably, most attention continues to swirl around the infamous “talking points” prepared for Congress members as well as U.N. Ambassador Susan Rice to talk about the attack on the Sunday shows Sept. 17. ABC News’ “scoop” showing that the talking points had been substantively edited 12 times reinvigorated the Benghazi story, because it provided evidence that State Department spokewoman Victoria Nuland succeeded in getting many details redacted from the document – using language that, to be honest, seems deliberately designed to inflame charges of a coverup.

References to previous violence in Benghazi, for instance, “could be abused by members [of Congress] to beat up the State Department for not paying attention to warnings, so why would we want to feed that either?” Nuland wrote. “Concerned …” Still unhappy with a later draft, Nuland complained: “These changes don’t resolve all of my issues or those of my buildings leadership,” Nuland wrote.

Her building’s leadership, of course, was Secretary of State Clinton.

Conspiracy-minded liberals may be tempted to blame the whole mess on Nuland, since she worked for Dick Cheney and is married to neocon Iraq War booster Robert Kagan. Alex Seitz-Wald has a good piece about her here. In fact, the career Foreign Service officer has worked for both parties, and her talking points push-back was not about protecting her boss, but her agency. All Nuland’s email proves is that there was dysfunctional interagency warring going on between State and the CIA.

Meanwhile, former CIA chief David Petraeus is being lionized by Fox News for ABC’s report that he wanted to scrap the talking points entirely. But as Media Matters reminds us, that was only because Petraeus thought they didn’t do enough to tie the attacks to Egyptian rioting over an anti-Islam video, which has been debunked as the primary cause of the Benghazi attack.

Bill O’Reilly beclowned himself by praising Petraeus for protesting the talking points, while ignoring the fact that Petraeus was peddling the very excuse for the attacks – rioting over the anti-Islam video – that got Susan Rice excoriated. So far Jonathan Karl hasn’t explained the reasoning behind Petraeus’ objections, either, so the CIA director stands as the hero in the talking points debacle.

Which is ridiculous, because if we ever learn the full truth about what happened in Benghazi, we will probably find most culpability belongs with the CIA. Nobody wants to talk about the size or scope of its operation there. Nobody wants to talk about the CIA’s role in working with local militias that were supposed to provide security for the consulate, and failed. The review by Ambassador Thomas Pickering and former chairman of the Joint Chiefs of Staff Mike Mullen made 29 recommendations, most of which focused on inadequate protection of the consulate, many directed at State. There is certainly blame to be taken by the State Department, and Clinton has taken it repeatedly.

Likewise, charges by State Department “whistle-blowers” that more could have been done to rescue those who died in Benghazi have been debunked by Mullen and Pickering’s review. “Mullen made it very clear that his view as a former chairman of the Joint Chiefs of Staff that there were nothing within range that could have made a difference,” Pickering told the AP. Robert Gates agreed. The State Department employees who came forward may sincerely believe that more could and should have been done to save their colleagues, but no one has uncovered such evidence.

Significantly, where President Obama reacted with appropriate outrage to the IRS scandal in Monday’s press conference, once again he dismissed the Benghazi story as politics. “The whole issue of talking points frankly throughout this process has been a sideshow. There’s no there there,” Obama said. And a poll by PPP found that roughly half of all voters – 49 percent – say they trust Clinton’s version of Benghazi events more than they trust congressional Republicans (39 percent trust the GOP). Just like in the '90s, the American people may see through the GOP’s effort to undermine Clinton and Obama. But just like in the '90s, they’re not getting enough help sorting fact from fiction from Beltway reporters who can’t resist a good scandal, even if it’s fake.