Meet the woman at the center of the Benghazi controversy 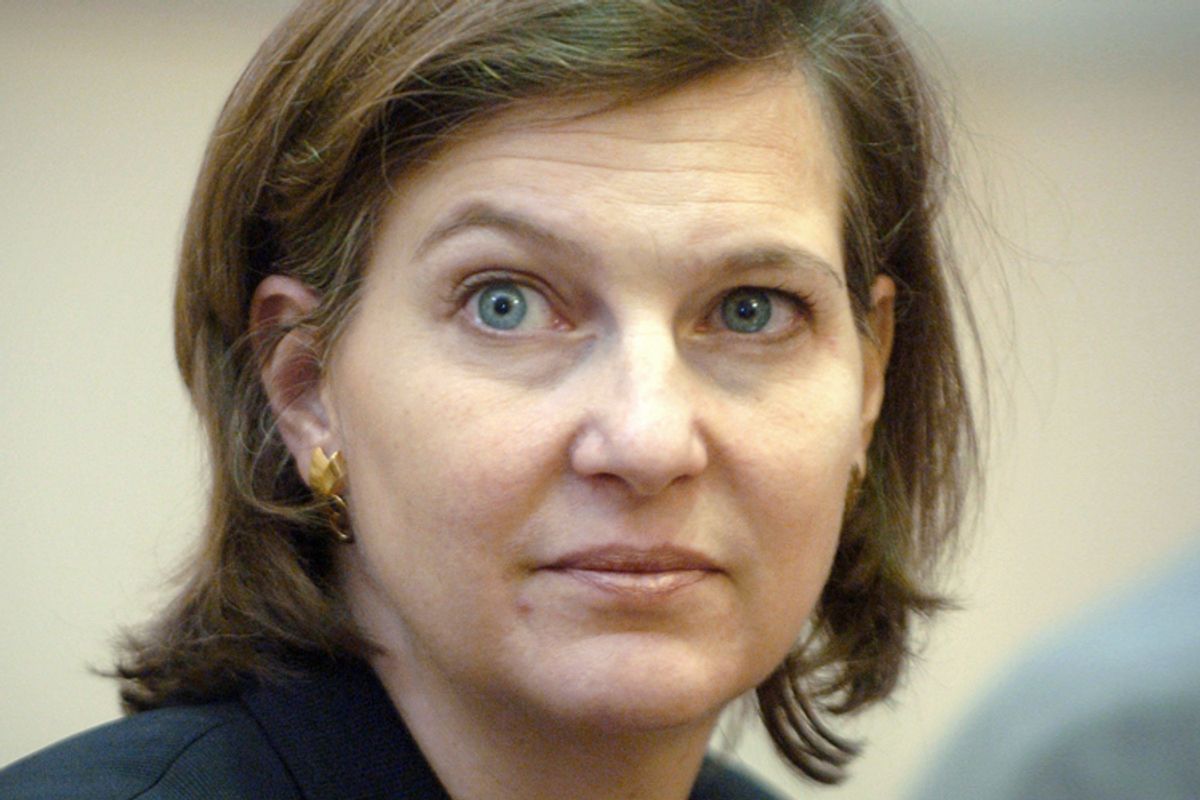 After ABC News released emails detailing the evolution of the Obama administration's talking points on the Benghazi terror attack, much of the right's ire has focused on Victoria Nuland, the State Department spokesperson who asked for the removal of references to al-Qaida and the CIA's warnings about the dangers to U.S. diplomats in Libya.

With her name splashed all over the emails and her very public role in Hillary Clinton's State Department, Nuland serves the useful dual role of scapegoat and proxy for the potential 2016 presidential candidate, who may be the real target of conservative uproar over Benghazi. Naturally, critics ascribe political motives to Nuland's actions in the Benghazi aftermath. "It’s very clear today that lib Victoria Nuland was not honest with reporters," conservative blogger Jim Hoft wrote.

But Nuland may prove to be a poor choice of left-wing villain for the right considering that her record suggests she's anything but a Saul Alinskyite. In fact, she came under attack from the left when Clinton chose her as spokesperson because she had previously served as a senior adviser to Dick Cheney. Yes, that Dick Cheney, leading antiwar blogger Marcy Wheeler to call her a "former Cheney hack."

Meanwhile, Nuland is married to Washington Post columnist and neoconservative historian Robert Kagan, who helped sell the case for the Iraq War, advised both Mitt Romney and John McCain's presidential campaigns, and co-founded the Project for a New American Century think tank with Weekly Standard editor Bill Kristol. Obama has spoken fondly of some of Kagan's work as well, but his credentials in the conservative foreign policy establishment are unimpeachable.

This is not to say that Nuland is some kind of neoconservative plant as some liberals have claimed. Nuland has a distinguished career in the Foreign Service going back almost 30 years, holding senior positions under presidents of both parties. If she has any political views, she's kept them to herself, refraining from making any donations to political campaigns or speaking publicly about domestic elections.

In an interview with the Brown Alumni Magazine, Nuland compared the Foreign Service to the military, suggesting she views the role apolitically. And while she praised Clinton, she said she expected to leave the job after John Kerry took over. “Like all good foreign service officers,” she said, “I go back in the pool, and see what they might want me to do.”

Nuland may, however, be a closet hipster, with an affinity for Fleet Foxes and Bon Iver.