"Hairspray" star is struggling to find work, living with her parents -- and willing to get naked for the right role 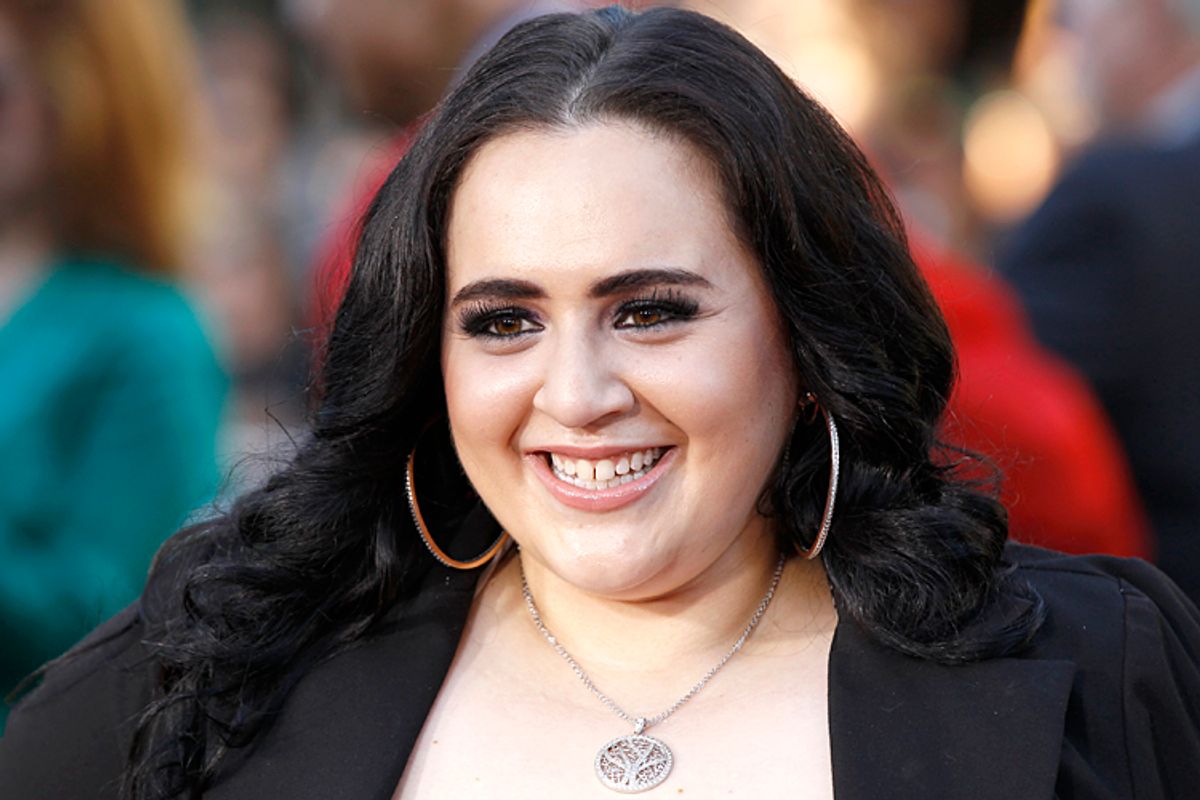 Plenty of 24-year-olds live at home with their parents.

Not all of them are actresses with a box office smash, a TV series and a Golden Globe nomination under their belts.

Nikki Blonsky, the star of the 2007 musical "Hairspray," saw her star-making role lead quickly into a fallow period; after her ABC Family series "Huge" was canceled after a single season, Blonsky has worked rarely. "I was out of work for a while," she told Salon, ruefully chuckling. "I was kind of sad." Indeed, when we asked Blonsky to comment on rumors that she had been working as a cosmetologist and shoe saleswoman, her publicist cut us off and indicated that Blonsky shouldn't answer.

But a reason for her protracted unemployment lies in the very nature of her rise to fame; Blonsky was plucked from obscurity to star in "Hairspray" and play Tracy Turnblad, a heavyset teen in segregated Baltimore. (The 2007 film was the second onscreen take on the material; the original version starred Ricki Lake.) It's difficult for plus-size actresses to have long careers; while Melissa McCarthy, older than Blonsky, has been able to make herself the butt of the joke, there simply aren't very many roles for actresses heavier than size 4.

Blonsky is getting back into work, with roles in the independent high school-set films "The English Teacher" (out May 17) and "Geography Club" (which was released last month) and on the TV series "Smash." It's a flush period for the actress, whose parents have veto power over the roles for which she auditions (though Blonsky brought up, on more than one occasion, the idea that she might shoot a nude scene). We spoke to Blonsky about her rise to fame and the period after "Hairspray" and about the challenges facing a plus-size would-be star.

You're releasing a bunch of projects all at once this year.

The saying my grandmother always said was, "When it rains, it pours." I was out of work for a while, I was kind of sad. Us actresses, we like to keep working.

I'd been playing teenagers for so long because I'm so short. People are like, you have such a young-looking face. That'll help when I'm 50, but it won't help me get a job now! But actually it did. I'm a teenager in "The English Teacher" and in "Geography Club." And "Smash" is by the same producers as "Hairspray." They wanted to bring me out and shine me in the light of someone in the business world.

How did it affect your expectations that your first project was a huge studio film?

I'm gonna be 100 percent honest with you in this interview. I was so thrilled and excited to get the role of Tracy Turnblad. She was my dream role. I went to the Neil Simon Theatre to see it for my 15th birthday. I kept nudging my mom and saying, "I can do that!" My 16th birthday came and I auditioned, but they didn't want to get a tutor on set for the show. And my 17th birthday came and I went online to see if [the Broadway production] was casting. My thought was, "I'm just going to keep auditioning until they get so sick of me that they hire me." But the site said they were casting the movie, for the ages between 17 and 24.

And it literally was fame overnight! I was ready for it. I went into it with open arms, ready for whatever's next. My mom asked if I was going to college, and I said, "I want to go to the University of 'Hairspray.'" I never could think I could work with people like that -- and that John Travolta would play my mom. I want him to play my dad next. He's amazing and everybody was amazing on set. I had the time of my life. I went around the world with Zac [Efron] and my mom. It was incredible to see countries I'd never seen before! I'd never had a passport.

The "Hairspray" casting was such a particular, unusual method, looking for a complete unknown. As a known quantity now, how do you pursue roles?

Sometimes there's a straight offer. We love those. And yet, again, I'm not afraid to get into the audition room with these big directors and audition for them. I'm not afraid -- I look at myself not as a celebrity but as a regular person who's just trying to get a job. When they see that, they see that I'm a real person. I'm the real person I've been telling them about. I've had a blast going in and auditioning. I always say that every audition is an opportunity -- even if you don't get the part, you get to play that character for five minutes in the audition. It's fun either way.

We're doing this interview over the phone because you live on Long Island. Has that distance from New York and Los Angeles hindered your career?

It's been helpful. I have my family around me 24/7. I tell them what each script is about. We either get a yea or a nay. They either say, "It sounds like a great project, we should do it," or "That's not up your alley, that's not right for you." But then again, I have my own opinion. I'm 24 years old. I kind of sit in the middle and weigh the pros and cons.

Do you prefer independent cinema? By now you've worked more there than in studio projects.

You get to really show your creativity in independent films -- I love big-budget films, don't get me wrong! Those are so much fun. You can play cool characters. But my decision-making process is about what speaks to me and what I feel in my heart is right for me within my morals. I would never do anything to embarrass my parents. I hold them in high regard. I don't want my brother going to college and the other students saying, "I saw your sister's rack in a movie." That's not something ... That's something that if that came along and somebody asked me to do a nude scene, I'd have to really think about it, and it'd have to be the right people and the right reasons.

What is the biggest thing you learned in your rise to fame, as it were?

One major thing I learned in my initial rise to fame -- as you would say it, not as I would say it -- is to remain yourself and always stay yourself. I am the same person. You can ask my junior prom date. I'm still Nikki. I'm never going to change. I got that advice from the most wise man in this industry. He's John Travolta. I played his daughter. He played my mom. Those are two roles that are very nurturing.

Talk a little about trying to make it in Hollywood as a plus-size actress.

It's definitely been something I've struggled with. It's kind of like one type of girl they're always looking for. It can drive a plus-size actress crazy at the end of the day. But I really don't let it get to me. I'm very aware of my body. I'm very aware of myself. I love my body. I love myself. If -- if -- a movie were to come along that was blowing my mind amazing, and it had a nude scene, and it had a scene where I was topless or whatever, I would definitely consult with my parents and say, "Is this the role for me to break out completely?" The roles I've played before have been kind of delicate. I'm getting into the nitty-gritty. In "Geography Club," for instance, I play a lesbian.

What sort of performers are your role models? Whose career do you want?

In the industry, Liza Minnelli has been wonderful to me, and I'm extremely close with Lainie Kazan. Lainie has given me so much advice about this business. I'm very fortunate to have her. Out in L.A., my hairstylist keeps me on the straight and narrow. He teaches me about life. In real life, I aspire to be my mom. She's a very strong woman who is amazing and takes care of her family first and I admire her so much for that. She's plus-size and breathtakingly gorgeous. She shows me you don't have to be a size zero to be gorgeous.