No justification for Obama's war on First Amendment 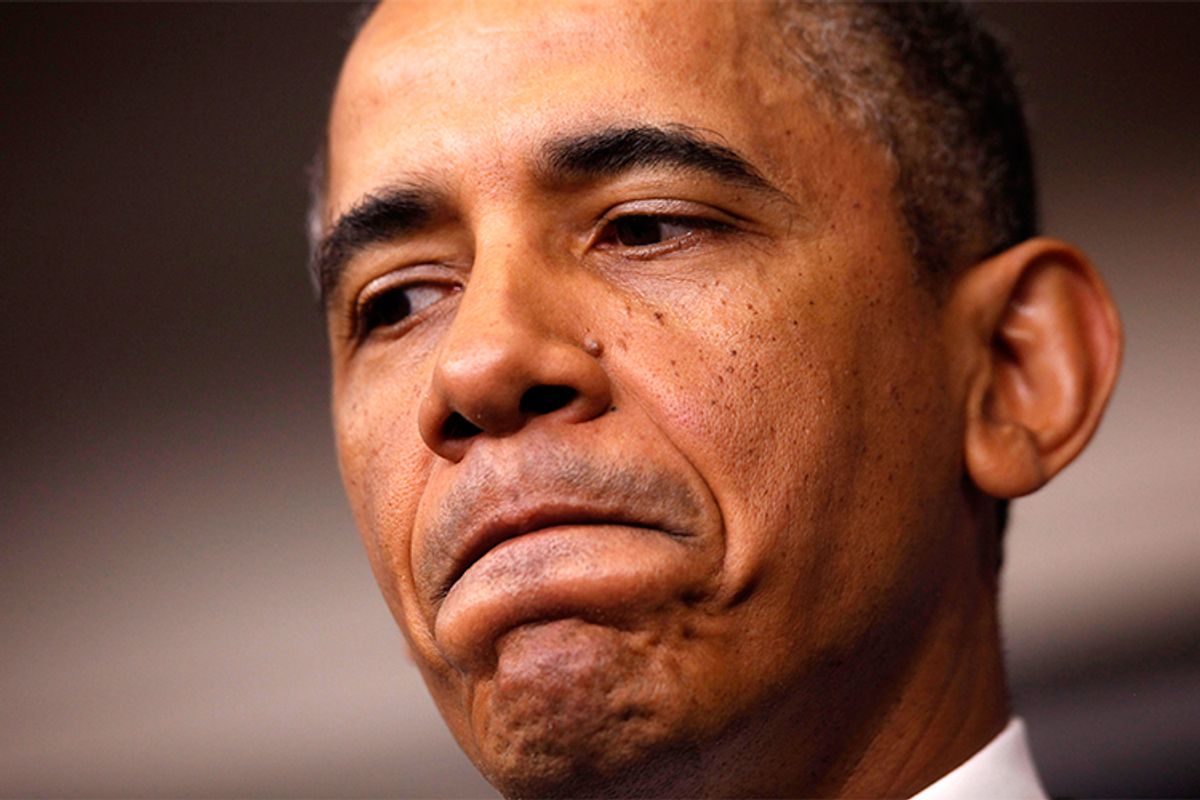 The U.S. Justice Department’s secret seizure of phone records of reporters and editors at the Associated Press is nothing less than a continuation of attacks on freedom of the press that have been ongoing under the administration of President Barack Obama.

Carl Bernstein, famed investigative journalist who broke the story on the Watergate scandal with Bob Woodward, appeared on MSNBC’s “Morning Joe” and declared this is a “matter of policy.” It goes right up to the president and the people who surround him, the very officials who have waged an unprecedented war on whistle-blowers and leaks.

He also explained, “The object of it is to try and intimidate people who talk to reporters, especially on national security matters. National security is always the false claim of administrations trying to hide information that people ought to know.”

The AP reported yesterday that the Justice Department had “secretly obtained two months of telephone records” of reporters and editors, who worked for the AP. The records “listed incoming and outgoing calls, and the duration of each call, for the work and personal phone numbers of individual reporters, general AP office numbers in New York, Washington and Hartford, Conn., and the main number for AP reporters in the House of Representatives press gallery, according to attorneys for the AP.

They came from “more than 20 separate telephone lines assigned to AP and its journalists in April and May of 2012.” There is no way of knowing the “exact number of journalists,” who used the phone lines during this period, however, “100 journalists work in the offices whose phone records were targeted on a wide array of stories about government and other matters.”

The AP only found out that records had been secretly obtained through a letter from US attorney, Ronald Machen, which the AP’s general counsel, Laura Malone, received on the afternoon of May 10.

The records were possibly “obtained from phone companies,” perhaps through the issuing of a national security letter (NSL). Officials chose not to notify AP before collecting information and claim they did not have to provide notice, citing an exemption in federal regulations.

“The government would not say why it sought the records. US officials have previously said in public testimony that the US attorney in Washington is conducting a criminal investigation into who may have leaked information contained in a May 7, 2012, AP story about a foiled terror plot,” AP further reported. The story included details of a CIA underwear bomb plot sting operation in Yemen. And, AP had consulted the government ahead of publishing and delayed publication out of respect for national security interests that could have been implicated.

AP Executive Editor: “None of Us Have Ever Seen Anything Like This

AP executive editor Kathleen Carroll said on “Morning Joe,” it was “distressing that the Justice Department felt the need to seize our records and not tell us about it.” It is “distressing to think that, without our knowledge, someone is looking at phone calls that we make in the course of daily business.”

When asked about the chilling effect this could have on sources, outspoken government employees or whistle-blowers, she stated, “I’ve been in this business more than thirty years, and our First Amendment lawyers and our lawyers inside the AP—and our CEO is also a well-known First Amendment lawyer—none of us have ever seen anything like this.”

CEO Gary B. Pruitt wrote in a letter to the Justice Department, “These records potentially reveal communications with confidential sources across all of the news gathering activities undertaken by the AP during a two-month period, provide a road map to AP’s news-gathering operations, and disclose information about AP’s activities and operations that the government has no conceivable right to know.”

An Inevitable Result of Bipartisan Hysteria Over Leaks

Lawmakers have expressed outrage, but citizens should understand that they helped create the political climate for which the Justice Department would find it permissible to engage in this conduct. This is an inevitable result of leaks hysteria on Capitol Hill in June of last year.

An investigation into leaks on the “kill list” was not launched, but Attorney General Eric Holder did announce investigations into the leaks of information published in stories on the CIA underwear bomb plot sting operation and cyber-warfare against Iran.

“The Justice Department did not respond to a question about whether a similar step was taken in the other major government leak investigation Mr. Holder announced last June,” according to Times reporter Charlie Savage. So, it is unknown if the Times has been subjected to a similar fishing expedition. Regardless, the Justice Department engaged in this unprecedented act because people like Feinstein declared, “The leak really did endanger sources and methods,” and, “The leak, I think has to be prosecuted.”

A Dragnet Operation in Violation of Federal Regulations

According to official Justice Department legal guidance, “There should be reasonable ground to believe that a crime has been committed and that the information sought is essential to the successful investigation of that crime. The subpoena should be as narrowly drawn as possible; it should be directed at relevant information regarding a limited subject matter and should cover a reasonably limited time period.”

However, it is evident that the information obtained was not strictly limited to information “essential” to investigating any crime. Pruitt argued in the letter to the Justice Department, “The sheer volume of records obtained, most of which can have no plausible connection to any ongoing investigation, indicates, at a minimum, that this effort did not comply with 28 C.F.R. §50.10 and should therefore never have been undertaken in the first place. The regulations require that, in all cases and without exception, a subpoena for a reporter’s telephone toll records must be ‘as narrowly drawn as possible.’ This plainly did not happen.”

The regulation also states that news media are to be notified when it is determined “such notification will no longer pose a clear and substantial threat to the integrity of the investigation.” If this does not happen, there must be notification “within 45 days of any return made pursuant to the subpoena.” So, when did the Justice Department get something in response to their request for information on the AP and how much time elapsed before they notified the AP’s general counsel?

Of course, it is entirely possible the Justice Department was not adhering to the legal guidance that is public and adopted some secret interpretation of what was permissible. They may have cherry-picked rules and calibrated their actions to maintain a veneer of legality, even as a wide array of communications were sought that the Justice Department had no right to obtain.

A Similar Example Where the FBI Violated the Rights of Journalists

FBI agents in 2004 obtained the phone records of Washington Post staff writer Ellen Nakashima, “who was based in Jakarta, Indonesia, at the time,” which the Post reported in 2008, after FBI director Robert Mueller apologized.

“The FBI also obtained telephone records of an Indonesian researcher in the paper’s Jakarta bureau, Natasha Tampubolon,” according to the Post. “Records of New York Times reporters Raymond Bonner and Jane Perlez, who worked in Jakarta in 2004, also were compromised, the Times confirmed yesterday.”

Then, the FBI also would not disclose what had prompted the seizure of records but the Post noted reporters targeted had been “writing articles about Islamic terrorism in Southeast Asia.”

A Justice Department Inspector General’s report released in 2010 indicated this was part of a wider abuse of “exigent letters” or the abuse of the process in which NSLs can be issued so records can be obtained. The FBI had invoked non-existent terrorism emergencies to collect 2,000 US telephone call records.

In total, according to the IG report, “Company A provided the FBI with toll billing records for 1,627 telephone calls. Of this total, only three calls (.2 percent) fell within the 7-month period of interest identified by the case agent as relevant to the investigation.”

Additionally, the “FBI uploaded the records” into a database, where they remained for “over 3 years, unbeknownst to the prosecutor,” Counterterrorism Division management and FBI Office of General Counsel attorneys, until IG investigators “determined that the records had been acquired and notified the FBI General Counsel.” The records were “subsequently purged.”

A Fishing Expedition into the Source of the Stuxnet Leak

On January 27 of this year, the Post reported on the FBI’s investigation into the email accounts and phone records of current and former government officials linked to journalists. They were searching for those who had been sources for Sanger’s story on the use of Stuxnet to destabilize Iran’s critical infrastructure.

Prosecutors were “pursuing ‘everybody’—at pretty high levels.” The Post reported, “Several current and former officials” had been confronted with “evidence of contact with journalists.” The FBI was believed to be using “sophisticated software to identify names, key words and phrases embedded in emails and other communications, including text messages, which could lead them to suspects.” They were not only pursuing records of communications by officials in government but also those officials’ private communications.

All of which suggests that the government not only finds it can go fishing for any and all government employees’ records in this case but also journalists’ records as well.

There is no acceptable justification for this conduct by the government. It is a gross intrusion into the privacy of members of the press and an assault on the news gathering process itself, as it targets the freedom of speech of sources and whistle-blowers who may be talking to reporters on national security stories. Yet, it must be understood, as Bernstein said, this is a result of policy.

As Justice Department whistle-blower Jesselyn Radack, who now works for the Government Accountability Project, wrote when there were calls to investigate leaks last year, the establishment media will soon be left with nothing to report but “Executive Branch talking points when their other sources are intimidated into silence, and then Americans will be an even less-informed citizenry and less equipped to question government actions.”

Few took notice of the Obama administration’s policies and how they threatened freedom of the press when leaks hysteria took hold of Washington. But, now that an entire establishment news organization is known to have been targeted by the nation’s surveillance state, perhaps, views toward the administration will rightfully sharpen.