Why I quit the Republican Party

Once called the future of the GOP, Latino outreach director Pablo Pantoja tells Salon how intolerance made him bolt 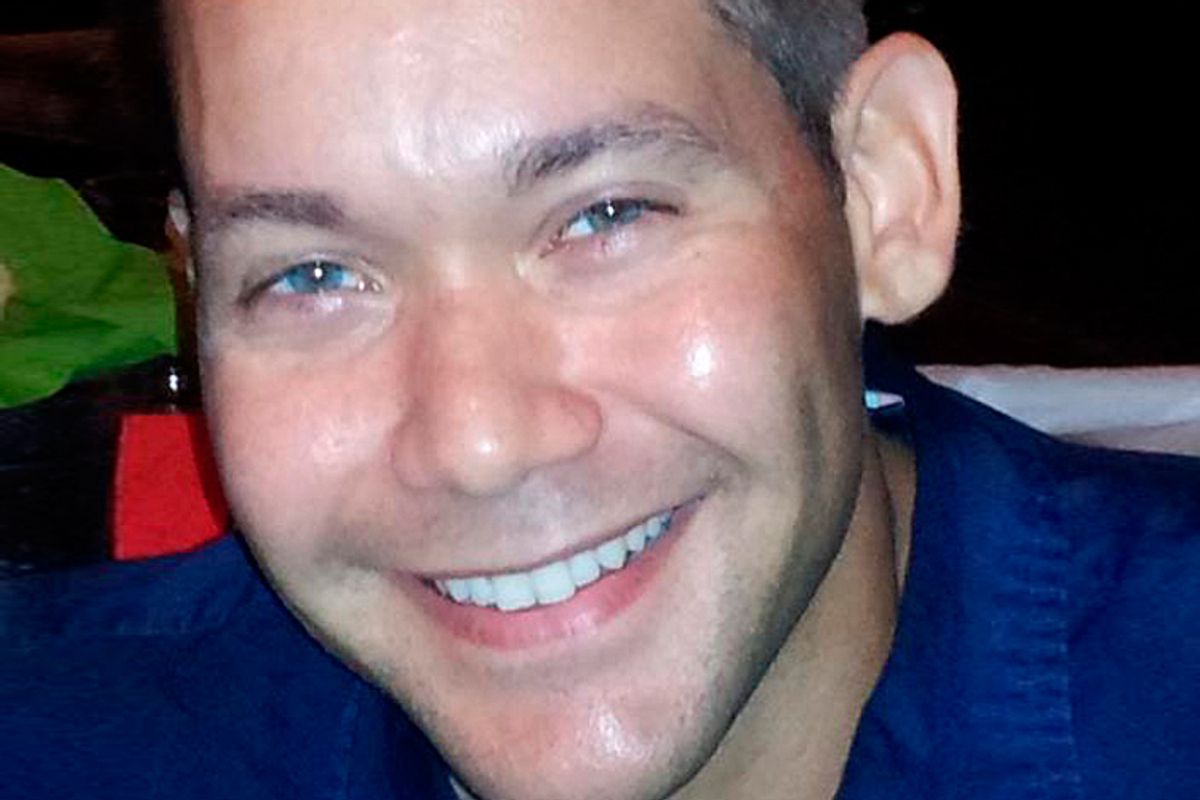 A year ago, Pablo Pantoja was the future of the Republican Party, courting fellow Latinos for the conservative cause and stumping across Florida with Ann Romney’s brother. "Hispanics in the area are going to realize the Republican Party is where they belong,” the Puerto Rico-born Iraq vet told the New York Times in April 2012, just a week after being named the Republican National Committee’s Latino outreach director in the electorally all-important Sunshine State. "We are going to engage Hispanics and Latinos like we've never done before," Reince Priebus had told reporters that month in a conference call introducing Pantoja and his counterparts in five other battleground states. (On Election Night, Mitt Romney lost all of those states except for one, North Carolina.)

Last night, Pantoja put the Grand Old Party in his past. In a moving online letter, he rejected his half-decade of work as a Republican operative and announced he’d become a Democrat. The reason was simple: He’d become fed up with “the culture of intolerance” on the right. “When the political discourse resorts to intolerance and hate, we all lose in what makes America great and the progress made in society,” he wrote, singling out the Heritage Foundation’s recent attacks on immigrant intellectual capacities as the icing on a very large prejudice cake.

Pantoja’s flip was dramatic, and it could be a bellwether for conservatives’ well-documented troubles with minority voters. But the ideological gulf between Republicans and Democrats is vast, and no thoughtful person crosses that divide quickly or easily. Who is Pantoja, really, and how did he decide when enough was enough? In an exclusive interview with Salon, he offered new details on his career, how he was pigeonholed, and how he flipped – as well as on how the two parties approach Latino issues differently.

For a long time, he says, he didn’t understand what the Democratic Party was really about, assuming it was a pack of socialists trying to destroy American freedom. But he began to realize his misconceptions. “The only way some of these elected [official]s can function in the Republican Party is if they take these extreme positions,” he says. Democrats, on the other hand, “seem more in tune with the reality of what happens in diverse communities.”

When did you first get involved with the GOP? What were the issues that contributed most to your political involvement?

I became a volunteer for Sen. John McCain during the primary on his presidential run. I also volunteered for the local party. I respected his service as a war hero immensely and everything he endured. The issues that contributed the most to my interest were the business-minded issues that the GOP stood for and the entrepreneurial sense, if you will, that I gathered from the overall concept.

What was your progression through the GOP's ranks/positions of responsibility like?

How did you first get involved with Hispanic outreach for the Republicans?

I volunteered first. Then they needed another field director in Central Florida during the 2010 midterms, so I took the job.

Did you see it change much in the past five years? If so, how?

I have seen a change toward the extremes. Perhaps the last round of immigration debates brought some of the same discourse, but this is new for me. Sen. Rubio has suffered being ridiculed [since announcing his support for immigration reform] by those who now denounce him but once supported him. On the surface, Mexican hats on a picture of Rubio seem like a bad joke. But then you hear commentators saying some very misguided things that unfortunately do resonate with the base of the Republican Party. Then you hear about this extremist study. So on and so forth.

Others in the party have called Spanish the language of the ghetto, then later apologized when it was convenient. I would have thought that was old stuff, but again, look at the current immigration debate and the studies behind it.

These aren't just gaffes out there that are made by some elected Republican calling people "wetbacks" and such. These are core issues of intolerance that are part of that culture. For example, how does it make sense to drug-test people because they are taking welfare benefits? Some may argue that it’s OK because they want to make sure the money is not going to fraud, but I'm starting to think that's not the case.

Did you see other folks in the GOP wrestling with these issues like you? Did you ever have any frank discussions about uneasiness with the party's direction?

I won't mention names, but I did have conversations about immigration where increasingly I had to defend the fact that the people most affected were human beings.

I had shared some concerns here and there, but it’s difficult sometimes without looking out of place. I'm not entirely sure how others manage expectations. Some say they stay to change it from within, but that's their choice. I think there would be too much to change; they’d have to turn the Republican Party into another party completely.

The only way some of these elected [official]s can function in the Republican Party is if they take these extreme positions, such as the immigration posturing. If they don't denounce these racist remarks, then perhaps they actually believe in them. I can't say for sure. Recently, the only way to satisfy the base of the Republican Party was to adopt an anti-gay and lesbian platform. Another example of intolerance. Even if within the party there are disagreements, the intolerance shouldn't be accepted.

Was it the GOP doing things all wrong, or did you see Democrats doing something right on the issues that mattered to you?

I did see Democrats being inclusive of others, tolerant, and embracing people. I also noticed more over time how much Democrats demonstrated care for those in need. Organizations that some consider left-leaning, like the ACLU, do some of the most crucial work. Some forgotten people get their rights trampled upon. Some of these people are in genuine need but there is no immediate attention given to them. They are sort of left behind and forgotten.

Democrats embrace Hispanics and the culture as a positive thing. Democrats seem more in tune with the reality of what happens in diverse communities. Some solutions in governmental policy are better than others, but there is room for fiscal sanity in the Democratic Party. People's rights, from voting to other protections, are important. We can't just dismiss those because of some eugenics-based study.

One doesn't make such a dramatic decision, especially when it bears on one's livelihood, without a lot of careful consideration. Did you talk it over with anyone, on either side of the aisle?

Democrats that I knew from college have always been classy. I did reach out and had become more inquisitive. I mulled it over and although I am absolutely sure, it hasn't been easy. I can't say it was overnight, either. It has been a process. I know others have had to sacrifice more than I have, especially for important issues, and although I am putting a heck of a lot on the line, I have no doubt that it's worth it.

I got to thinking, if I was a target for, let's say, discrimination for being an immigrant, the only ones that would be there to take up the fight would be the ACLU, for example. Then you think about the many that are in such difficult positions. Some who have decided to come here only to seek a better way of life, to achieve the American Dream, to live free from persecution, to choose who they associate with and love. Many are here responsibly to care for their loved ones. I cannot help but think about those who suffer in the shadows, and about the hatred that arises against them just because they are here.

Did you fear sharing your concerns with conservative colleagues?

Part of the reason for being so open about this is because some who are friends and have known me from working Republican politics would also learn about my change. There may be some that have not yet reached the same opinion that I have, but maybe they will sometime. Hopefully others reach the same realization and I can offer the same welcome to them as I have been offered. I have been worried about it. I'm not sure they all understand, and some have expressed downright intolerant views about it. I have to say, however, that there are some wonderful people that have expressed kind wishes.

Can you think of a turning point when you first made the decision?

I can think of more recent ones, like what has been said recently about immigrants, but it has been a growing process. I think I see things in a new light and finally realized it recently. I didn't expect this much attention, since I haven't been happy with the GOP as a whole for a while now. It had been evolving to the point where it was too difficult to stay.

How long did it take to write your letter?

I didn't just sit and write it. I wrote it and rewrote it several times. I didn't want to offend and wanted to be mindful of others as best as I could while addressing the recent issues.

Are there issues where you still find the Democratic platform a little too narrow or in tension with your beliefs?

It’s a two-party system and it's probably always going to be that way. I understand those who decide to be registered independents, but the freedom to associate in a political party without repression is a wonderful gift we have in America.

Who are your political heroes, left or right?

I appreciate a whole new level of Ronald Reagan now. I need to read up some more on his own party switch. George H.W. Bush is worthy of admiration and gratitude for his service during World War II as a fighter pilot. We often forget the sacrifice he made joining the Navy after Pearl Harbor. Jeb Bush is a leader and has even taken a pragmatic approach, occasionally praising President Obama. We have to admire that in today's world. I admire Hillary and Bill Clinton. I have a newfound respect for Justice Sonia Sotomayor. Her recent visit to the University of Puerto Rico meant a lot and I felt inspired by it. Some of the rhetoric before had prevented me from understanding the greatness behind her work. Rosa Parks: I cannot imagine all she went through in her day. Dr. Pedro Roselló, former governor of Puerto Rico, who has done immense work on behalf of the Puerto Rican community and civil rights. Former governor Luis Fortuño has also been a leader through unpopular times. Many others, but it’s a long list.

Your letter had a pretty clear message for Republicans who read it. Do you have anything else that you would say, particularly to Florida Latinos of prominence in the GOP like Sen. Marco Rubio or Rep. Ileana Ros-Lehtinen, to defend your decision or get them to reconsider their positions?

The issues that are being pushed, especially immigration, have to take into consideration foremost the many lives and people they affect. Sen. Rubio and Rep. Ros-Lehtinen have many more years in this and have their reasons to be who they are, and I wouldn't want to give them any advice. My letter is my personal opinion and political stance. They have theirs and I respect that.