From "Mad Women" to Stephen Colbert: 5 creative protests that got people talking

A roundup of protests that show how, sometimes, a little razzle dazzle can deliver a big message 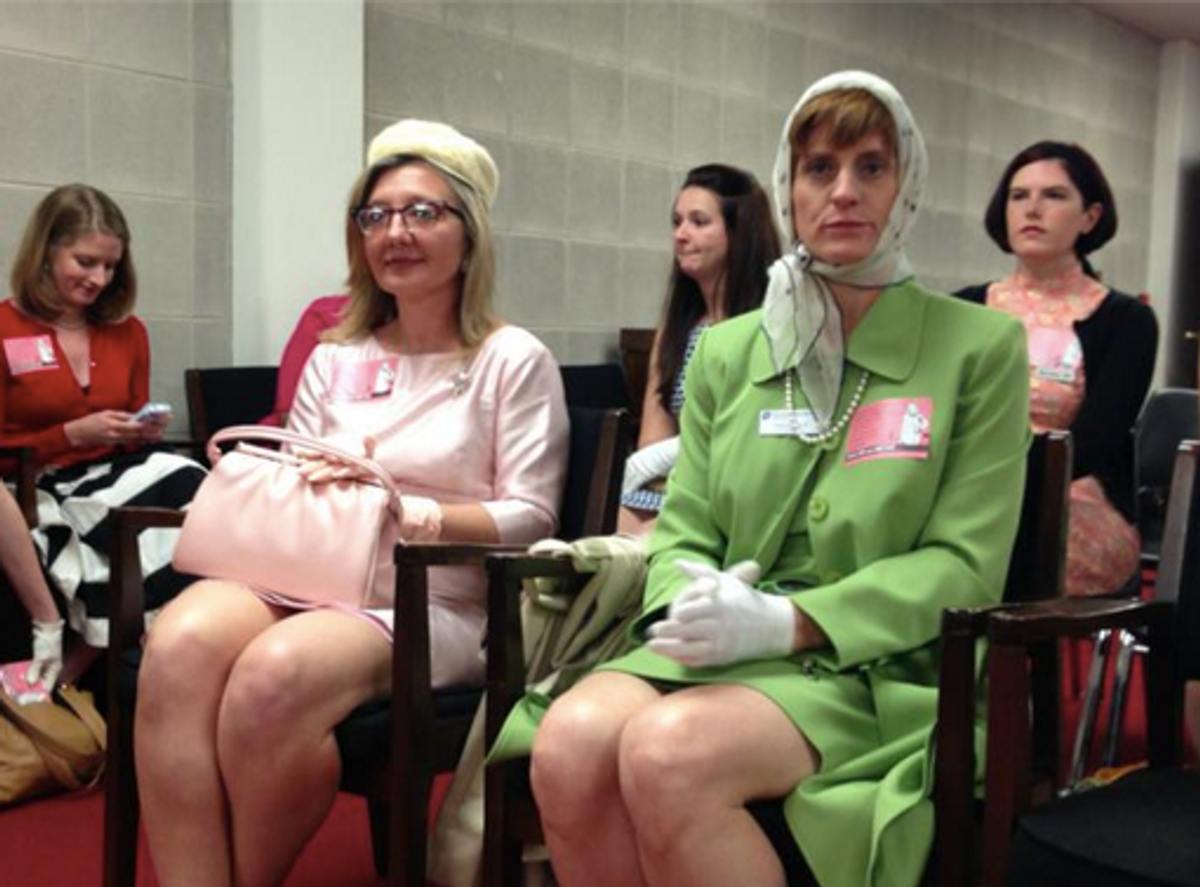 On Wednesday, a group of North Carolina women dressed up in 60s era "Mad Men" garb to protest a bill that would allow employers to refuse to cover contraception for "moral" or religious reasons.

The theatrical protest, organized by Planned Parenthood of Central North Carolina, wasn't the first time activists have employed a bit of razzle dazzle to draw attention to an issue and get people talking.

Below, a roundup of five protests that show how, sometimes, a little flare can make a big difference.

As noted above, the North Carolina group made a splash on Tuesday, wearing dapper vintage outfits to make their point that access to birth control is basic health care. The Republican-controlled judicial committee went on to approve the measure, which now heads for a full vote in the General Assembly, but the Mad Women caused a social media stir and brought national attention to a bill that may have otherwise flown under the radar, as Laura Basset reported for the Huffington Post:

“We love a good vintage look -- but not when it's running the state legislature," Melissa Reed, Vice President of Public Policy for Planned Parenthood Health Systems, said in a statement. "That is why we are here to remind these politicians and bosses who continue to insist that they should be the ones who decide if and when women can access birth control...”

“We’re here to say to state legislators who want to turn the clock back to the 1950s: We like watching Mad Men -- but we don’t want to live in it,” Paige Johnson, Vice President of Public Affairs for PPCNC, said in a statement on Wednesday. “Women's preventive care — including birth control -– is basic health care. Politicians and bosses have no business denying women access to this basic health care. This shouldn't be a revolutionary idea, but unfortunately it is to some.”

Driving while female -- in Saudi Arabia

In a widely-publicized act of civil disobedience, Manal al-Sharif ignited an international conversation about women's rights in Saudi Arabia by defying the country's ban on women drivers -- and putting the whole thing on YouTube. Since rocketing to civil disobedience stardom in 2011, al-Sharif is now the face of the Saudi Women2Drive movement, and has been credited, among other feminist groups, with moving the needle on the issue. And support from high-profile Saudis may indicate that the country is ready for change (incremental as it may be): Saudi Prince Alwaleed bin Talal recently shared his support for women drivers on Twitter.

Stephen Colbert took his arch-conservative schtick off air and to a House sub-committee hearing on immigration in 2010. His presence at the hearing may have been a stunt, but his commonsense and humane views about the rights of America's migrant workers made other members of Congress look like the real jokers. When asked why he agreed to testify before the sub-committee, a deadly-serious Colbert replied he was there because "migrant workers suffer. And have no rights."

In 2010, Palestinian activists wore blue face paint and costumes to make a theatrical point about the effect of Israel's separation wall and policies in the West Bank. Like the Na'vi from James Cameron's "Avatar," one protester explained: "We are here Avatars and Na’vis fighting against the sky people who are taking away our land and occupying our people. Here, as opposed to Hollywood, this is real."

When Westboro Baptist targeted a Santa Monica high school back in February because of its pro-LGBTQ student policies, students, faculty and other members of the community came out en mass with their own take on the hate groups iconic signs. The results were moving and, ultimately, effective: the community show of support quickly sent Westboro packing.