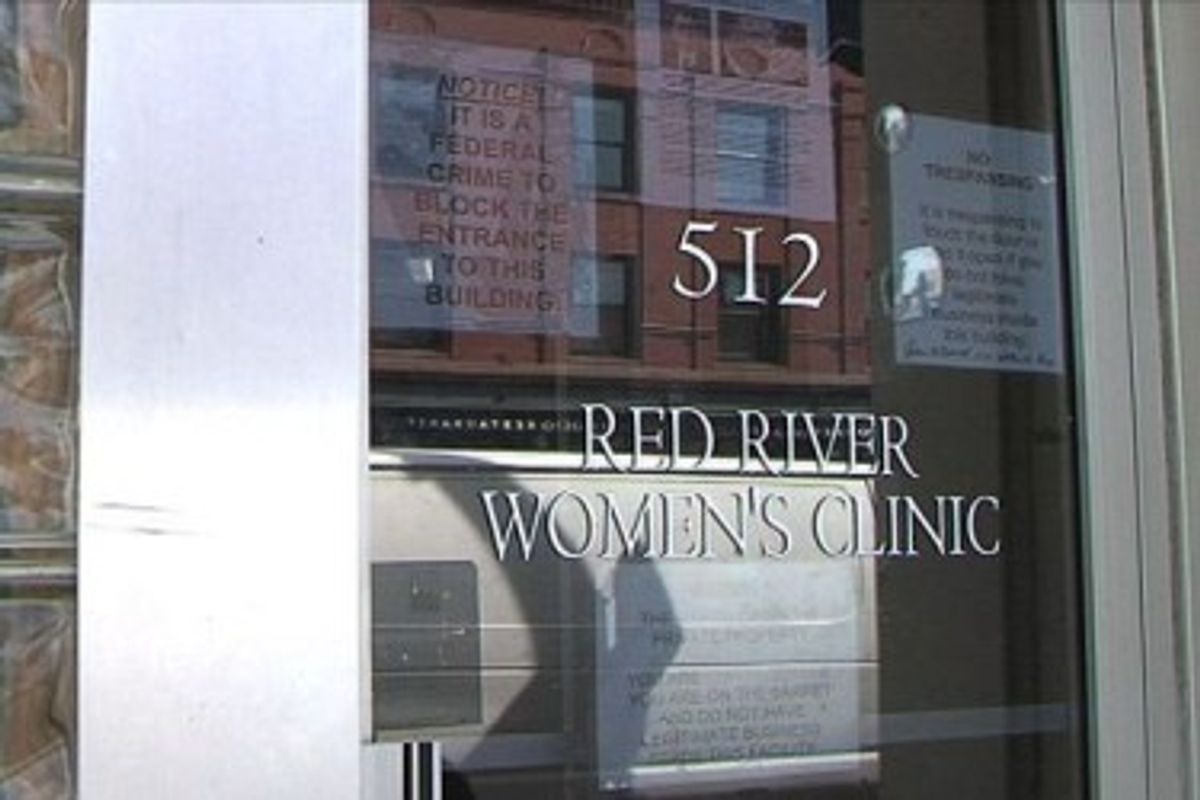 North Dakota's last remaining abortion clinic has filed a suit challenging a law that requires doctors who perform abortions to obtain hospital-admitting privileges, the first in a series of legal challenges reproductive rights advocates have promised to wage against the state's draconian abortion restrictions.

The Red River Women's Clinic argues in the suit that the law could make abortion impossible to access in the state, effectively banning it.

President and CEO of the Center for Reproductive Rights Nancy Northup, a co-sponsor of the suit, said in a statement on Wednesday that the law is a dangerous barrier to safe abortion care that could jeopardize women's health: "With their relentless campaign to end safe and legal abortion in North Dakota, lawmakers have effectively told the women of their state, 'We don't care about your health, we don't care about your safety, and we sure don't care about your constitutional and human rights.'"

As the Associated Press notes, the requirements mandated by the law, set to take effect on August 1, are almost impossible for the state's last remaining clinic to comply with: "Opponents of the measure say it's impossible for abortion doctors in North Dakota to meet the minimum number of hospital visits required for because the procedure is safe and women rarely need further care."

Robin Marty at RH Reality Check provides more context for why the law poses such a threat to legal abortion in the state:

The bill requires privileges from a hospital within a 30-mile radius from the clinic, a move that limits the choices to just two hospitals in the state. But a doctor must admit ten patients per year to get hospital admitting privileges from Sanford Hospital, the most logical hospital for RRWC to transfer to since it’s just five blocks away. But with the hospital’s ten-admitted-patients-per-year rule, the hospital is off the table as an option for the clinic.

“I’ve had one time that I’ve had to admit a patient in the last ten years,” [director of Red River Women’s Clinic Tammi] Kromenaker explained. “We are very selective about the physicians we hire for our clinic, because we know we are a target. As the only clinic in the state, of course we have worked to ensure that we have the highest quality doctors. I would never employ a doctor who had to admit ten patients a year. That would mean they were a terrible doctor.”

There’s one other hospital that’s a transfer possibility for the clinic—Essentia Health—but it is roughly five miles away, rather than five blocks. Should there be a true emergency, the clinic would have to transfer patients further away, which is more dangerous than if the law was never proposed in the first place.

In addition to the law being challenged by the suit, North Dakota lawmakers recently approved a ban on the procedure as early as six weeks, the most restrictive abortion law in the country.