Embroiled in multiple scandals at once, the president is drawing cross-party criticism unseen since Watergate 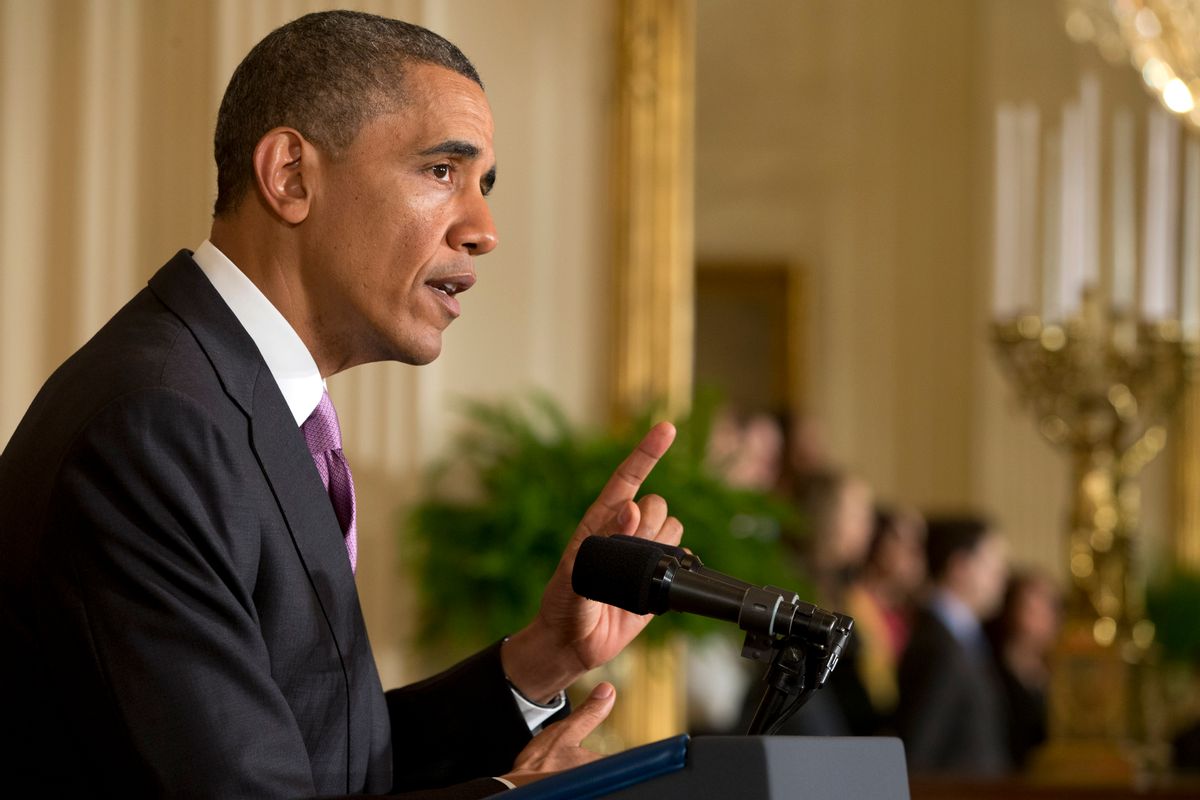 President Barack Obama speaks about the Affordable Care Act in the East Room of the White House in Washington, Friday, May 10, 2013. (AP/Jacquelyn Martin)
--

The Barack Obama administration finds itself under attack from both the left and the right this week as it struggles to deal with three major scandals: the news that the Department of Justice had staged an unprecedented raid on The Associated Press’ phone records; the revelation that the Internal Revenue Service has been targeting right-wing groups; and the ongoing fallout from the September attack in Benghazi, Libya.

It is the AP story that has most galvanized the media, threatening to disrupt the generally sympathetic coverage that the White House has enjoyed from large swaths of the press.

Everyone from CNN to Fox News took aim at the Justice Department for its wide-ranging subpoena of the AP’s phone records, thought to be an attempt to find the source of a leak regarding a foiled terrorism plot in Yemen on the first anniversary of Osama bin Laden’s death.

Attorney General Eric Holder is due today to face tough questions on issues like the AP phone records affair by the Republican-led House Judiciary Committee.

But the grilling is already well under way.

The AP’s president, Gary B. Pruitt, sent a letter to Holder, saying there could be “no possible justification” to what it called “a massive and unprecedented intrusion by the Department of Justice into the newsgathering activities of The Associated Press.”

CNN’s John King, who worked for the AP early in his career, was equally blunt:

“This is very chilling,” he said. “The government gets angry about leaks of classified information. I understand that ... But did they cross a line here? Did they do something inappropriate here, did they possibly do something that went over legal barriers here?”

CNN legal analyst Jeffrey Toobin maintained that the seizure was legal, if inadvisable.

"I have never heard of a subpoena this broad," Toobin said. "It's legal, as far as I can tell. The administration isn't violating the First Amendment. But they are certainly doing more than has ever been done before in pursuing the private information of journalists. And we'll see if there's any political check on them, because there doesn't appear to be any legal check on what they're doing."

Toobin did acknowledge that the Obama administration has been “incredibly aggressive” in prosecuting leakers. In fact, as CNN’s White House correspondent Jessica Yellin remarked at a press conference Tuesday, this White House “has prosecuted more people for leaks than every other president put together.”

This is true; over the last hundred years, there have been 10 prosecutions of officials for leaking information, journalist Steve Coll writes in the New Yorker. “Six of them have occurred on the watch of Attorney General Eric Holder.”

There certainly was pushback from the media. White House spokesman Jay Carney and Holder faced unusually rough handling at the hands of reporters at twin press conferences Tuesday, as the pair played hot potato with responsibility for the scandal.

Carney sought to distance the White House from the matter:

“We are not involved at the White House in any decisions made in connection with ongoing criminal investigations, as those matters are handled appropriately by the Justice Department — independently,” the White House spokesman told reporters.

The Department of Justice was doing its own dance. Holder defended the DOJ’s actions, saying that the leak on the plot in Yemen was “if not the most serious” leak he has ever seen, then “among the top two or three,” and that it “put the American people at risk.”

That having been said, he promptly revealed that he had recused himself from the decision to go after the AP.

He, too, defended DOJ, saying in a letter to the AP’s Pruitt that the Department of Justice had balanced the public's right to know with national security.

"The subpoenas were limited to a reasonable period of time and did not seek the content of any calls," Cole wrote.

The AP rejected the DOJ’s attempts at justification and denied that it had jeopardized the nation’s security.

“We held that story until the government assured us that the national security concerns had passed,” wrote Pruitt, in a letter to the DOJ. “Indeed, the White House was preparing to publicly announce that the bomb plot had been foiled.”

The furor over freedom of the press almost drowned out another, possibly even more serious abuse-of-power scandal: the revelation that the IRS had been targeting right-wing groups for audits.

On Friday, top IRS official Lois Lerner, who heads the agency’s exempt organizations division, told reporters IRS staffers had singled out conservative organizations with "Tea Party" or "patriots" in their name that were seeking tax-exempt nonprofit status, subjecting them to extra scrutiny to see if they were abusing the tax law as it relates to political activity.

Everyone from former presidential candidate and archconservative Rick Santorum to President Obama himself rushed to condemn the IRS for its misplaced fervor.

Obama called the news “outrageous,” while Santorum, who heads a conservative grassroots organization called “Patriots Voices,” used it as a fundraising gimmick.

“There's no denying it. We are living under one of the most troubled administrations of the past century,” wrote Santorum in a mass mailing, urging supporters to contribute generously to stop the White House.

Lerner herself apologized for the IRS’ use of “inappropriate criteria” to target certain groups, earning this scathing reply from conservative columnist George Will:

“No, using the salad fork for the entree is inappropriate. Using the Internal Revenue Service for political purposes is a criminal offense.”

He may be right. The government has launched a criminal investigation into the actions of the IRS; the Treasury Inspector General for Tax Administration issued a report on the IRS efforts on Tuesday.

Obama called the report’s findings “intolerable and inexcusable,” while CNN’s Wolf Blitzer repeatedly used words like “damning” and “explosive” when he talked about it on air Tuesday evening.

Even Comedy Central’s Jon Stewart ripped into the administration on Monday night.

The irrepressible and relentlessly liberal host of "The Daily Show" complained bitterly that the administration’s actions had given credibility to ”the full-blown right-wing victimization complex” of conservatives. He accused the White House of managerial incompetence when it tried to do good, but “when government wants to flex its more malevolent muscles you’re fucking Iron Man.”

About the only good news for the Obama administration seems to be that last week’s big scandal — the alleged “cover-up” over the response to the attack in Benghazi, Libya on Sept. 11, 2012, has faded into the background a bit.

As recently as last week the Republicans were intent on portraying Benghazi as a scandal on the scale of Watergate.

Indeed, comparisons with the incident that ultimately drove President Richard Nixon from office have been cropping up more and more frequently.

Will wrote in the Washington Post that the IRS scandal had “echoes of Watergate,” and hinted that it should have the same outcome:

“Forty years ago this week … the Senate Watergate hearings began exploring the nature of Richard Nixon’s administration. Now the nature of Barack Obama’s administration is being clarified as revelations about IRS targeting of conservative groups merge with myriad Benghazi mendacities,” he wrote.

He was not the only one.

“Is Obama worse than Nixon?” lawyer James Goodale asked in The Daily Beast.

“The day the Obama administration went all Nixon on us,” Will Bunch of The Huffington Post writes.

The White House rejects the comparison, but Obama defenders are scarce on the ground these days.

With the bitter gridlock in Washington these days, many would welcome almost anything that helps bridge the political chasm between left and right.

But a united front in attacking the White House is probably not what anyone had in mind.