6 reasons Obama is losing the left 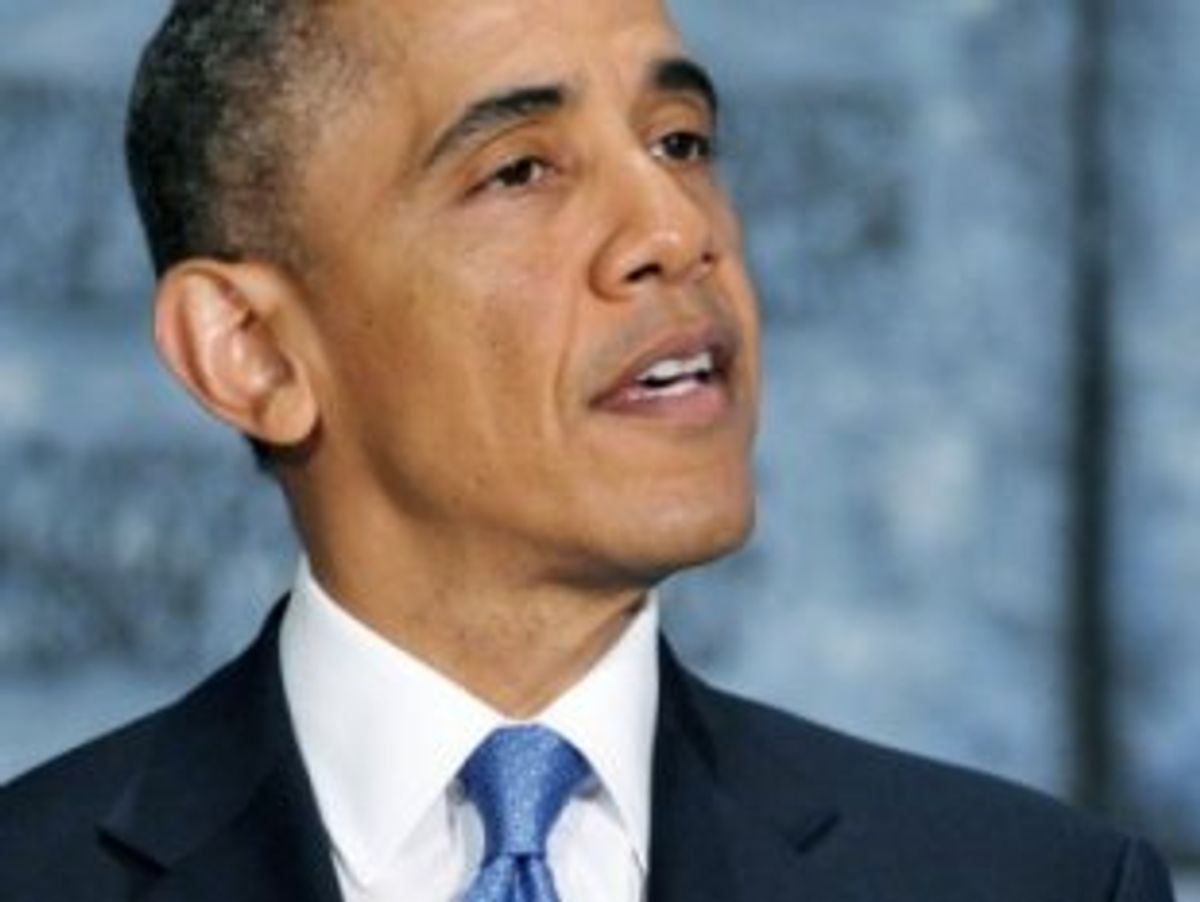 It’s not just the scandal fever that’s invaded Washington, where the Obama White House is dodging accusations that the IRS went after the Tea Party, or it lied in the fog of war in the aftermath of the deadly attack on the embassy in Libya, or the Justice Department went too far in spying on Associated Press to find out who was leaking details about the the CIA’s secret wars.

Obama’s popularity seems destined to slide downhill as his second term unfolds, even if polls taken just before this latest political moment show that Obama’s core supporters are still with him. Looking beyond this week’s accusatory headlines, there are a handful of single issues that will resonate among key Democratic constituencies and big-picture economic issues that seem destined to push Obama’a ratings down. He may not end his presidency in the low 20s like George W. Bush. But it’s not a stretch to say that Obama’s 51 percent approval ratings last week may be the best that he will see this term.

Progressives already know the sting of disappointment. His second term has been filled with frustrations, posing the question of just how weak can the White House be when it comes to domestic policy? Gun control is stalled. Immigration reform is in the hands of Republicans obsessed with border security and lifting quotas for low-wage workers. The Keystone pipeline appears headed for approval, despite climate change worries. The so-called sequester has begun, a political blunder that cuts federal spending but especially hurts poorer people.

“We’re not in a ‘blame Obama’ moment,” pollster John Zogby said late last week. “It’s hard for him to look too bad when the other side looks so much worse.”

That was before last Friday, when the IRS apologized to the Tea Party before the House Ways and Means Committee, other House Republicans ginned up Benghazi "whistleblowers," and the Justice Department confirmed its wiretapping of the AP.

Looking ahead, there are a range of economic issues—with the biggest concerning how the recovery could continue to stumble due to federal spending cuts and possible hits from Obamacare—that could drive Obama’s approval numbers very far down. Last week, Zogby called Obama’s 51 percent rating “almost bragging rights.”

“You have to start with the fact that 42 percent hate his guts,” he said.

Obama’s second term has not yet devolved from hope to nope, but let’s look at what will shape it—where key decisions do not all lie in the hands of uncompromising Republicans who pay no real price for their obstructionism on Capitol Hill.

The biggest game-changers are economic issues, starting with the two pillars that elderly Americans rely on—Social Security and healthcare. The current generation of people 55 and over is one of the first in many decades that does not have pensions and retirement plans. It is these entitlements that the GOP wants to cut—and Obama has gone along.

1. Social Security. Obama made a bad blunder with the sequester, where he put cuts on the table that are now damaging social welfare programs. His explanation that he did not expect the sequester to take effect makes his offer to put Social Security’s cost-of-living increase formula on the table even more baffling. First of all, Social Security is fiscally sound into the foreseeable future. But more important, cutting cost-of-living increases does nothing for elderly people who are not covering their expenses now. And it doesn’t exactly send a resassuring message to baby boomers who don’t have retirement accounts and are struggling to make ends meet.

2. Keystone pipeline. Environmentalists are not just getting thrown under the bus with what appears to be the administration’s growing support of the Keystone pipeline. Just as older Americans follow the entitlement debate, so too do younger people—not just the environmental movement—follow what is and isn’t happening with climate change. Atmosphere carbon levels keep going up and Washington keeps ignoring that.

The larger reality with the Keystone pipeline is that 21st century energy policy is dictated by the oil and gas industry. The New York Times recently had a story suggesting perhaps Obama could announce a bold climate change initiative at the same time that he approves Keystone. The odds are long that the pipeline will be built whereas new federal efforts to develop energy alternatives will likely be crumbs in comparison.

America has radically restructured its economy in past national emergencies—that’s what happened in World War II. But it’s not happening now. And that is all the more reason for youthful voters to become cynical about politics and Obama.

3. Obamacare’s rocky road. Today’s Republicans do not want any big new government program to work apart from law enforcement and the military. They have been attacking healthcare reform ever since it passed, and using every means available to kill it: filing lawsuits; undermining funding; predicting its demise. These attacks have increased as the reform’s implementation approaches key thresholds this fall. The White House has mostly not responded (although Obama gave a 20-minute speech on Friday defending Obamacare after weeks of Democrats’ demands that he do so).

Obama’s marketing team has said that it’s too soon to talk up the program. Astute healthcare reporters have said that is not exactly correct; too many details are unknown—so it’s premature to promote it. Apparently, Obamacare faces very big implementation issues. Only 17 (mostly blue) states and the District of Columbia have set up exchanges where people and businesses can buy new policies as of Oct. 1; the rest of the states will default to a federal exchange. And some of the biggest states aren’t embracing it. Florida cannot decide whether to take federal dollars to expand Medicaid for 1 million low-income people.

From a pocketbook standpoint, it’s hard to know what to believe. Healthcare is one-sixth of the national economy. But if the critics are even partly correct, Obamacare is going to cause dislocations. Newspapers have been running business page stories predicting that employers might cut back part-time workers' hours to escape the law’s insurance-buying requirements. Other critics are predicting that premiums for millions of self-employed people and for small businesses will double. They could, as the law has no cost controls in it. And the physicians also have real worries, saying that insurers will use the law to push small medical practices into mergers with hospital chains and healthcare corporations.

Nobody really can say what will happen with Obamacare, but the fiscal impacts are not coming in a strong economy. Meanwhile, the communications void is so big that a late April poll found that 42 percent of Americans don’t even know if it is still a law.

4. The struggling economy. We know that the Republicans’ hatred of Obama includes sabotaging the economy—look no further than the ongoing federal debt battles. But these fights already are hurting the economy by underming job creation and economic growth.

The Times last week reported that economists are now saying that deficit reduction has kept unemployment 1 percent higher than it otherwise would be—which means millions of jobs—and that it also has slowed nationwide economic growth by 2 percent. These analyses do not include the unfolding impacts of the sequester.

What really pushed George W. Bush’s popularity to its record lows was the economic meltdown of 2008, led by the implosion of the real estate market. Should Obamacare’s detractors be correct about jumps in healthcare costs for millions of people, coupled with deficit reduction slowing the recovery and new limits to entitlement programs, it’s almost certain that Obama’s popularity will plummet.

Zogby, a longtime pollster, said the reactions of Americans to the political paralysis has been to give up on the electoral process. “They’ve giving up on [asking] who is making it worse,” he said. “Folks are making their own adjustments in their own way.”

One of those adjustments is not voting. In 2010’s midterm elections, some 45 million fewer people voted, even though there was far more optimism about Obama’s agenda at this stage in his first term. Midterm elections always see lower voter turnout, but the 2010 election allowed ideological Republicans to recapture the House and many state capitals, such as Wisconsin where Gov. Scott Walker launched an anti-labor crusade.

5. Gun control and immigration. Right now the biggest items on the White House’s agenda are not in good hands. Both proposed new gun controls and federal immigration reform are at the mercy of Republicans in the Senate, where, even if they pass that body and go to the House, the fine print of these laws is going to be disappointing at best.

The White House keeps saying that 90 percent of Americans support better background checks for gun buyers. Yet even a new system of background checks is not going to overturn the 1997 Supreme Court ruling written by Justice Antonin Scalia that says states don’t have to share background check data with the FBI’s national system. The NRA may hate the background check proposal, but it knows that it will not amount to much in red state America.

On immigration, the prospect of a pathway to citizenship has kept Obama’s support from Latino’s in the '70s, which is higher than last fall. But the bill being shaped in the Senate has little-discussed features that are terrible, such as postponing citizenship for more than a dozen years (which helps the GOP keep its political power as American demographics change). Morever, enlarging the number of visa holders is only going to allow employers to keep underpaying workers—not pay a living wage. The bill isn’t just about more tech workers in Silicon Valley, it’s about lowering the wage floor in working-class America.

And finally, there’s the Clintons, who loom very large in Democratic Party circles.

6. No more Clinton rescues. Think back to the 2012 Democratic Convention and who best defended the president’s record. It was Bill Clinton, not Obama, who convinced the public that Obama deserved a second term. It looks like Obama’s 2008 top rival whom he chose as Secretary of State, Hillary Clinton, is getting ready for another White House bid. If that’s the case, she’ll be scrutinizing Obama’s shortcomings as well as anyone and will want to distance herself from the second half of his administration. In fact, her path to the presidency will depend on conveying a different set of competencies.

What this all means is there are many reasons to think that Obama’s best days will soon be behind him. And this week’s trifecta of mostly GOP-inspired "scandals," in the IRS, Benghazi and spying on the AP, only underscore that point.