At least 6 dead in Texas tornado

The twister devastated the city of Granbury, damaging homes and injuring dozens 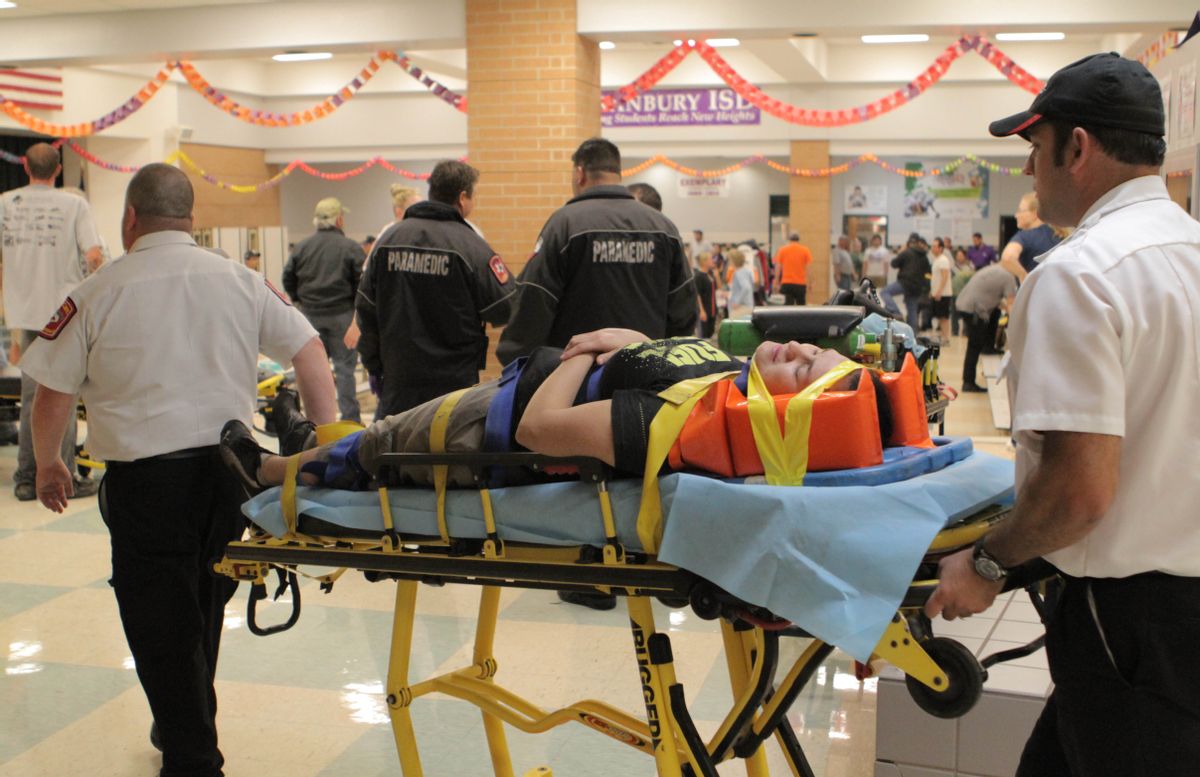 An unidentified injured person is carried to an ambulance in Granbury, Texas, on Wednesday May 15, 2013. (AP/Mike Fuentes)
--

"Some were found in houses. Some were found around houses," Deeds said. He also said the total could climb as crews pick through the rubble of shattered homes.

About 50 people were taken to a Granbury hospital, where 14 were admitted for treatment of injuries and two were transferred to a hospital in Fort Worth, about 35 miles to the northeast, Deeds said.

As many as 100 people were injured, said Matt Zavadsky, spokesman for MedStar Mobile Healthcare. His company sent three ambulances and a medical bus from its Fort Worth base to Granbury.

Deeds said officials were trying to account for 14 people, but it was not clear if they were missing or were away from the area for other reasons.

Hardest hit were two neighborhoods, Rancho Brazos Estates and DeCordova Ranch, in the southern end of the town of about 8,000 residents about 65 miles southwest of Dallas.

Ambulances from as far away as Fort Worth were being called to Granbury, said Tye Bell, Richland Hills police spokesman who was heading to Granbury on Wednesday night.

Rancho Brazos Estates resident Elizabeth Tovar said she rode out the tornado with her husband and sister as she clutched her 9-month-old daughter.

"We heard the winds whipping and glass smashing everywhere," said Tovar, 25. "I felt like a long time and when things died down I looked up and saw that the roof was gone."

Another resident of that neighborhood, Allacia Jenny, said she witnessed devastation in her neighborhood.

"The house across from mine looked like it was destroyed," said Jenny, 22.

Toppled large trees litter her yard, and "I saw power lines all over the place," she said.

At Stumpy's Lakeside Grill in Lake Granbury, the storm took diners and workers by surprise. Some people rushed inside from the patio and ducked under tables as the wind gusts and hail started, but nobody was injured, said Eric Martinez, a cook. Then they looked across the lake and saw several homeowners' boat docks "just get torn apart," he said.

"The boat docks just flew off, and they're actually gone," Martinez said, adding that the boards and other debris landed in some yards.

The same storm spawned another tornado that storm spotters told the National Weather Service was a mile wide. That twister tore through the southwestern quadrant of Cleburne, a courthouse city of about 30,000 about 25 miles southeast of Granbury.

There were no reports of deaths in that storm, Cleburne Mayor Scott Cain said, "but we do have the potential for some injuries." He had no estimates.

Cain had no estimate on the number of homes damaged, but he said he expected the number to soar into the dozens based on his inspection of damage ranging from roof damage to total destruction.

Another tornado hit the small town of Millsap, about 40 miles west of Fort Worth. Parker County Judge Mark Kelley said roof damage was reported to several houses and a barn was destroyed, but no injuries were reported.

Hail as large as grapefruit also pelted the area around Mineral Wells on Wednesday evening. A police dispatcher reported only minor damage.