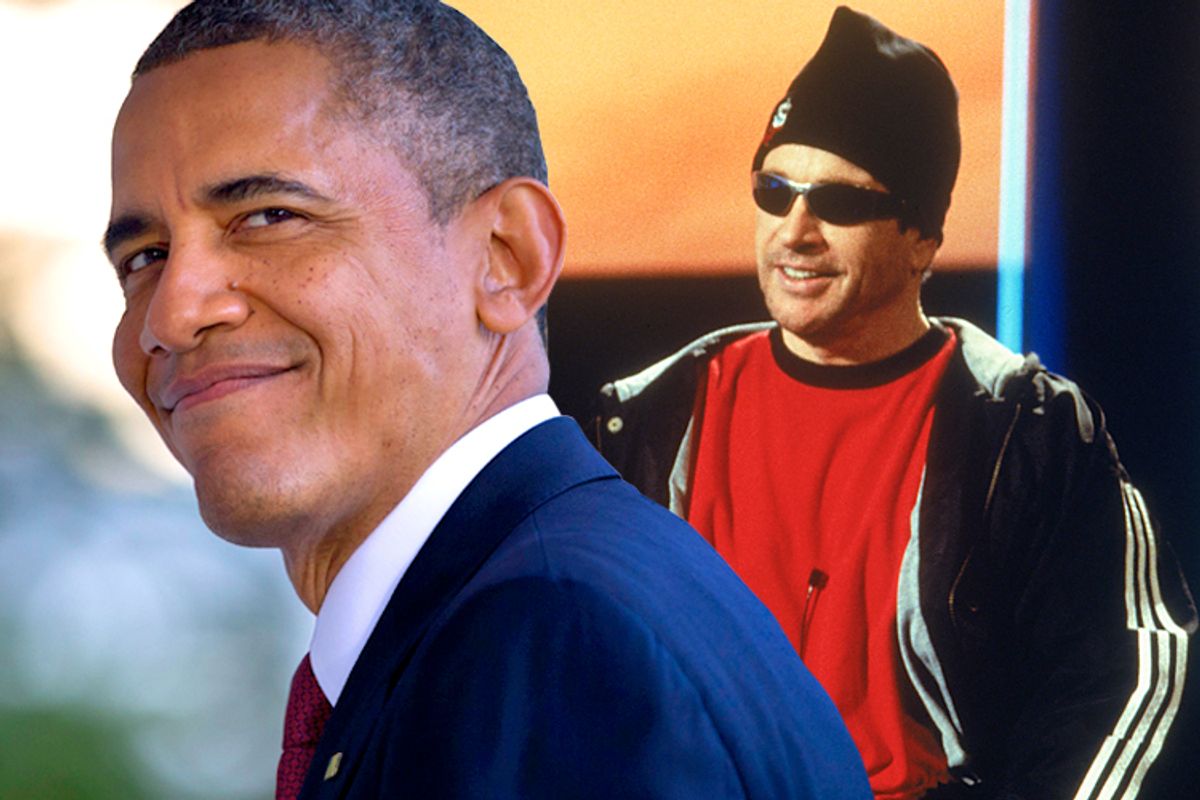 OK, who among us hasn’t wanted to “go Bulworth” from time to time?

The New York Times’ Peter Baker gave us a great gift Thursday morning when he described President Obama  fantasizing about “going Bulworth” in an otherwise-mundane piece about Obama’s current woes. Mired in two faux-scandals – Benghazi and the IRS – and less wounded, but still singed, by the the Department of Justice seizing phone records from the Associated Press in a national security leak probe, Obama is facing predictable criticism from enemies and well-meaning but fairly useless advice from friends about his “leadership,” and Baker rehashes it all.

But the “going Bulworth” revelation jumped out at me – as it did at a lot of folks, from everywhere on the political spectrum. Depending on your memory and your ideology, the 1998 movie -- starring Warren Beatty as an idealistic turned sellout Democratic senator who commits himself to telling the truth about money in politics, and lusting after Halle Berry, once he puts out a contract on his own life -- is a memorable satire of American politics.

Conservatives will no doubt best remember Bulworth’s sex, drugs and support for single payer healthcare (as well as the way he embraces his inner black man, but more on that later). Fuddy-duddys at the Christian Science Montor warn Obama he "would be well-advised to resist the urge to model his behavior after the title character."

I remembered the movie as a bracing portrait of the crisis of the Democratic Party and liberalism in the Clinton era, which came out just after the impeachment fiasco – the very sort of demoralizing, paralyzing, hyper-partisan faux-scandal we’re enduring today. So when I read the Times story, I switched off “Morning Joe” and decided to rent “Bulworth” online. Thanks, Peter Baker! A close look at Bulworth offers a possible glimpse into the president’s personal and political state of mind that’s both encouraging and a little scary.

Of course I’m thrilled that the president who mocked Maureen Dowd for comparing him to “The American President” and Aaron Sorkin fantasies would rather take a page from "Bulworth." Naturally, I have no way of knowing exactly what “going Bulworth” means to Obama, beyond it being a shorthand for telling uncomfortable truths that can’t be told in American politics. "Probably every president says that from time to time," David Axelrod told the Times. "It's probably cathartic just to say it. But the reality is that while you want to be truthful, you want to be straightforward, you also want to be practical about whatever you're saying." Indeed. You don’t want to put out a contract on your own life – or lead a chant of “Socialism!” at a big fundraiser.

So I can only say what “going Bulworth” immediately meant to me. Before I rewatched the movie, I mainly remembered three things: The California senator spoke boldly – and crudely and hilariously -- about the way the Democratic Party had abandoned the poor, and particularly African-Americans, for big money. He delivered a great pro-racial mixing rant (that’s a little naive once you take it apart, but I loved it at the time). And his white guy in the ghetto odyssey was both cringe-making and pretty funny. (A quick aside: The cast is great -- Beatty and Berry plus Oliver Pratt, Don Cheadle, Wendell Pierce, Christina Baranski and, drawing a funny through-line of white politician/black love interest from "Bulworth" through Shonda Rimes' "Scandal," a young Josh Molina.)

But there’s so much that’s relevant to Obama’s predicament that I’d forgotten. The central tension of the film is Bulworth’s decision to back the insurance industry, and oppose a bill that’s described as “making insurance companies sell to poor people.” The young Bulworth would have supported such a measure; the old Bulworth is a sellout paid by big insurance to oppose it – and ready to kill himself.

The film opens with a scene of Bulworth sobbing in his office as he listens to his own saccharine campaign commercials playing over and over. “We stand at the doorstep of a new millennium,” he drones in each one, and then he delivers red meat about opposing welfare and affirmative action, as the camera pans his office and shows pictures of him with Huey Newton and Bobby Kennedy. He hasn’t eaten or slept in days, and that’s when he hatches his plot to sell his vote to the insurance industry in exchange for a  $10 million life insurance policy – and put a hit on himself. We can kind of understand why.

It’s hard not to see "Bulworth" as an attack of sorts on Bill Clinton, who makes cameos in the movie (it’s set during the 1996 campaign) mouthing Democratic Leadership Council platitudes like “We’ve got to balance the federal budget” and “We know big government does not have all the answers.”  Bulworth’s primary opponent calls him “an old liberal wine trying to pour himself into a new conservative bottle,” an apt description of the right’s reaction to Clinton. Indeed, late in the movie we hear Sen. Bob Dole complain that Clinton had merely stolen Republican ideas.

Of course, the most complicated and sometimes troubling way the Democratic Party remade itself had to do with race – and that’s what "Bulworth" is mostly about. Clinton, a civil rights liberal, nevertheless thought he had to get tough on welfare and crime, along with Sista Souljah and Jesse Jackson, to help the party lose the negative association with license, free-spending liberalism and, yes, black people it had acquired thanks to Richard Nixon and Pat Buchanan’s branding efforts. “Bulworth” takes on that legacy of fumbling around on race in ways that are sometimes cartoonish and sometimes brilliant.

Facing death (and dead drunk), Bulworth tries out his new truth-telling persona in a black church in post-industrial, post-Watts, post-Rodney King South Central. When a woman asks why all the money promised after the 1992 King riots never materialized, the senator deadpans, “We all knew that was going to be big news for a while. We told you what you wanted to hear, then we pretty much forgot about it.” The crowd laughs – he’s got to be kidding -- but Bulworth’s truth-offensive continues. A woman asks why he’s blocking the insurance reform bill (the one he sold his vote, and life, for) and he tells her, “You haven’t really contributed to my campaign.” Then he lets loose:

“You can have a billion man march, but if you don’t put down the malt liquor and chicken wings and get behind somebody other than a running back who stabs his wife, you're NEVER gonna get rid of somebody like me!” He then insults a roomful of mostly Jewish entertainment execs by telling them their movies are lousy, that his people “always put the big Jews on my schedule,” and promising that his speechwriter “put something bad about Farrakhan in here for you.” He later complains about having to meet with Catholic “mackerel-snappers.”

But Bulworth’s high point, politically at least, is when he goes to a fundraiser heavy on insurance, oil and banking industry donors, chucks his prepared text and starts “rhyming,” which becomes white-boy rapping. The message is great even if the shtick gets old. Here are some lyrics I hope Obama enjoyed:

Everybody gonna get sick someday / But nobody knows how they gonna pay / Health care, managed care, HMOs / Ain't gonna work, no sir, not those / 'Cause the thing that's the same in every one of these / Is these motherfuckers there, the insurance companies!

You can call it single-payer or Canadian way / Only socialized medicine will ever save the day!

Yo, Bank of America at this table over here/Wells Fargo and Citibank, you´re really very dear/Loan billions to Mexico and never have to fear/´Cause taxpayers, taxpayers take it in the rear

Yes, I’d love to hear Obama “go Bulworth” like that.

To this day, the movie’s interplay of racial and sexual politics make me a little uneasy: Halle Berry is a Magical Negress who can ease Bulworth with a little sexual healing. In fact, you can say the entire black community in the film is magical, taking in the besieged white politician; there’s even a sort of spirit guide played by poet Amiri Baraka. Beatty plays with all kinds of racial stereotyping, sometimes knowingly and maybe sometimes not. We have a lot of sassy, sexed- up black women, including a grandma who cooks a mean pot of greens and talks dirty.

White people, black people, brown people, yellow people, get rid of em all. All we need is a voluntary, free-spirited, open-ended program of procreative racial deconstruction. Everybody just gotta keep fuckin' everybody 'til they're all the same color.

Yet the notion that we can screw our way beyond racism is a little naive, to say the least -- as though race is just a modern hangup rather than an enduring system of political and social hierarchies. And yet Bulworth is on to something, too, and our African-American president with the white mother knows that.

Still, Bulworth’s literal and figurative embrace of black people is the heart of the film, because it reminds us of the way race split the nation, as well as the Democratic Party, in the 1960s, and we still haven’t recovered. For all that Clinton tried to move his party to the center while still trying to work on racial justice and income inequality, he was impeached by increasingly rabid Republicans, and African-Americans forgave him for his racial dodges, becoming Clinton’s staunchest defenders.

Our first actual black president inherited all of that – an uneasy Democratic Party, an increasingly right-wing Republican Party, both of whom sold their souls to the insurance and banking industry. On some level Obama has to know the truths in Bulworth’s rhymes.

Ultimately, the film dispenses with the heavy issues it raises first with silly optimism and then deadly nihilism: Bulworth is rewarded for his bracing truth-telling by getting 71 percent of the vote in his Democratic primary. When he changes out of his ‘hood gear and back into his suit, and convinces Halle Berry to cross over and come with him, we hear the angels sing as they kiss for the cameras. Happy with his new persona, Bulworth managed to call off the hit he’d ordered on himself (I won’t give away how) – but an evil insurance executive guns him down as he’s leaving for his new life with Berry.

I hated the way Bulworth ended so much, given the damage to our psyches done by the assassinations of two Kennedys and Martin Luther King, that I actually forgot how it ended, although I could see it coming near the end.  The film is a microcosm of unhealthy left wing fantasies, bad and good: that bold, progressive truth-telling will lead to landslide wins over corporate Democrats – and also get you killed.

I don’t think Obama took that from the film. But with his administration paralyzed by Republican intransigence, and now by media-abetted scandal, I can see why a movie about a politician busting out of his constraints and telling us the truth would be a comfort. He should try to do more of it.