Who is Jay Carney kidding?

The White House press secretary insists that Obama respects the press, despite a wealth of evidence to the contrary 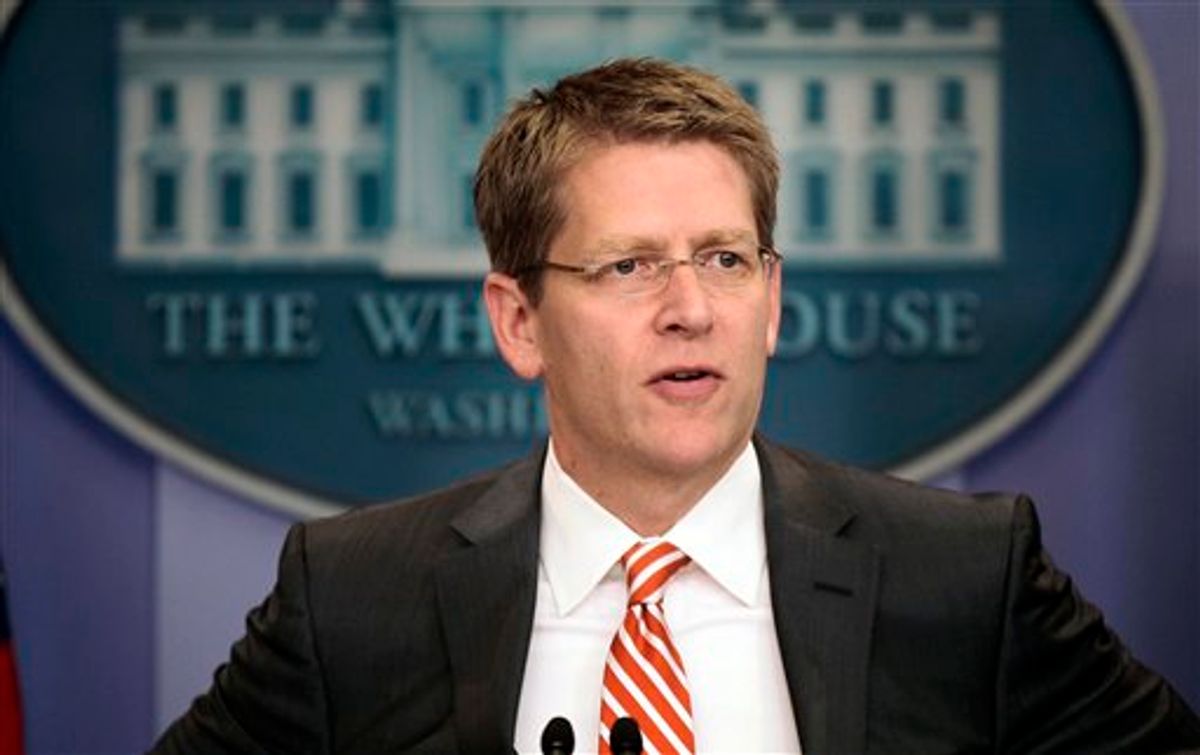 During a press briefing on Tuesday, White House spokesperson Jay Carney mechanically repeated a line when asked about the Justice Department’s seizure of the Associated Press’ phone records, suggesting President Barack Obama supports a “balance” between freedom of the press and national security.

“The president feels strongly that we need a—the press to be able to be unfettered in its pursuit of investigative journalism, and you saw, when he was a senator, the president co-sponsor legislation that would have provided further protections for journalists in this regard,” Carney said. “And he is also mindful of the need for secret and classified information to remain secret and classified in order to protect our national security interests. So there are — there is a careful balance here that must be attained.”

Challenged on whether the administration had actually managed to strike such a balance, a reporter asked, “This administration in the last four years has prosecuted twice as many leakers as every previous administration combined. How does that reflect balance?”

It is hard to imagine a robot giving a much different answer. Carney repeated what he had said, “The president is committed to the press’s ability to pursue information, to defending the First Amendment. He is also, as a citizen and as commander-in-chief, committed to the proposition that we cannot allow classified information to be — that can do harm to our national security interests or to endanger individuals to be — to be leaked. And that is a balance that has to be struck.”

The reporter stated, “But the record of the last four years does not suggest balance.” Carney reacted, “That’s your opinion.”

“No. It’s twice as many prosecutions as all previous administrations combined. That’s not even close,” the reporter replied.

“Well, I — I understand that there — you know, that there are ongoing investigations that preceded this administration,” Carney stated, as if the administration did not have the capacity to quash or abandon those investigations when they took power. The programmed flack for the White House then repeated his line about balance, and also said, “You’re not going to hear him say that it’s OK for the nation’s secrets to be freely reported when that information can endanger our national security and do harm to individuals and endanger individuals.”

“Do you think a fair analysis of this administration’s actions reflect the views you’ve just described?” the reporter asked.

The wily response he gave was, “I believe that the president supports balance and — and that he has made that clear, both as president and within his administration. You know, I — I cannot comment on the specific case, but I can tell you what the president believes in, what his actions have been in the past.” He could talk about Senator Obama, not President Barack Obama, because when he was a senator, he was not a commander-in-chief, someone who would find the compulsion to serve the national security state impossible to resist.

The Obama administration has not maintained any kind of a reasonable balance. The framing by the administration, where it is suggested that freedom must be balanced against national security interests, is not only a false choice but also a tension sustained to give the administration cover as it expands and claims new powers.

In exhibiting a disdain for the free flow of information, the administration has targeted a record number of alleged leakers or whistle-blowers. It prosecuted former CIA officer John Kiriakou, who is now serving a 30-month jail sentence for providing the name of someone involved in the CIA’s rendition, detention and interrogation (RDI) program to a reporter. It pursued former NSA employee Thomas Drake, who provided details on fraud, waste, abuse and illegality to a Baltimore Sun reporter. It put former FBI linguist Shamai Leibowitz in prison for 20 months for providing a “blogger” documents on a possible Israeli strike on Iran.

The administration investigated and prosecuted former State Department arms expert Stephen Kim for sharing information with Fox News reporter James Rosen on how North Korea might respond to criticism of its nuclear program. It has pursued an innovative and relentless prosecution against Pfc. Bradley Manning, who has confessed to disclosing classified and overclassified information to WikiLeaks. It continued an investigation into Justice Department lawyer Thomas Tamm, who provided details on warrantless wiretapping under President George W. Bush’s administration to Eric Lichtblau of the New York Times, until finally dropping the case in 2011. And, it has prosecuted former CIA officer Jeffrey Sterling, who was charged with providing information with New York Times reporter James Risen on an operation that might have led to Iran getting information on how to build a nuclear bomb.

The Justice Department under Obama has also targeted Risen in the Sterling case, arguing he does not have a right to claim reporters’ privilege and must divulge not only his sources of classified information but also for information “neither confidential or privileged.” According to the Reporters Committee for Freedom of the Press, Risen has “faced three subpoenas in three years and has successfully invoked the First Amendment-based reporter’s privilege to refuse to testify at both the grand jury and trial stages of the federal prosecution.” Yet, the Justice Department has insisted on continuing its pursuit against him and, after argument before a federal appeals court in May 2012, Risen is awaiting a decision on whether he will have to reveal confidential sources and other information he managed to obtain while engaged in news reporting.

Drake, Kim, Kiriakou, Leibowitz, Manning and Sterling were each indicted under the Espionage Act—a World War I-era law intended to go after spies  and not government employees who leak information.

“Any time you prosecute someone for leaking it’s going to chill news sources and that investigation was launched to find the people who leaked,” former senior advisor to Obama David Axelrod acknowledged on MSNBC’s “Morning Joe” on May 15. That is exactly what has happened in each of these cases.

Such zealous pursuits of alleged leakers or whistle-blowers has not been solely responsible for creating a climate that chills national security journalism. As the AP reported this year, though the “Obama administration answered more requests from the public to see government records under the Freedom of Information Act last year,” more than ever it is now citing “legal exceptions to censor or withhold the material” in order to “protect national security and internal deliberations.” It cited “national security to withhold information at least 5,223 times—a jump from over 4,243 such cases in 2011 and 3,805 cases in Obama’s first year in office.”

The Obama administration has presided over a Justice Department that has empaneled a secret grand jury to investigate the media organization WikiLeaks for publishing classified information. It has subpoenaed personal data from the email and social media accounts of individuals linked to the organization, who worked on the release of the “Collateral Murder” video that showed a 2007 Apache helicopter attack that killed two Reuters employees and a “Good Samaritan,” who pulled up in a van to help the wounded employees.

The administration passed a Whistleblower Protection Enhancement Act that did not extend to national security whistle-blowers. When Obama issued a directive to extend “whistleblower protections to the intelligence and national security communities,” it was toothless, with no legal enforcement mechanism that could meaningfully protect an individual from government retaliation.

A proposed federal media shield law the administration negotiated in 2009 died in Congress but not before a national security exception was carved into it to reduce the scope of protection for reporters. (Legislation has been reintroduced and will likely have this broad exception in it again.)

Recently, as former State Department employee Peter van Buren, who was forced out of the State Department for publishing a book on the corrupt “reconstruction” of Iraq, highlighted, the administration is seeking to expand the definition of “national security worker” to include “thousands of additional federal employees,” who do not even hold security clearances. Obama, in an effort that would limit the rights of workers, is “functionally moving to shrink the pool of potential whistleblowers.”

Van Buren also calls attention to the case of a federal air marshal, Robert MacLean, who went on TV in disguise in 2004 and criticized the “TSA dress code and its special boarding policies, which he believed allowed marshals to be easily identified by other passengers.” The government retroactively classified a message that was unclassified so they could fire and prosecute him.

“What happens with MacLean’s case potentially affects every future whistleblower,” Van Buren argued. “If the mere presence of a pseudo-classification on an item, even applied retroactively, negates whistleblower protections, it means dark days ahead for the right of the citizenry to know what the government is doing (or how it’s misbehaving) in its name. If so, no act of whistleblowing could be considered protected, since all the government would have to do to unprotect it is classify whatever was disclosed retroactively and wash its hands of the miscreant. Federal employees, not a risk-taking bunch to begin with, will react accordingly.”

Attorney General Eric Holder and the Justice Department refuse to inform the Times about whether they have been targeted like the AP, since they published information on Stuxnet. Plus, Holder is “not sure” how many times he has signed off on the seizure of journalists’ records, which is not all that comforting to say the least.

Some of the above may seem disconnected from freedom of the press; however, it all has profound implications for news media, as this shrinks the pool of possible sources for journalists. Government employees get the message that they have no free speech rights while working in government and, if they dare to test the government, they will be fired and the Justice Department will craft a criminal case. Fostering such a culture among employees is effective in deterring an employee from returning the calls or emails of reporters, who actually seek the truth and do not simply settle for official talking points from government spokespeople.

Confidential news sources are how the public has found out about warrantless wiretapping, torture tactics used against detainees, CIA secret prisons, abuse and torture at Abu Ghraib, plans the government had for a “neutron bomb” under President Jimmy Carter and, initially, the Pentagon Papers were provided by a confidential source.

Washington Post reporter Dana Priest, who uncovered details on CIA secret prisons, has said, because “the US government has made secret nearly every aspect of its counterterrorism program, it would have been impossible to report on the basic contours of [the government's] decisions, operations and programs without the help of confidential sources.” But, this is exactly the kind of information the Obama administration wishes to suppress, as evidenced by its sanctioning of leaks investigations into the publishing of information on the secret “kill list,” cyber warfare against Iran (Stuxnet) and the CIA underwear bomb plot sting operation in Yemen.

There simply is no way to take claims by this administration that it has “balanced” the ability of reporters to engage in “unfettered” investigative journalism with national security interests seriously. Every decision or policy has favored so-called national security over the First Amendment. And, only someone with a stake in defending this president’s reputation from critics would think differently.