Cornel West: "You can get killed out here trying to tell the truth!" 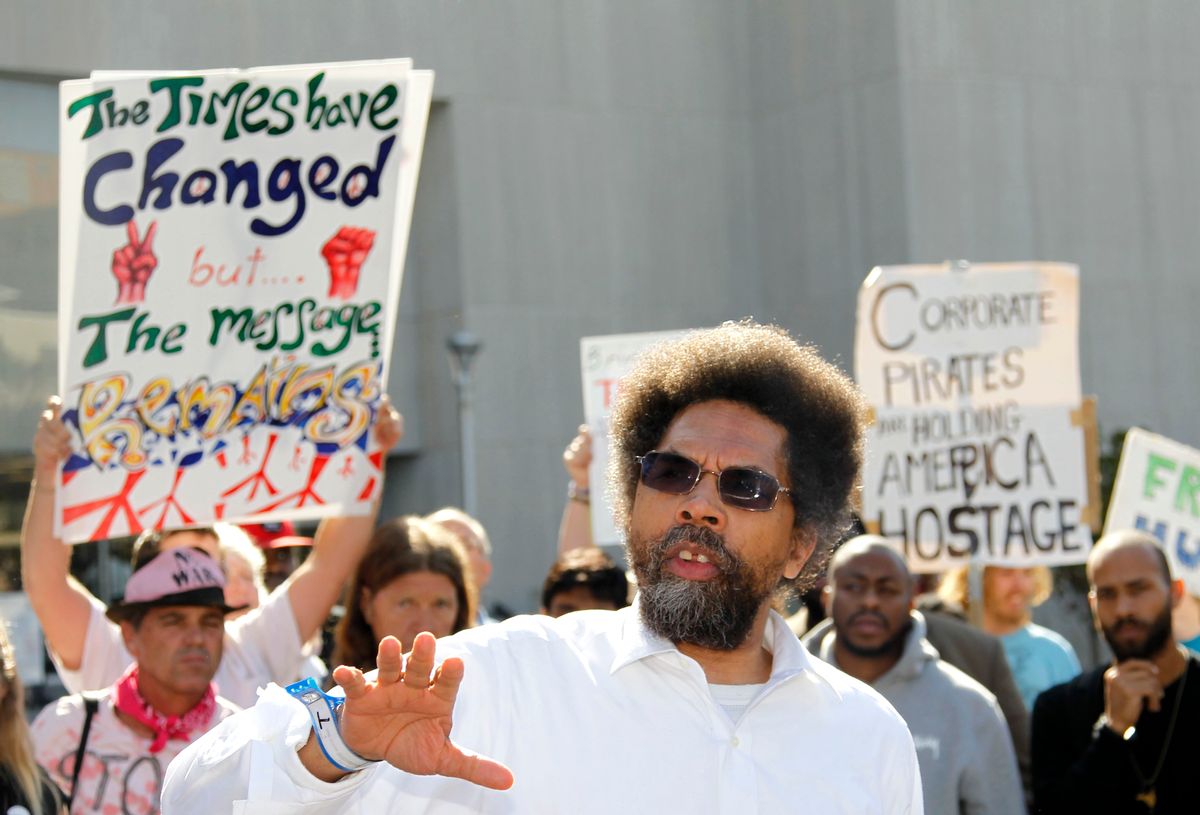 As big banks and corporations grab more power and government heightens control and surveillance, confronting those at the top is getting to be a dangerous proposition. As Cornel West put it bluntly, “You can get killed out here trying to tell the truth.”

For the last year, a partnership between the Institute for New Economic Thinking (INET), a New York–based think tank, and Union Theological Seminary (UTS) has produced a series of rich conversations about economics, society and the human spirit. Tuesday night, West and INET Executive Director Robert Johnson sat down together in a packed chapel at UTS in New York to talk about the pain caused by financial predators and the frightening trend of creeping authoritarianism. Union Theological Seminary president Dr. Serene Jones moderated a discussion which ranged from love to finance to the economics of Jesus.

Johnson, who had recently led a meeting of major financial executives in London, noted that the Big Boys are aware that they are no longer gods in the public view, but demons.  “They are scared,” said Johnson. But that doesn’t seem to have curbed much of their predatory behavior, so the question of how to change their ways remains urgent. “Do you create institutions to constrain sinful, greedy, avaricious and delusional individuals?” asked the economist. “Or do you, like the Buddhists suggest, seek to change that greedy, aggressive, delusion character …?” West and Jones quickly answered “both,” but Johnson said he’s leaning toward the Buddhists on this one. Multinational corporations, he warned, are so “large, sophisticated, and capable” that the regulators simply can’t keep up. You have to “get inside the hearts” of these leaders, he argued, and somehow create a sense of moral accountability -- a process that Johnson believed would be both difficult and painful. He likened it to the shattering soul-searching of a blues musician. (Johnson, in addition to being an economist, has worked in the music industry.)

West cited the need for a “democratic counterweight” against what he described as three dominant tendencies on the globe: “financializing, privatizing and militarizing.”  He warned that as long as we’re stuck with an “empty” and “shallow” public sphere that has been “colonized” by the “oligarchs at the top,” we’re most certainly headed towards fascism. West remarked that the assassination of citizens without due process and other recent trends paint a grim picture of the effectiveness of our institutions. “It’s devoid of legitimacy,” agreed Johnson.

West sent a powerful message about governments harassing and exerting control over citizens. The Associated Press, he noted, is “as mainstream as red apples,” and yet its reporters and editors have been under surveillance by the Department of Justice, as recent revelations have made clear. “Can you imagine what you and I are under?” he asked.  “You can get killed out here trying to tell the truth!” West warned.

The evening was filled with lively back-and-forth on the threats to human dignity and a just society caused by perverted economic thinking.  Treat yourself to the full discussion below (Note: Due to a technical glitch, the sound comes on at 3.42 in Part 1):