Kinsley loves austerity because it is "spinach" 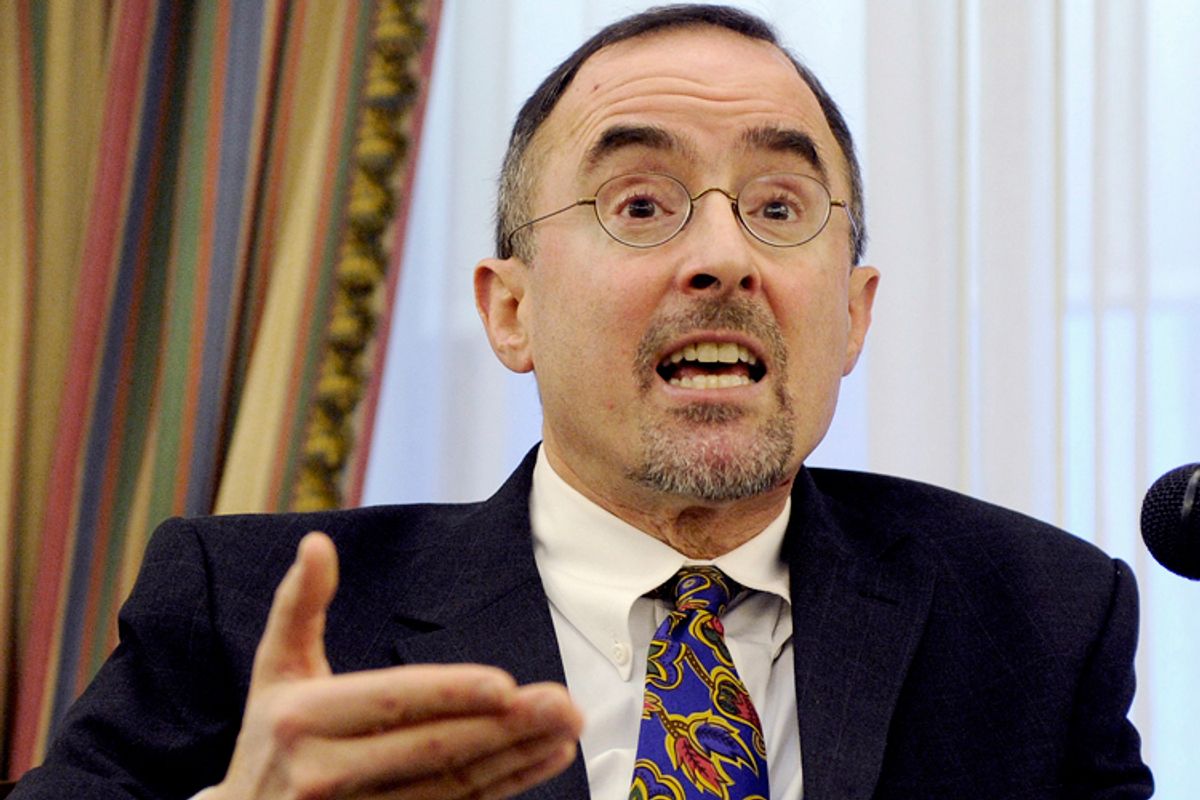 So the other day Paul Krugman had a long, very good piece in the New York Review of Books on the arguments and flawed research used to justify austerity measures, and why the notion that it's necessary for countries to "pay" for booms and expansionary fiscal policy with spending-slashing measures in the midst of recessions has so much appeal to certain elites. And in this month's New Republic, former editor Michael Kinsley responds to Krugman's anti-austerity crusade with a very poorly argued piece about how even though austerity has been a disaster basically everywhere, austerity is still a Good Thing because we Deserve It.

Kinsey's column sort of cheerfully mocks, in the Kinsleyan fashion, the dark warnings of "anti-austerians" like Krugman. He cheerfully quotes a series of statistics showing how miserable the recent economic crisis has been for Americans, and people around the world, and says, yes, recessions lead to death and austerity worsens recessions but it's worth it because "Austerians believe, sincerely, that their path is the quicker one to prosperity in the longer run." And Kinsley seems to accept that belief as true.

Kinsley is a fine writer and he is also a man who has clung, his entire (lengthy, storied) career to a certain kind of New Republic-y aversion to Rooseveltian New Deal liberalism. Here is one key line in his confused argument:

For conservatives and neoliberals it is always the '70s all over again, when (in their mind) Keynesianism was proven wrong forever, and Paul Volcker was called a hero because he intentionally caused a miserable recession in order to whip inflation/end the era of full employment as a Fed goal. Kinsley's "lesson" here is that "stimulus is addictive" or something, which, no, Mike, that is not the "lesson" of stagflation, and also there is not actually any inflation happening now, by the way.

So, Krugman forgot about the '70s and also is not bravely telling Americans that they can no longer afford to party, Kinsley says:

Krugman sometimes writes as if, right or wrong, his view is the courageous one, held by folks willing to stand up to the plutocrats and their lackies. But his message to all classes is: party on. It’s your patriotic duty. How much courage does that take? The really tough message—once again, right or wrong—is the one the austerians have to deliver, which is that the party is over.

The best part of this sort of language about government spending -- or, more accurately, about the government issuing bonds -- is that it makes being working- and middle-class sound so much fun. Did you know it's been a party, these last few decades? And Paul Krugman, irresponsibly, wants everyone to continue partying. What is wrong with that? It's here that Kinsley reveals himself to be a member of the Scarborough school, the sorts of longtime Important Beltway Men who are simply pretty sure that austerity is superior to all alternatives because the government's been making it too easy and comfortable for the rabble over the last generation or so. And as we all know after a party you have to starve yourself to death to atone.

This is the line everyone's been quoting (and with good reason):

I don’t think suffering is good, but I do believe that we have to pay a price for past sins, and the longer we put it off, the higher the price will be.

I dunno, maybe an editor should've looked at that? It basically says "I don't believe suffering is good but I do believe we deserve to suffer." The editor should've also added a note explaining that Michael Kinsley turned into Joe Scarborough on his way back to his home planet.

It is hugely embarrassing on a number of levels that this is the last line of Kinsley's column: "They at least are talking about the spinach, while the Krugmanites are only talking about dessert." First of all, spinach is actually pretty good if it's prepared well. Maybe instead of "spinach" the metaphor for austerity should be "poison." "We need to eat our poison to make up for how much cake we had before" is the austerian argument, more accurately put.

Second of all, the "we need our medicine" line always -- literally always -- actually means you need your medicine. One reason austerity has been so popular (and Krugman says this as well) is that its effects don't harm the rich. The economy sucking sometimes means rich people might be getting less richer than they would otherwise, but the last few years have also seen a surging stock market and record corporate profits. Even Matt Yglesias, Slate's foremost foe of workplace safety standards, is on the side of the proles on this one.

Michael Kinsley's attraction to punitive economic policy is basically a tic. It's a holdover from the days when it looked like liberalism Wasn't Working and New Liberals with a bunch of crazy counter-intuitive conservative ideas were thought to be much more entertaining. It's the tic that allowed him to succeed in the conservatism-ascendant world of Reagan-era Big Ideas magazines, but at this point it is a weird anachronism, like bow ties or post-9/11 straight manly men homophiliac fixations on Donald Rumsfeld.

Meanwhile, it's been fun, over the last decade or two, to watch Paul Krugman be radicalized by his opponents. This is a longtime globalization advocate who was hired, by the Times, presumably to write a column based mainly on economics, along the lines of his old Slate columns where he'd explain Japan with ticket scalping analogies and so on. Instead they got this angry fulminating liberal truth-crusader.

And this wonderful new Krugman even occasionally sounds very slightly like Doug Henwood. From his NYRB essay:

So is the austerian impulse all a matter of psychology? No, there’s also a fair bit of self-interest involved. As many observers have noted, the turn away from fiscal and monetary stimulus can be interpreted, if you like, as giving creditors priority over workers.

Yesterday, he approvingly cited Naomi Klein. The significance of that can't quite be overstated, if you, in the words of BuzzFeed, Remember the '90s. Krugman was (is!) a globalization advocate mainstream economist. Klein is one of the foremost voices of the '90s anti-globalization movement. It turns out they can share a side of the great American political divide without driving each other crazy:

What [Noah] Smith didn’t note, somewhat surprisingly, is that his argument is very close to Naomi Klein’s Shock Doctrine, with its argument that elites systematically exploit disasters to push through neoliberal policies even if these policies are essentially irrelevant to the sources of disaster. I have to admit that I was predisposed to dislike Klein’s book when it came out, probably out of professional turf-defending and whatever — but her thesis really helps explain a lot about what’s going on in Europe in particular.