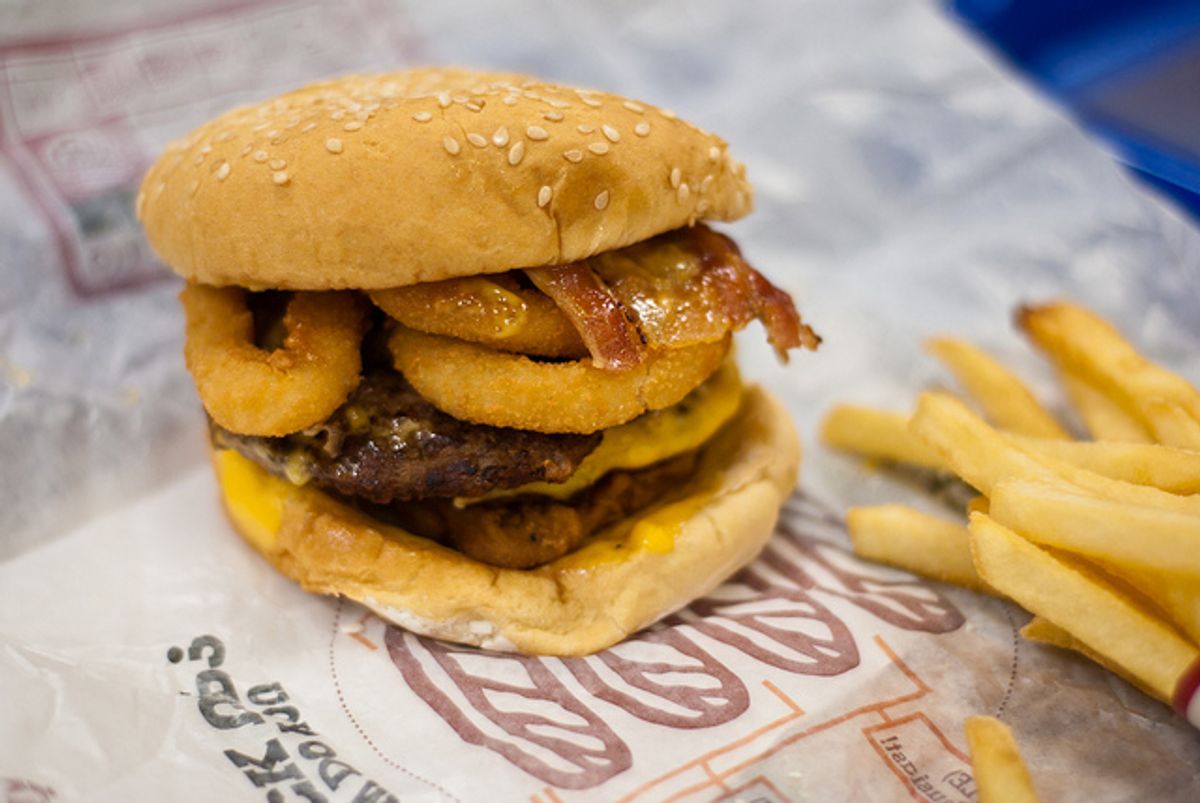 Was Jose Navarro, a federal poultry inspector who died two years ago at the age of 37, a victim of increasingly noxious chemicals used in poultry and meat production? Chemicals like ammonia, chlorine and peracetic acid that are frequently employed to kill aggressive bacteria in meat and poultry?

Navarro coughed up blood several months before his death, the Washington Post reported last week, and he died in November 2011 of lung and kidney failure, according to the autopsy report. An OSHA inspector during a subsequent investigation said “the combination of disinfectants and other chemicals” in addition to pathogens such as salmonella “could be causing significant health problems for processing-plant occupants,” reports the Post. The plant where Navarro worked and the chicken industry defend the chemicals as safe.

It is no secret that new methods are being used in the war against bacteria because of the antibiotic resistance the meat industry's widespread reliance on antibiotics has helped cause. Antibiotics save money for livestock operations in two ways: they keep the animals alive in filthy, packed conditions in which they might otherwise die; and they make animals gain weight with less food because of their metabolic effects.

Despite the routine use of antibiotics in livestock operations, bacteria and resistant bacteria are rampant in the food supply. Almost half of US beef, chicken, pork and turkey contained staph bacteria when they were tested, reported the Los Angeles Times in 2011--including the resistant MRSA bacterium (methicillin-resistant S. aureus). Two serious strains of antibiotic-resistant salmonella, Salmonella Heidelberg and Salmonella Hadar, forced recalls in recent years of turkey products from Jennie-O Turkey and Cargill. The resistant salmonella strains were so deadly, officials warned that disposed meat should be placed in sealed garbage cans to protect wildlife.

But there is another reason that stronger and more volatile chemicals are being used. The federal government is increasingly washing its hands, pun intended, of slaughterhouse inspection and encouraging industry "self-regulation," which is cheaper for both sides. Thanks to the new era of food industry laissez-faire, assembly lines are moving even more quickly--if that's possible--and more aggressive chemicals are being employed. "Pink Slime" treated with puffs of ammonia to kill E. coli, was only one example of extreme chemicals routinely used to kill germs, often under the public's radar.

There is also an ongoing battle between US trade officials and the European Union and Russia over US poultry because it is dipped in chlorine bleach to kill germs. Who knew? And conventional US poultry is often grown on feed that contains arsenic, which the FDA says is used to control parasites, promote weight gain and feed efficiency and improve “pigmentation.” In 2011, Pﬁzer announced it would stop selling arsenic-treated chicken feed after the FDA found residues in chicken livers and most people assumed the substance had been retired from poultry farms. Guess again. Histostat, or nitarsone, another arsenic-based feed additive, is still on the market, reports the New York Times.

Over the years, reports about the deleterious effects of self-regulating agribusinesses on animals, workers, the environment and consumers who eat the products have made headlines. But increasingly, federal meat inspectors are speaking out about the broken system.

“My plant in Pennsylvania processed 1,800 cows a day, 220 per hour,” and veterinarians were pressured “to look the other way” when violations happened," Lester Friedlander, a federal meat inspector told the Winnipeg Free Press. The reason? Stopping "the line" cost the plant about $5,000 a minute. Friedlander was a USDA veterinarian for 10 years and trained other federal veterinarians.

When mad cow disease was first a US threat in 1991, Friedlander says a USDA ofﬁcial told him not to say anything if he ever discovered a case and said he knew of cows who had tested positive at private laboratories but were ruled negative by the USDA. Friedlander told United Press International that the USDA attempted to force him out after he alleged, on national TV, that meat from downer cows supplied the national school lunch program. His charge proved true, and led to the biggest meat recall in US history.

National Joint Council of Food Inspection Locals, the union that represents meat and poultry inspectors in federally regulated slaughterhouses, also spoke out about mad cow disease risks. In a letter to the USDA in 2004, the union said that cattle parts that could give humans the disease were “being allowed into the production chain.” Heads and carcasses of cattle over 30 months old sailed through slaughter and processing lines, said the whistle-blowing inspectors. “We couldn’t determine that every part out of there was from a cow under 30 months,” said Stan Painter, the union’s chairman, to MSNBC. “There was no way to determine which one was which.” Inspectors were “told not to intervene” when kidneys from older animals were sent down the line to be packed for the Mexican market, which prohibited cows over 30 months, the union charged. Cows younger than 30 months were considered to pose less mad cow disease risk to humans.

Food Safety and Inspection Service (FSIS) inspectors in the Department of Agriculture have traditionally been responsible for a plant’s compliance with the Federal Meat Inspection Act (or Poultry Products Inspection Act or the Egg Products Inspection Acts) and the Humane Methods of Slaughter Act but the balance of power is switching to self-regulation. A turning point was the implementation of the Hazard Analysis and Critical Control Points (HACCP) inspection system in 2000 which replaced inspectors' visual examination of carcasses with inspectors simply ratifying that companies are following their own self-created systems--as in "trust me."

The HACCP system was developed by former Monsanto lobbyist Michael Taylor, which is no surprise in light of his pro-industry initiatives while working at the government. Taylor facilitated the approval of unlabeled GMO crops and recombinant bovine growth hormone (rBGH), both spearheaded by Monsanto, and has even lobbied against the Delaney Clause, which prohibits cancer-causing chemicals in food.

Food activists, animal activists, consumers and even industry insiders called HACCP "Have a Cup of Coffee and Pray" and an unvarnished gift to industry. It's a “politically based policy masquerading as a science-based measure” that privatizes the meat inspection process for large plants while regulating smaller plants out of business. It allows contaminated meat to leave the plant with “smaller downstream processors . . .left accountable for problems caused by the original slaughterhouses,” writes Nicole Johnson.

Soon after HACCP was implemented, a study by the Government Accountability Project and Public Citizen found that 62 percent of inspectors surveyed allowed contamination like feces, vomit and metal shards in food under HACCP on a daily or weekly basis, which had never happened before. Almost 20 percent of inspectors said they’d been instructed not to document violations. In fact, a full 80 percent of 451 inspectors surveyed said that HACCP attenuated their ability to enforce the law and the public’s right to know about food safety.

Another federal meat inspector who spoke out about the broken system was veterinarian Dean Wyatt. The Food Safety and Inspection Service supervisory public health veterinarian from Williston, VT testified at congressional hearings in 2010 about federal inspectors' shocking lack of authority in slaughter plants. Plant managers openly defied the federal inspectors he said, and workers followed suit, actually ridiculing them.

Both Wyatt and public health veterinarian Deena Gregory reported that they witnessed a Seaboard employee hit an, "animal hard in the face and nose 8-12 times," but David Ganzel, the District Veterinary Medical Specialist, deemed the acts was not "egregious," hence not a violation, said Wyatt in his congressional testimony. Seaboard employees began to snicker when Wyatt walked past.

Food Safety and Inspection Service officials overtly served plant managers not the government, food consumers, employees or the animals. Wyatt was instructed not to file violation reports--not to do his job--and official reports were sanitized and deleted. In one report of an employee abusively throwing an animal, the word “threw” was changed to “dropped” he testified.

Shortly after testifying to Congress in 2010, Dean Wyatt died of brain cancer at the age of 59. He was a second-generation federal meat inspector and told Congress that, “Public service is in my blood.” His father died in the “line of duty,” he said, contracting a lethal pathogen at a turkey slaughter plant he inspected.