Can playing Dots on your iPhone make you smarter?

Not quite, but new research reveals that the game and others like it can sharpen a few specific cognitive skills 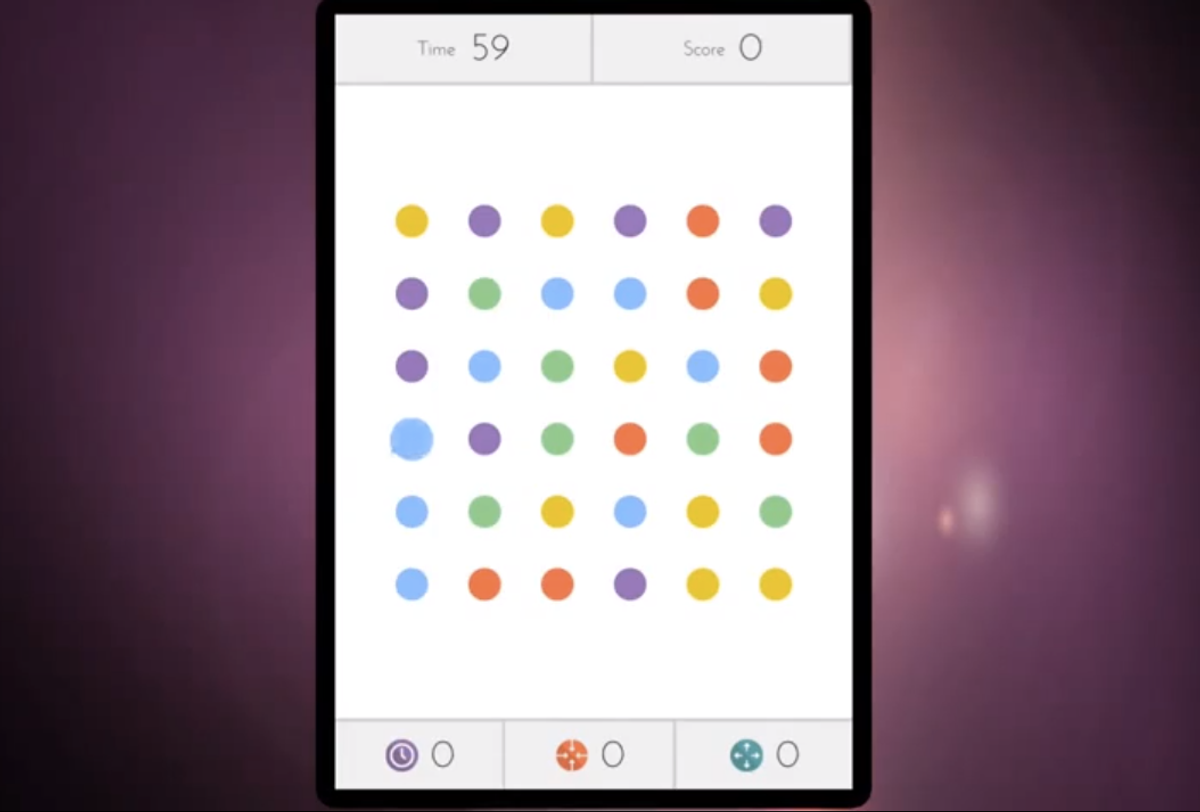 I have an addiction. It’s not to drugs or alcohol, jumping out of airplanes, or even sex. My addiction is to a grid of 36 dots—and to making them disappear as quickly as possible.

If you own an iPhone or have a friend who does, you’ve probably heard some version of this admission before. The grid is Dots, a super-addictive iOS game released by New York tech incubator Betaworks just over two weeks ago. Dots was downloaded one million times in the first few days after its release, becoming the top app in eight different countries; users completed 25 million rounds in the first week. After just two weeks, users had racked up more than 100 million rounds. That adds up to 190 years of gameplay.

Part of Dots’ addictiveness is its simplicity. You start with a six-by-six grid of multi-colored dots on a flat white background. Players connect dots of like color to remove them from the board and score points, which can be cashed in for various perks. Connecting a square for four or more dots will eliminate every dot of that color from the board. At Quartz, Zach Seward’s handy guide boils the game’s winning strategy down to one simple mantra: “Make squares. Just make them. There is no other Dots strategy.”

The addictiveness of Dots is troubling. The desire to play yields perhaps one too many breaks from work (this article took twice as long to write as it should have because I kept stopping to play rounds “for research”). Those 190 years of gameplay, if done during work hours, shake out to a little more than $12 million in lost wages—and that’s just if you’re working off the $7.25 minimum wage the U.S. government set in July 2009. Staring at a screen all day can cause vision problems, so much so that the Vision Council recommends “eye-gonomics” for office workers to avoid “digital eye strain.”

The good news is that my Dots addiction may come with some added cognitive perks. Casual games like Dots—video games that are quick to access, easy to learn, and require no special game skills (a category that includes many other smartphone games, like Bejeweled and Peggle)—were subject to a study on gaming and cognitive ability conducted by East Carolina University’s (ECU) Psychophysiology Lab in 2010. The study, conducted with dozens of U.S. consumers, was designed to explore the effects of casual games on subjects’ short-term cognitive acuity, including cognitive response time (how quickly a subject completes a task) and executive function (how often a subject completes a task correctly). Subjects who played Bejeweled and similar games for 30-minute periods showed an 87 percent improvement in cognitive response time and a 215 percent increase in executive functioning when compared to a control group.

These cognitive gains should not be interpreted as making gamers “smarter,” per se. Shortly after ECU published their study, the BBC and Nature found that brain training software like Nintendo’s Brain Age doesn’t really improve your reasoning, memory, or problem solving in the long run, and any gains wrought from incessant gameplay are confined to the specific types of tasks required by a game. The six-week online study, which involved 11,430 participants trained several times each week on cognitive tasks designed to improve reasoning, memory, planning, and attention, found that whatever skills players picked up were not immediately transferable to unfamiliar tasks.

More recent research confirms that cognitive perks picked up from gaming are skill-specific and not general gains in intelligence. According to research published in open access journal PLOS ONE by Adam Chie-Ming Oei and Michael Patterson of Nanyang Technological University-Singapore, playing video games for an hour each day can improve subsequent performance on cognitive tasks that use similar mental processes to those required in a specific game.

The researchers had non-gamer participants play five different games on their smartphones for an hour a day, five days of the week, for one month. Each participant was assigned one game with different styles of gameplay, from the typical action games to pattern-recognition challenges like Bejeweled, a popular Android smartphone game which has similar rules and objectives to Dots. After one month, researchers found that participants showed significant improvement in the type of cognitive skills required for their specific game: players who were assigned the action game had improved their capacity to track multiple objects in a short span of time, while spatial memory and pattern-recognition game players improved their performance on visual search tasks.

Playing casual games like Dots and Bejeweled are the cognitive equivalent of working out a single muscle: you strengthen a very specific skill without necessarily improving your overall mental dexterity. But if you’re like me and concerned about your addiction, this news may still come as some comfort: you may be giving up hours of your life, but at least you’re getting very good at making a bunch of colored dots disappear.