Mikki, a chimpanzee from the Moscow Circus, is renowned for his Polaroid photography 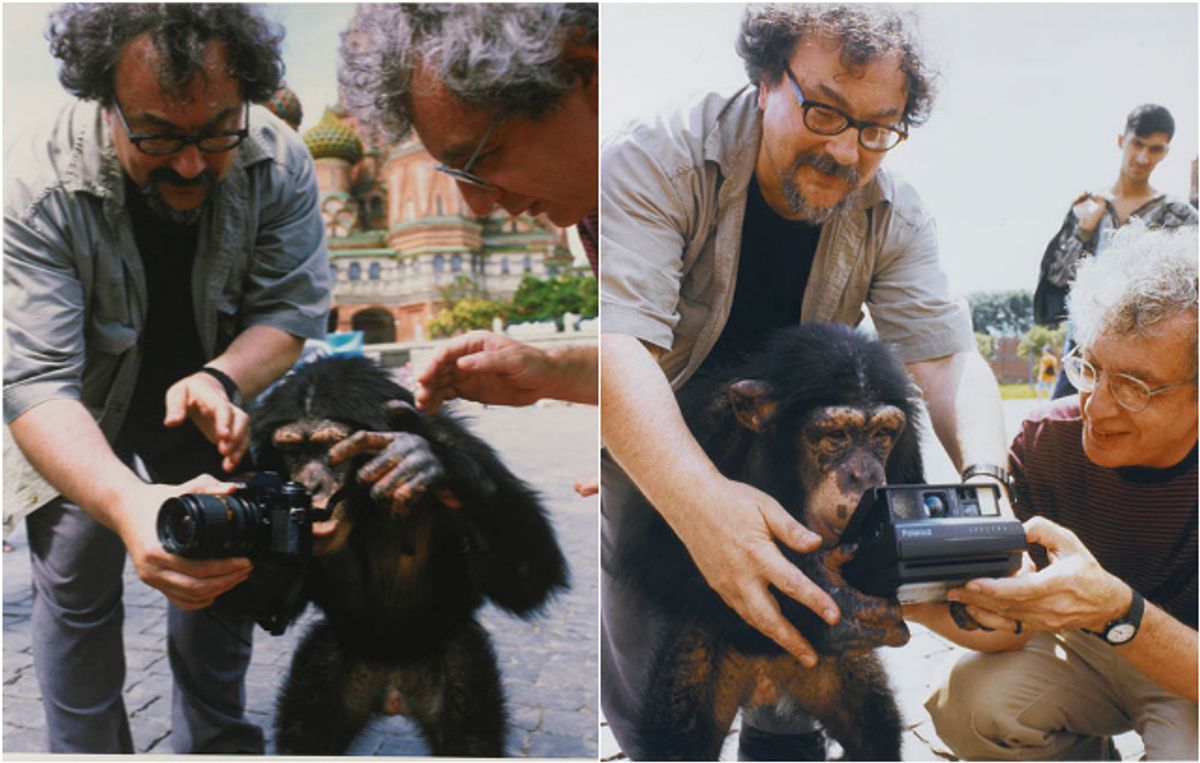 While staggering auction record peaks were summited this week by some talented human artists, a more amateur representative of an underrepresented artist species is expected to gain some auction attention of his own. Photographs by Mikki the chimpanzee that show blurry views of Moscow are estimated to fetch between $75,000 and 100,000 at Sotheby’s.

The lot of 18 photographs is part of the June 5 “Changing Focus — A Collection of Russian and Eastern European Contemporary Photography” auction in London. They include both Mikki’s clarity-challenged captures of Moscow’s Red Square and other city sights, as well as documentation of Mikki learning to use a polaroid, analogue, and antique large-format camera with Russian-born American conceptual artists Vitaly Komar and Alexander Melamid. Called “Our Moscow Through the Eyes of Mikki,” the 1998 collaboration between human and simian was part of Komar and Melamid’s broader ongoing project of collaborating with animals. Back in 1987, they worked with a a dog named Tranda to “draw” with paw prints canine-friendly subjects like the outline of a bone, and in 1995 they painted busts of George Washington with an elephant named Rene at the Toledo Zoo in Ohio. They even tried out gnawed wood sculptures with with beavers in 1998.

Komar and Melamid reportedly first encountered the chimpanzee Mikki at the Moscow Circus, according to Metro. While chimpanzees have similar vision to humans, including bifocal sight, depth perception, and distinguishing the variations in colors, it’s hard to say whether Mikki could really conceive of the idea of capturing what was before him with these strange devices. However,  Suad Garayeva, the curator of contemporary art at Sotheby’s, told Metro that “Mikki got quite excited with the results.” These results, the fuzzy views of the spires and people of Russia, may not have much in the way of control, but there are plenty of surprising angles and a dislocation from the expected in their frames.

Below are a few of Mikki’s shots up for auction.

A blurry Moscow view by Mikki

An interesting capture of light in one of Mikki’s photographs

A long exposure of the sky and Moscow architecture by Mikki

Photographs from Vitaly Komar and Alexander Melamid’s “Our Moscow Through the Eyes of Mikki” are up for auction in ”Changing Focus – A Collection of Russian and Eastern European Contemporary Photography” on June 5 at Sotheby’s in London.