I didn't think twice about taking out a five-figure loan. Then I graduated with no money -- and no job prospects 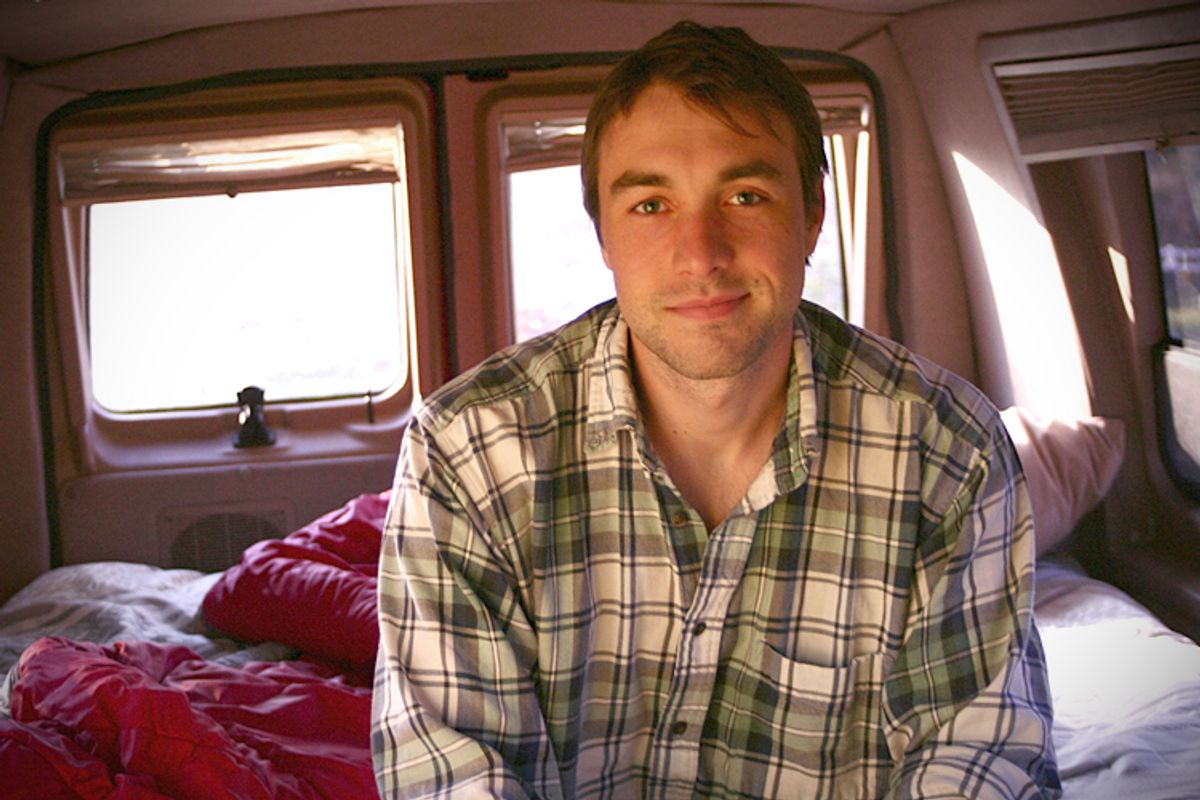 Photograph of the author
--

Excerpted from "Walden on Wheels".

It all began in August 2001, when I decided to participate in one of the great annual migrations known to man: alongside millions of fellow eighteen-year-old Americans, I had graduated from high school and was going to college.

My high school class and I moved like a school of fish: we graduates were capable of going off on our own, in whatever direction we chose, but something demanded we all swim as one, curving, cutting, sashaying together, wiggling our way to college. Except for a few miscreants, we all ended up in college.

In high school, if someone asked me what my “plans” were, I’d click into brainwashed robot mode: my body would become rigid, my pupils would dilate, and in a monotone, I’d recite, “I-will-go-to-the-best-college-I-can-get-into. No-matter-the-cost.” At some point, I’d convinced myself that going to college was what I really wanted to do. So I went to Alfred University, a pricey private college in southern New York. My first year at Alfred would cost me $18,450. Later, I would transfer to a cheaper state school, and my total price tag for higher education: $32,000.

It didn’t occur to me to think about how strange it was that the government, my college, and a large bank were letting me,  an eighteen-year-old kid — one who didn’t know what “interest” was (or how to work the stove for that matter) — take out a gigantic five-digit loan that might substantially alter the course of my life.

Taking out student loans was a momentous event in my life, yet I don’t have the faintest recollection of the event. I know it happened because I definitely went into debt, but I don’t at all remember signing any forms, shaking any hands with financial aid officers, or noting the frown that was surely fixed on my mom’s face as she cosigned the loans with me — which was, by he way, probably a daunting prospect to her, as I’d given her no indication that I’d one day exhibit traits of industry, ambition, or responsibility.

I do not remember hearing any warnings about the consequences of debt or the likelihood of a bleak post-graduation job market. And I do remember hearing, from a chorus of voices, that “student debt is good debt” and that “money shouldn’t stop you from going to the school you want to go to.”

I told myself that incurring student debt was like puberty or a midlife crisis: It was an unavoidable nuisance, a ticket required for admission to the next stage of adulthood, a burden I had to clumsily carry up the socioeconomic ladder. But as I continued to take out more loans to pay for tuition, books, and my car, I slowly began to grasp that dealing with this debt was going to be more than some paltry inconvenience.

Halfway through the fall semester of my fifth year, my mother called me down to the kitchen table. In front of her was a scattering of old bills and manila envelopes. When I walked in, she stared at me for a moment and said, “Ken, we need to talk,” which usually meant that she needed to talk, and that the conversation would quickly become a theatrical dispute that would end with one of us storming out of the room and issuing the standard family rhetoric of accusing the other person of being insane, usually in the form of: “Are you insane?!” “You’re insane!” or “Oh my god, you’re insane!”

“We need to have a discussion about your loans,” she said gravely. “Do you realize how much money you’re going to have to pay back?”

My mom being in a fevered state of worry was nothing new to me. Because of her training as a nurse, throughout my adolescence I’d been subjected to one outrageous medical evaluation after another. I tried not to clear my throat in front of her because I knew she’d worry that I had whooping cough. I’d always wear a shirt around the house for fear that she’d diagnose one of my back pimples as a case of impetigo again. After so many misdiagnoses, I couldn’t help but become skeptical about all her misgivings. It became my instinct to counter her seriousness with playfulness, her pessimism with optimism, her insanity with inanity.

“I told you what I’m going to do about my loans,” I said. “I’m going to fake my death. You already knew that.”

I was joking, but I really did — if just for a moment — consider the idea. I thought if I yanked out a few teeth, scattered  them in my car, and burned it to a crisp before shoving it into Lake Ontario, then maybe the loan collectors would take me for dead. Without an identity, I’d have no choice but to melt into undocumented, under-the-table America — perhaps landscaping alongside Mexican itinerants or living on the second floor of a dingy pizzeria. Or maybe I could just skip the country and leave my debt behind. I’d go to some exotic archipelago, some lawless corner of Southeast Asia where I could embrace a life of crime. I’d start small, but over time I’d become kingpin of the region’s drug trade. I’d develop a paunch, wear silk shirts, and maintain a tan. I’d be merciful, yet ruthless — a benevolent dictator of sorts, keeping obedient villages safe but crushing those late to pay their tributes with an iron fist.

Unfortunately, my mother had cosigned the loans with me, which meant the burden of paying them off would fall on her if I disappeared.

“Do you realize how much $32,000 is?” my mom asked. “You have two loans. The interest rates are 4.75 percent. If you don’t make your payments, the interest will keep rising and rising, and so will your debt. Do you know what that means?”

“I can’t help but worry about it!” she said. She put her head down on the table and wept. It was one of the few times I’d seen my mother cry. I looked on in disbelief. What was I going to do?

That was the day I realized I’d have to start dealing with my loans.

Graduation came, and I needed a job, but I didn’t know anyone with connections: no philanthropic billionaires, no seedy uncles, no former employers. Still, I reassured myself that I was, in fact, an alluring job candidate. I could boast of a B.A. in history and English from a respectable college, a couple of internships under my belt, not to mention a long history of employment. Who wouldn’t want to hire me? I’d failed to realize, though, that my credentials were identical to those of thousands of other job-seeking grads. Not only that, but my résumé indicated to prospective employers that I was capable of little more than low-skill, low-responsibility work that no one else wanted. I’d been a cart-pusher at Home Depot, a paperboy, a supermarket cashier, a public skating rink guard, a fast-food cook, and a landscaper.

Between my liberal arts degree and my history of crappy jobs, I’d somehow made it through the first 22 years of my life without learning a useful skill.

I began to worry that I’d become one of those people who’d spend years, decades, their whole lives (!) paying off their debts, working eight hours a day, five days a week, fifty weeks a year, decades, lifetimes, epochs! I thought about my old coworkers and friends at the Home Depot: sad, tired, saggyeyed souls who’d spend forty hours a week doing things they hated at a place they all wanted to burn down. Some were stuck because they had debts of their own, because they needed the health insurance, or because they needed the money to feed their kids. But it seemed they weren’t all bound by these external constraints. Most were just too scared to leave. They tolerated the daily drudgery of work because dealing with daily drudgery was easier than quitting and doing something truly scary: sailing into unknown waters in pursuit of a dream.

I’d toil in Career World as long as I had to, but the minute my debt was paid off, I’d be gone. I’d tunnel my way under the businesses and institutions and corporations of the “real world” and come out, on the other side, with my body unshackled and soul unspoiled.

My mission was simple and straightforward: get the fuck out of debt as fast as humanly possible.
Without any better idea, I called a friend in Alaska who knew a camp in the arctic looking for a tour guide. Tour guide. I liked the ring of it.

The day after graduation, I hopped on a plane for Alaska. Coldfoot (population 35), situated 60 miles north of the Arctic Circle and nestled in the Brooks Range, is less a town and more a working camp. There’s a tire shop, truckers’ café, a 52-room motel, a post office, and not much else. The motel and café are separated by a large, muddied, potholed parking lot where the semis — when parked parallel to one another — look like packages of frankfurters. Surrounding the buildings are the rusted relics of the town’s industrial past: ramshackle mining equipment, abandoned trailers, derelict trucks.
When I arrived, I was overcome with doubt, fear, uncertainty and a hundred unanswerable questions. Why is the dishwasher pretending to shoot me with his index finger? How many appendages will I lose to frostbite — and what, exactly, constitutes an “appendage?” And most worrisome of all, how am I going to pay off $32,000 while making as little as $9 an hour?
Two weeks after my first tour, I got a paycheck in the mail. I took a deep breath and opened it. It was for $300. So began my journey to get out of debt.
“OK, not bad,” I said to myself. “Just $31,700 more to go.”

This is excerpted from Ken Ilgunas’ “Walden on Wheels.” To read more about Ken Ilgunas’ adventures, you can also read his Salon essay, “I live in a van down by Duke University."