He regrets “inaccurate” Benghazi email but says his story based on it “still entirely stands.” Really. ABC News? 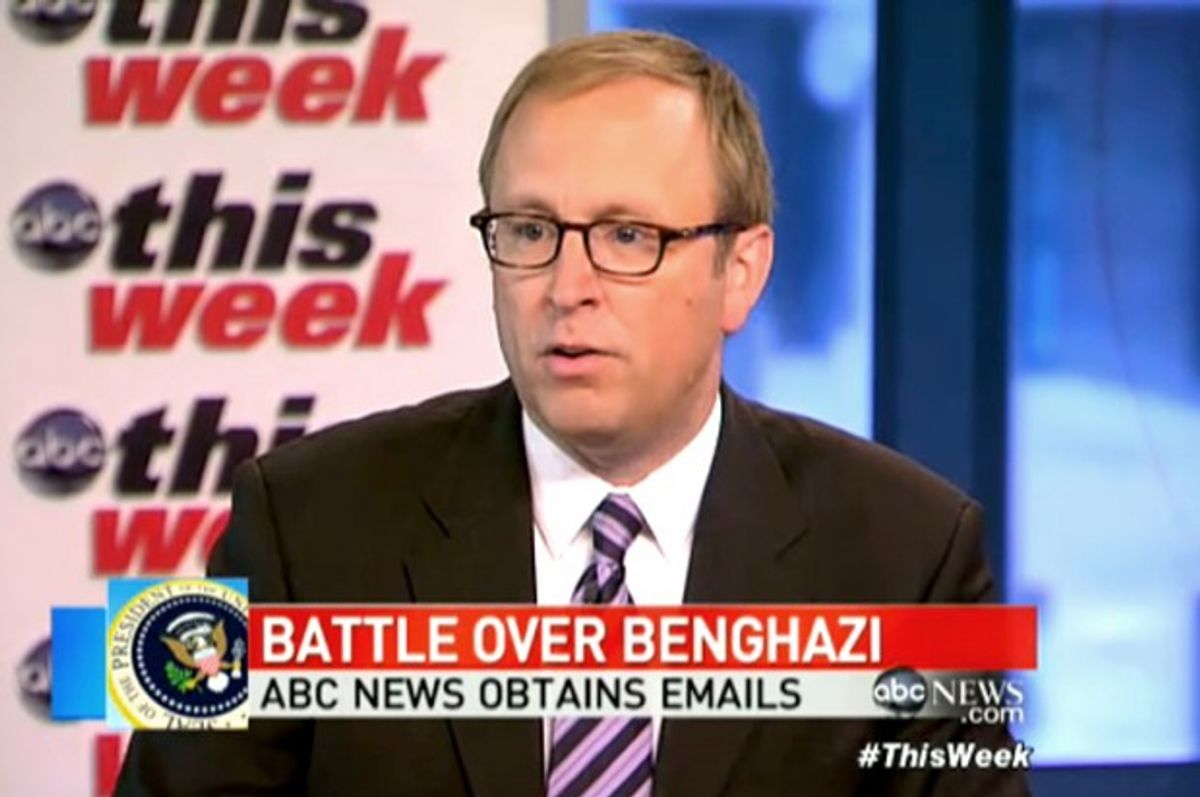 CNN’s Howard Kurtz, who knows a little bit about being in the line of media fire for his own work, offered ABC News’s embattled Jon Karl the chance to defend himself on Reliable Sources Sunday. Karl, of course, is in hot water because his “scoop” revealing that the White House tampered with Benghazi talking points relied on doctored email leaked by House Republican sources. That’s not my charge, by the way: CBS’s Major Garrett reported Friday that House GOP staffers peddled the doctored email to him and other reporters.

Karl didn’t appear on CNN, but he gave Kurtz a statement which is brazen and baffling.

Clearly, I regret the email was quoted incorrectly and I regret that it’s become a distraction from the story, which still entirely stands.  I should have been clearer about the attribution.  We updated our story immediately.

First of all, why was Karl providing a statement to CNN, but saying nothing on ABC's "This Week," which featured him and his "scoop" prominently last Sunday? That's just very weird.

On to the statement itself: Karl admits the email that served as an electronic smoking gun, proving the White House intervened on the side of State, “was quoted inaccurately,” but the story “still entirely stands.” That’s gutsy – and crazy.

The passive voice “was quoted inaccurately” sounds a lot like “mistakes were made.” Who quoted it inaccurately? Was it Karl’s source? Or was it Karl himself?

Indeed, Karl “updated” his story “immediately” -- only to say that despite the fact that Rhodes’s email didn’t say what he claimed it did, he stood by his story, and the real problem was that the White House refused to release the chain of emails. He hasn’t spoken since the White House took his advice and made the emails public – which unraveled his story entirely.

So how can the story “still entirely stand” if the Rhodes email was either doctored or dishonestly paraphrased?  Charitably, you might be able to say the top line of the story – that government agencies made extensive changes to a draft of the Benghazi “talking points” – is correct. But the power of the story was that it seemed to prove that the White House acted to protect the State Department politically. That’s not true, so the story clearly does not “entirely stand.”

Karl has gotten himself, and ABC News, in more hot water here.

Speaking of the Sunday shows, I can’t believe nobody asked what the House GOP was doing to get to the bottom of the scandal of who released the doctored White House email to Karl, Garrett and other reporters.  As Alex Seitz-Wald reported Friday, back in 1998, when a House GOP staffer was revealed to have selectively (and misleadingly) leaked testimony from former White House counsel Webb Hubbell, that staffer was fired, with even former Speaker Newt Gingrich railing against the abuse.

That disgraced House staffer, by the way, was David Bossie, who went on to head Citizens United, which unleashed a flood of ugly dark money – and also helped produce the IRS scandal that is currently eclipsing Benghazi in Scandalgate. Nicely played, Republicans – always and ever abetted by the mainstream media.

We need to hear from ABC News about this. Karl’s problems aren’t going away.