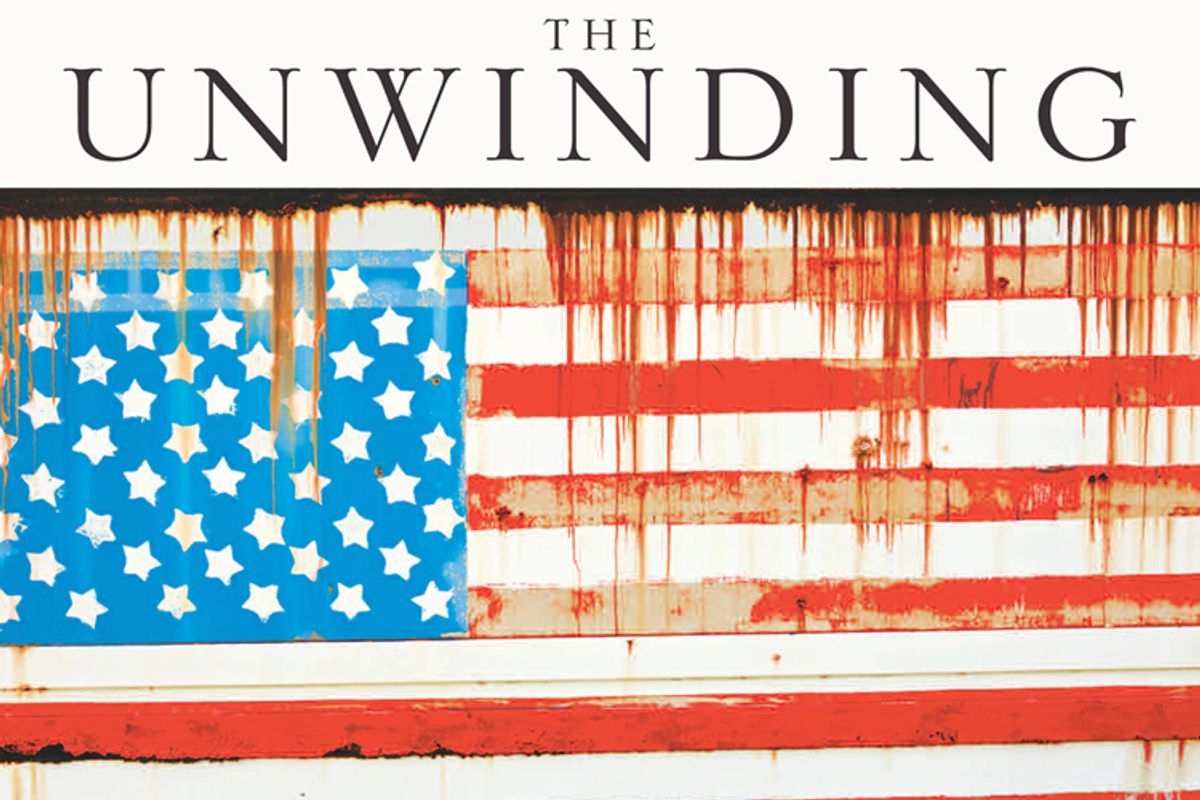 Think of George Packer's new book, "The Unwinding: An Inner History of the New America" as the un-Internet take on the transformation this country has undergone in the past 35 years. It's wide ranging, deeply reported, historically grounded and ideologically restrained. To write "The Unwinding", Packer clearly had to spend a lot of time out of his own habitat and in the company of other people, listening more than talking, and largely keeping his opinions to himself. Imagine that! It's called journalism.

Packer's inspiration, as he explains in the book's afternotes, was the "U.S.A." trilogy by John Dos Passos, three novels that use a third-person choral method to portray American life in the early 20th century. "The Unwinding," while nonfiction, is narrative rather than polemical or analytic. Each chapter is a story, or an installment in a story, about a person or place. Some of the subjects are famous (Newt Gingrich, Oprah Winfrey, Colin Powell, Alice Waters) because such people, Packer writes, now "occupy the personal place of household gods, and they offer themselves as answers to the riddle of how to live a good or better life." But the key figures, the ones whose trajectories arc through the entire book like ribs or rafters, are unknowns: an African-American factory worker turned organizer in Ohio, a disillusioned lawyer who drifts from public service to finance and back again, a Silicon Valley venture capitalist with extreme libertarian beliefs and a scion of North Carolina tobacco farmers trying to make it as an entrepreneur. In the book's most bravura chapters, the city of Tampa, Fla. serves as yet another character.

Each of these accounts, and the many smaller portraits to be found throughout "The Unwinding", is told from the point of view of the central figure with a minimum of editorializing by Packer, a staff writer at the New Yorker and author of "The Assassin's Gate," a book about the Iraq War. Dean Price, the North Carolinian, serves as an avatar of eternal American optimism. Price's faith in the peppy self-help gospel of Napoleon Hill, his intermittent revelations based on scripture and secular fable, his shifting allegiance from Reagan Republicanism to renegade green populism are presented without skepticism, as are the idealistic yearnings of a young Occupy Wall Street activist in the book's final half. A one-chapter portrait of an investment banker who profits from the real estate bubble and then rides out the bust gets told in the staccato, know-it-all lingo and rhythms of his trade. The chapters on Tammy Thomas' life in Youngstown, Ohio, by contrast, have the lilting cadences of a vernacular elegy: "Where had it all gone? The things that had made it a community -- stores, schools, churches, playgrounds, fruit trees -- were gone, along with half the houses and two-thirds of the people, and if you didn't know the history, you wouldn't know what was missing."

It's such an unfamiliar feeling -- to be left largely to draw one's own conclusions based on the prismatic experiences and conjectures of so many other people. Readers may at first find themselves wondering what Packer is trying to say even as he seems to be willfully receding into the wallpaper. His prologue offers a few clues; "the unwinding," he explains, is the giving way of "the coil that held Americans together in its secure and sometimes stifling grip." Depending on who you are, you might name that coil "community" or "values" or "civic responsibility" or "the safety net" or even "socialism." Opinions differ wildly on why and how things are getting worse, but it's hard to find an American who'd argue that they're getter better. "In the unwinding," Packer writes in a rare tipping of his hand, "winners win bigger than ever, floating away like bloated dirigibles, and losers have a long way to fall before they hit bottom."

Another persistent theme in "The Unwinding" is isolation. "This much freedom leaves you on your own," Packer observes. A tight-knit family of impoverished Floridians struggles to survive with minimum-wage jobs and frequent health crises, yet, together, they do get by. Others who start out with more resources are not so fortunate. Peter Thiel, the Silicon Valley venture capitalist, often makes a lot of sense, as when he disparages the information revolution as a flight from "this messy real world where things are incredibly difficult and broken" to an "alternate virtual world in which there's no stuff, it's all zeros and ones on a computer, you can reprogram it, you can make the computer do anything you want it to." Yet his own dreams are caught up in fantasies -- of defying "the ideology of the inevitability of death" and of self-sufficient sea-based libertarian settlements where capitalism will be permitted to save the world -- indicative of his inability to transcend the limits of individualism.

It's also clear that Packer views a series of financial deregulations as the cause of the unwinding. In his chapter on Elizabeth Warren, he depicts her come-to-Jesus moment while researching bankruptcies, the dawning realization that -- by dismantling the restraints imposed by the FDIC, the SEC and the Glass-Seagall Act -- American leaders ushered in an era of grotesque income inequality and enabled a series of crises culminating in the real-estate bust of 2008. The best writing in "The Unwinding" tracks that most recent crash as it unfolds in Tampa. Here's Packer's description of the raining down of foreclosure notices:

They arrived at houses where three months of mail lay in a pile at the front door, and houses where children were watching "Dora the Explorer" and adults had stopped answering the phone, and motels with 20 percent occupancy, and obscurely named investment entities with no known street addresses. They came like visitations from that laconic process server, the angel of death.

Amid the cascade of repossessions, a few crusaders emerge, such as an attorney who discovered that some of the defaulted mortgages had changed hands so many times "no institution could establish a clear right to someone's house." "All we're asking," the lawyer remarks to a judge at one point, "is for them to identify who is the entity that is asking my client to give them a couple hundred thousand dollars." The foreclosing was done on autopilot, sometimes literally by machines, and its victims for the most part just rolled over. But one of Packer's subjects, the owner of one of those empty motels, fought it all the way, with the support of her extended clan. Unlike most of Tampa's stricken, "Usha Patel was not a native-born American, which is to say, she wasn't alone."

Perhaps it's ironic that a book in part about the dangers of tackling life entirely on your own should leave its readers in just that condition when it comes to interpreting the stories it tells. And at first, this approach is a little disconcerting, so accustomed we have become to the heavy hand of opinion. It takes a while to adjust, but soon the merit of Packer's method emerges. Instead of compelling us to engage with his theory of the past 35 years of the American experience, Packer invites us to explore the experience itself, as lived by our fellow citizens. They're human beings, not evidence for an agenda or fodder for talking points. Understanding that is the first step toward reclaiming the nation we share with them.