Will you marry me -- once you're done peeing?

From popping the question while peeing to getting engaged for real estate, some proposals are charmingly unromantic 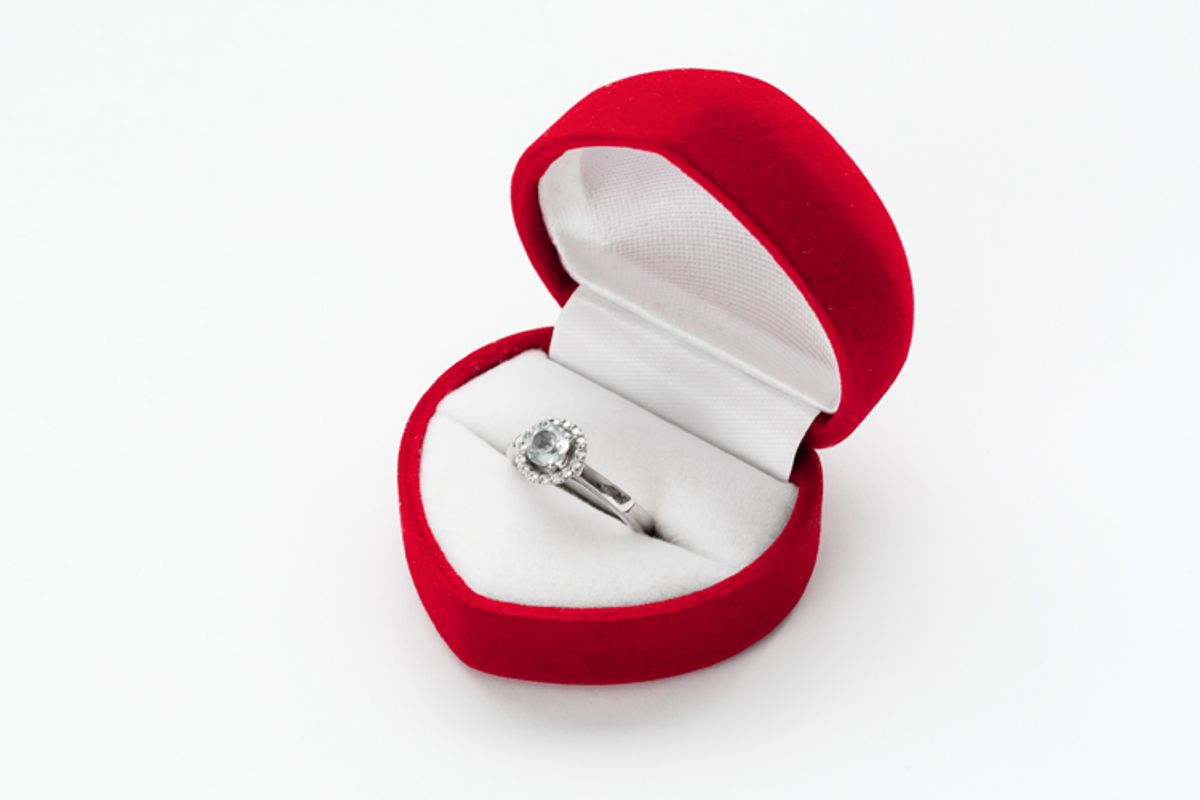 Andi was sitting on the toilet peeing when her boyfriend bent down in front of her.

He went into the other room and came back with a diamond. He slid the family heirloom onto her finger before she even got up from the toilet. They're now happily married and it's a cherished story that they share "more frequently than is appropriate," she says.

After I wrote about my own non-traditional proposal last week, people started sharing their own stories, like the toilet engagement above, with me. I couldn't get enough, so I started asking around for more. I was delighted to find that my feminism -- and basic critical thinking skills -- hadn't entirely inured me to romance. These stories of pragmatism, awkwardness and foiled plans were more enchanting than any viral YouTube proposal -- at least according to my warped sensibility. The traditional male proposal may still hold strong, as I wrote last week, but that doesn't mean that people aren't going against the ring-in-the-champagne grain -- or at least embracing the sweetness of imperfection.

When "Andy" was in college, his girlfriend of two years began dropping hints that she wanted to get married. "Subtle hints turned into an item number and a jeweler's name written on a Post-it note," he told me. Within minutes of receiving that not-so-subtle directive, he made up an excuse to leave the house and secretly went to the jeweler to buy the ring. It was summer, so he ingeniously decided to hide it in the fireplace -- only he forgot to take the receipt out of his wallet. His girlfriend was tight on money at the time and would occasionally take a couple dollars from his wallet to pay for lunch or gas. That night was one of those times. "Yeah, she found [the receipt], ran through the house like it was on fire and screamed, "Is this real!,'" he said. "I dropped to a knee in my PJs right there in the living room and handed it to her." It wasn't exactly what he had in mind, but "she was happy, happy," he says.

"Kara" and her boyfriend of six years were lounging around watching "Ricki Lake" one afternoon in 1994. Now, if that doesn't seem to set the mood, just you keep reading: "The show was about really awful wedding dresses," she says. They had previously decided that marriage was unnecessary, but the trashy daytime TV show prompted them to talk about the idea of having a wedding just "so we could have a cool party," she says. "In the end I said, 'Well, how about it?' and he said 'Yeah, why not?'" She says she never expected a tradional down-on-one-knee proposal, which she feels "encapsulates a rather simplistic view of what marriage should be." They got married in 1995 and are still together.

Carol Lloyd, who has written for Salon, tells me that she got engaged while apartment hunting with her boyfriend Hank. They were visiting "a remarkably affordable, sun-doused Victorian flat in San Francisco, which happened to be owned by the fundamentalist church next door," when "the churchy property manager" asked whether they were getting married, "in a way that would have made a fair housing attorney see dollar signs," she says. Hank suddenly announced, "Yes! We're getting married!" The manager asked when the ceremony would be and her beau exclaimed "Three weeks!"

"That was 20 years ago," she tells me. "Now we have history and two daughters and a peripatetic life of many homes and memories, but then the rent control apartment with the navel orange tree in the backyard was the only thing that could motivate two unemployed performance artists to propose committment to that backwards institution."

I heard plenty of stories of getting hitched simply to get health insurance -- but there were other practical but less expected reasons for engagement. "Mark" tells me that he and his wife, the youngest of ten kids, got engaged to free her from having to take care of her family. "She was always told that she could never get married, because the mom needed her to take care of her in her old age and also help care for her disabled siblings," says Mark. "And basically getting married was the only way out of this family obligation." There was no grand proposal, just a conversation that "was not fun," he says, about the practicality of the move. The engagement was a bit premature for them both, but after some turmoil, and therapy, "the story had a happy ending," he said. "We're celebrating our five year anniversary in August and we're all a big happy family."

Lynn got engaged before even getting out of bed one morning. "I woke up one day in February and turned to my beloved and said, 'I think today is a good day to get engaged. How do you feel about that?'" she tells me. "He said he felt good about that." So she got up and made French toast. "We sat across the kitchen table from each other with giddy smiles on our faces," she says. "It was lovely. No ring, no formal announcement." Then, two months later they got hitched at the oldest chapel in Las Vegas, just the two of them.

Even proposals that are designed to be picture perfect often aren't. A couple years ago, "Jackie" took a two-week trip with her then-girlfriend to Provence. "At the beginning of week two, she started behaving like a lunatic," she says. "She was so jumpy, uncharacteristically picky about where we went and what we did, and took her giant camera bag everywhere" -- which was where the ring was being kept -- "ignoring my protestations and the eye-rolls of our friends who now carried the mantle of being the ones hosting the geeky tourists in their tiny, private French town." Once they moved on to the très romantique city of Paris, "I was confused, more distant from her than usual and looking forward to just relaxing," she says. "I hadn't thought it possible, but [she] got even more nuts there. I thought she was going to snap, and I had no idea where my partner had disappeared to."

The awkwardness did not end there. They had dinner and several glasses of wine at an Italian restaurant, while seated outside with views of "charming flower box-lined apartment buildings." Then Jackie began chain smoking cigarettes -- first one, then two and when she lit the third, her girlfriend threw a ring box on the table in frustration. Her response, "Is this a joke?" Eventually, she said "yes" -- "because there really wasn't another option," she says. "But I wasn't happy. And that made me feel incredibly defective, because who has that reaction to a proposal?" -- and to a proposal in Paris, no less. It was only after reading a blog post "where the writer detailed why it is not only OK but natural to feel extreme doubt and hesitation after the big question," that she began to feel better about the proposal.

"I guess that's the main reason I decided to send you our story," she told me. And, really, it's the main reason that I'm sharing her story here. We don't hear enough about how romance can be everything from accidental to pragmatic. We want to believe that if our proposal -- not to mention the wedding -- is fabulous enough, then the relationship has to work out. It'll be too big to fail! But pricey proposal planners and enormous engagement rings aren't saving marriage any more than same-sex unions are destroying it. That's the scary thing: The fate of your relationship isn't determined by whether your proposal ends with the "Ricki Lake" theme song, or being carried off into the sunset by elephant -- but it just might be by how you react to it.