10 deep, crazy thoughts from the minister -- and Virginia Lt. Gov. nominee -- who has lots to say on gays and KKK 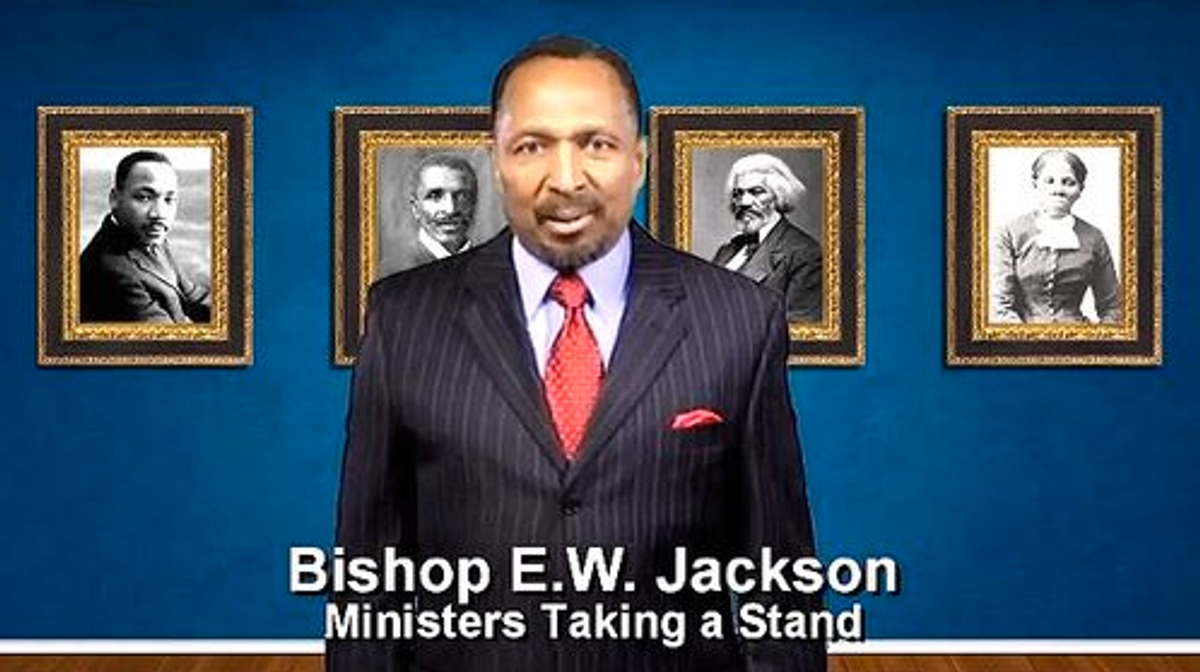 After years lurking on the fringes of the social conservative movement, expect to start hearing a lot more about E.W. Jackson, an African-American minister who just won the GOP nomination for Virginia's lieutenant governor. Jackson won the nod at the party's convention in Richmond Saturday, "thanks in part to what was far by the best-received speech of the day," Politico's Jonathan Martin reported.

We've been aware of Jackson for some years and while it's difficult to pick so few, here are 10 quotes from the conservative bishop to give you a sense of how he views the world.

1. On gay people: "Their minds are perverted, they’re frankly very sick people psychologically, mentally and emotionally and they see everything through the lens of homosexuality. When they talk about love they’re not talking about love, they’re talking about homosexual sex."

2. On gay people (again): "Homosexuality is a horrible sin, it poisons culture, it destroys families, it destroys societies; it brings the judgment of God unlike very few things that we can think of... It’s an authoritarian, totalitarian spirit."

3. Political predictions: Jackson said a few weeks before the 2012 election that black voters would "overwhelmingly" vote against Barack Obama because he had endorsed marriage equality. Over 90 percent of African Americans voted for the president.

4. On Democrats: "I liken them to slave masters who brag about how good their slaves are and how well-behaved they are but let them try to be free, let them try to escape and then you find out that they don’t really think very much of them."

5. On Planned Parenthood and the KKK: "Planned Parenthood has been far more lethal to black lives than the KKK ever was. And the Democrat Party and the black civil rights allies are partners in this genocide."

6. On liberals and the KKK: "Liberalism and their ideas have done more to kill black folks whom they claim so much to love than the Ku Klux Klan, lynching and slavery and Jim Crow ever did, now that’s a fact."

7. On the Democratic Party's agenda: "An agenda worthy of the Antichrist."

8. On Don't Ask, Don't Tell: "The new Marine motto: 'The Few, the Proud, the Sexually Twisted.' Good luck selling that to strong young males who would otherwise love to defend their country. What virile young man wants to serve in a military like that?

9. On boycotting CPAC for being too gay: "The self-proclaimed gay Republicans support hate crime laws (which will be used to bludgeon the church) and oppose the Federal Defense of Marriage Amendment, without which judges will ultimately legislate homosexual 'marriage'—making the natural family an endangered species... What would Ronald Reagan think of CPAC today?”

10. On Obama's Muslim sensibilities: "Obama clearly has Muslim sensibilities. He sees the world and Israel from a Muslim perspective. His construct of 'The Muslim World' is unique in modern diplomacy. It is said that only The Muslim Brotherhood and other radical elements of the religion use that concept. It is a call to unify Muslims around the world."