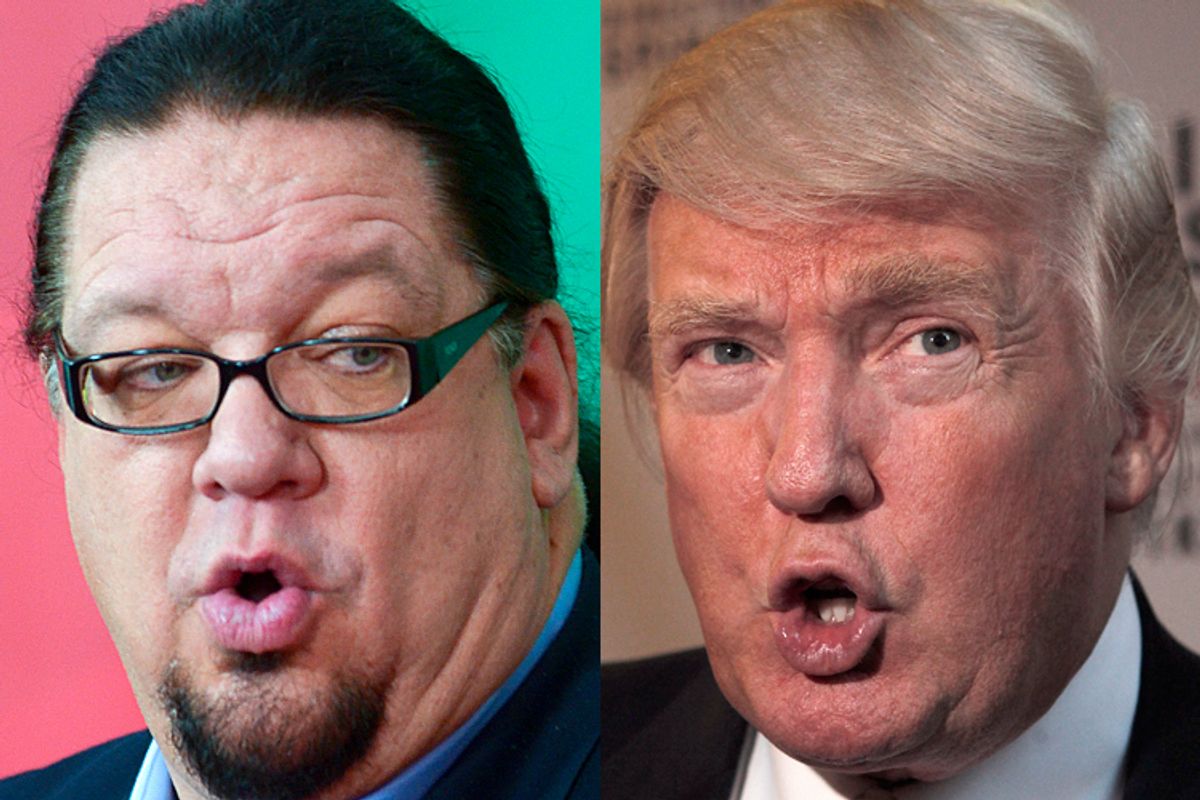 In November 2012, Salon published an excerpt of the magician Penn Jillette's memoir, "Every Day Is an Atheist Holiday," in which he unloaded about his experience as a cast member on "Celebrity Apprentice." After describing an uncomfortable confrontation with co-star Clay Aiken, here's what he wrote:

No one loves anyone on the set enough to say, “Hey listen, man, take a little break and think about this.” No one cares. We’re all trying to save our own sorry asses. Then the next day, Trump says something insane like, “I’m glad you showed some backbone. I like passion.” He means, of course, he likes passion for his little TV show, but it feels like he’s saying the outburst was a good thing. We’ve chosen to make this whackjob, with the cotton candy piss hair and the birther shit, into someone we want to please.

Jillette didn't just choose to return to "Celebrity Apprentice" for its all-star season, which concluded its run last night. The series had already begun filming when his piece was published on Salon.

Last night, Trump decided between Jillette and country singer Trace Adkins for the win, a title that came with a $250,000 purse for the winner's pet charity.

And in the final segment of the episode, Trump singled out Jillette for particular criticism:

So Penn, you said some really bad things about me the last time when you got fired. And you were nice enough to send me a letter, but you attacked me in a lot of ways. You even attacked my hair, but you did say it was real [Jillette called Trump's hair "a lot better than mine"]. Do you regret that?

Of course, Jillette vociferously defended the position he'd staked out in print. Right?

No, I don't regret telling the truth, but my mind has changed. I did not know when I was first on the show that it was honest. I thought this was a second chance. I think you can say that since the second season started, I have been polite, energetic and nothing but pro-the show.

Jillette went on to thank Trump for the donations to his chosen charity thus far and to note that interest in his magic troupe Penn & Teller had gone up "thirty percent." Perhaps Jillette's sycophancy at episode's end shouldn't have been surprising. He was trying to win a game he'd played hard, and he may have inadvertently sabotaged it with his candor off-camera. Wrote one reality-TV blogger:

The interesting thing here is that if we were judging this season based on actual performance, there is little questioning on our end that Penn played quite possibly the second- or third-best game in the history of the show, behind John Rich and maybe Piers Morgan. The issue here, of course, is that Trump, almost understandably so, is going to have a bias in this sense. If you are in control of who wins a season, are you going to give it to a guy who publicly referred to you as a “whackjob” and mocked your political beliefs? We loved Penn, but we do recognize the dilemma.

Asked if he liked the experience better this season, Jillette said, "The show has always been completely honest. And that is rare and surprising in reality TV. I don't believe anything is distorted, and everything is straightforward, and I love that."

Jillette's piece on Salon, published six months ago, read: "It’s Schrödinger’s showbiz: It’s all fake and it’s all real at the same time. The situation itself makes everyone crazy."

We've reached out to Donald Trump's camp and will update if they reply.