After failing to stop Colorado from legalizing it, pot foes now want to criminalize drug images and media content 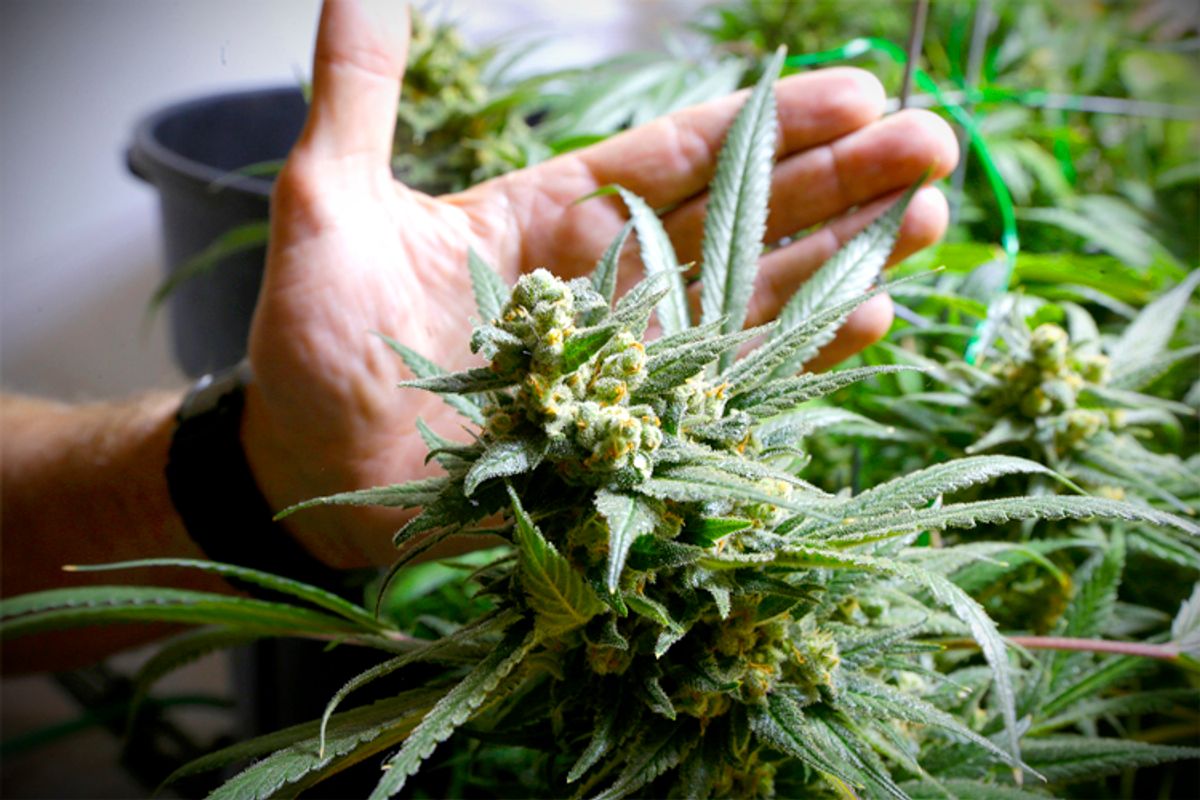 Can the mere image of a green leaf be considered obscene? If you think that's the kind of navel-gazing philosophical question to only be pondered by stoners, you are half right -- it does have to do with marijuana. But it isn't just an abstract and pointless query; it's an important and relevant legal one thanks to a bizarre effort to criminalize the mere image of the cannabis plant.

The setting for this effort is Colorado. After citizens here overwhelmingly backed Amendment 64, which fully legalizes marijuana, the state is now experiencing predictable attempts to thwart voters' will. The first of those was an attempt to automatically repeal the amendment if voters didn't approve a new tax to fund marijuana regulatory enforcement. The second of those has been municipal and state proposals to criminalize images like the cannabis leaf and media content about marijuana, despite the fact that access to the substance is now a constitutionally protected right in Colorado.

The history of this particular free-speech controversy dates back to 2012, when the Denver Post reported that "in a vote that lasted less than a minute" the Denver city council enacted a citywide ban on "all outdoor medical-marijuana advertising in the city" including billboards, posters, bus benches, windshield leaflets and sign twirlers. In this, the Associated Press noted the city was joining Delaware, Montana, Vermont and Washington State in regulating speech about marijuana.

Because marijuana was still only officially a medicinal substance in 2012, advocates of curtailing the marketing of medicinal marijuana could at least back then cite America's earlier restrictions on prescription drug advertisements as historical precedent for the pot advertising ban. Referencing that history, they could additionally claim an ad ban wasn't any kind of broader and unprecedented assault on the deeper principles of free speech.

The same, however, cannot be said today in Colorado. Thanks to the statewide ballot measure in 2012, cannabis is legal not just for medicinal use but also for recreational use, meaning that new ad bans are trying to curtail speech about a constitutionally recognized consumer product.

Despite that new reality, NBC 9 News reports that at the end of the legislative session, groups supporting the continued Drug War slipped language into a last-minute bill that would force stores to hide behind the counter any magazine "whose primary focus is marijuana or marijuana businesses." According to the bill language, it would also ban marijuana related pop-up ads on the Internet and also ban ads promoting any "health or physical benefit claims" about cannabis.

Looked at strictly through the prism of drug use, it is shockingly hypocritical that this language sailed through the Colorado legislature and now awaits Gov. John Hickenlooper's signature.

It is hypocritical because the Colorado that is citing concern about drug use as justification to crack down on marijuana-related speech is also the same Colorado proudly promoting the far more toxic drug known as alcohol. Yes, among other things, Colorado's professional baseball field is named after a beer company; its governor brags about building a business career off peddling alcohol; and the state's craft brewing industry (which, by the way, I love) is promoted by municipal governments as an integral part of the state's tourism appeal.

On the other hand, considered as a free speech issue, it is no coincidence that this is all happening in Colorado. This state has, after all, displayed an acute hostility to First Amendment principles. In only the last few years, its largest city engaged in mass arrests of protestors at the Democratic National Convention while also trying to confine First Amendment rights to fenced-in "free speech zones"; its state government deployed weapon-brandishing riot police against non-violent Occupy Wall Street demonstrators; and its biggest public university shut down its campus to quash the annual 4/20 protest against the ongoing Drug War.

But, then, even for a place this hostile to free expression, this latest move against marijuana-related content may be a step too far. As the conservative Denver Post editorial page (which opposed Amendment 64) noted, this new bill is "patently an affront to free speech" that "not only defies normal logic, (but also) defies established First Amendment law."

Tracing the history of First Amendment jurisprudence, Jacob Sullum, the senior editor of the libertarian Reason magazine, shows that the Post is absolutely right:

Even though the U.S. Supreme Court applies a relaxed First Amendment standard to "commercial speech," it has overturned much less sweeping restrictions on tobacco advertising ...

In the 2001 case Lorillard Tobacco v. Reilly, the Supreme Court overturned a Massachusetts ban on tobacco billboards within 1,000 feet of a school or playground ... (the court) said the 1,000-foot rule swept too broadly, barring outdoor tobacco advertising from "a substantial portion of Massachusetts' largest cities" and in some places amounting to "nearly a complete ban on the communication of truthful information about smokeless tobacco and cigars to adult consumers."

Based on similar reasoning, the U.S. Court of Appeals for the 6th Circuit last year overturned the advertising restrictions imposed by the Family Smoking Prevention and Tobacco Control Act of 2009, which banned the use of color or pictures in outdoor ads, indoor ads (except those in adult-only businesses), and print ads carried by publications with significant underage readerships ...

Again, these regulations, while also aimed at protecting children, were less restrictive than the regulations that the Amendment 64 task force is recommending for marijuana, which would ban ads pretty much everywhere except "adult-oriented" publications and websites.

From this, Sullum concludes that "it is hard to see how an ad ban as broad as the one favored by the task force could survive judicial review."

He's probably -- and hopefully -- right, though that gets back to the initial point about obscenity. The judicial system has interpreted the First Amendment to not fully protect content that localities deem "obscene." This, of course, is how municipal governments have been able to regulate stuff like, say, pornography. Now the question becomes: will state and local governments claim that the marijuana leaf deserves the same "obscene" classification -- and will the courts uphold such a claim?

Coming less than a year after the Chick-fil-A controversy saw a blatantly unconstitutional effort by some local governments to punish the restaurant chain for the (admittedly abhorrent) speech of its CEO, the Colorado quandary poses another serious and potentially far-reaching challenge to the First Amendment. Indeed, because the proposed marijuana ad ban is not a blanket content-neutral prohibition on an entire method or form of speech (like, say, the one on outdoor advertising in Sao Paulo), we could see the response to an inevitable court challenge end up widening the possible definition of obscenity in general; expanding the right of governments to persecute speech on the basis of content; and thus empowering authorities to regulate or even ban content they simply do not like.

That would be way bigger than a narrow challenge to ads with marijuana leaves -- it would be a much larger affront to the First Amendment's prohibition against "abridging the freedom of speech."