SAT's right answers are all wrong

Retaking the test alongside my daughters, I learned (the hard way) that testmakers devalue critical thinking 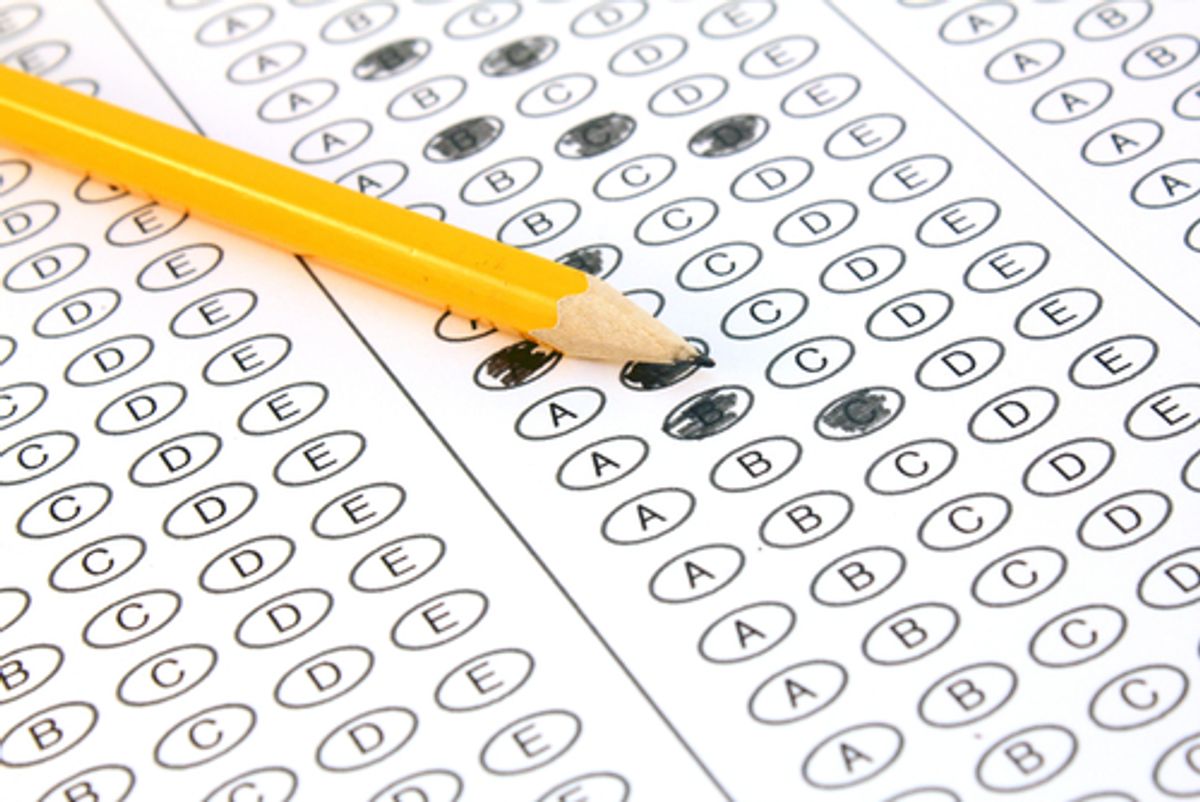 HAVING SHARPENED THEIR #2 PENCILS, my teenage daughters are about to take this spring’s battery of standardized tests, leaving me to wonder what these tests mean — about their education, about the culture of college my husband and I are preparing them for, about American values. So I thought I’d take a look at the SAT Subject Test in literature as a mini case study. I chose the literature test because it’s a subject I’m supposed to know something about. After all, I have a B.A. and a PhD in English. I have spent the last 25 years thinking about, writing about, talking about, and teaching literature. A one-hour subject test designed to test high school students on their reading comprehension should be a cakewalk.

Well, I was wrong. Or, at least, the high number of incorrect answers on my answer sheet suggested that someone or something was wrong. Puzzled, I looked at the answer key for one section in particular, the section that featured a passage from one of my favorite novels, George Eliot’s "Middlemarch." When I first saw the passage, I was thrilled because I have read "Middlemarch" more than a dozen times. I have taught it and written about it. I know it very well. I had even taught this particular passage. It concerns Mr. Casaubon, an elderly scholar, who plays one of the novel’s most villainous characters by being mean and petty to his young wife, but who is also one of the novel’s most complicated characters; Eliot invites the reader to judge Casaubon harshly at the same time as she clears the way to — in her own words — pity him.

His experience was of that pitiable kind which shrinks from pity, and fears most of all that it should be known: it was that proud narrow sensitiveness which has not mass enough to spare for transformation into sympathy, and quivers thread-like in small currents of self-preoccupation or at best of an egoistic scrupulosity.

Sensitivity that cannot transform into sympathy — one needn’t know the rest of the novel to see that there is a moral vision here in the embrace of a sympathy that Mr. Casaubon is incapable of feeling, and in a condemnation of his cowardly (“quivering”) small-mindedness. The passage goes on to ridicule Casaubon for egotistically believing in the transcendent importance of his "Key to All Mythology," the scholarly opus he has devoted his life to: In its presumption of universal comprehensiveness, its very name, "Key to All Mythology," conveys the sense of this work as a joke. His own colleagues have noticed it only to publicly denounce it. And yet the final section of the passage depicts Casaubon’s discovery of his colleagues’ disdain and gets us to feel sad for him in the poignant image of a drawer in his desk where he has hidden the published denunciation. It’s complicated.

The “best” characterization of the narrator’s attitude towards Casaubon, however, according to the answer guide, was not my choice, “(D) bitter disparagement,” or the one that tempted me, “(A) ambivalence,” but “(E) incisive criticism.”

Any expert test-taker will have sniffed out my mistake; it’s a strategic rule of thumb that revered authors are not bitter or ambivalent — they are incisive. The answer key explanation included in the College Board’s "Official Study Guide for All SAT Subject Tests" amplifies its view of the passage as disinterested, morally neutral, and monotone: “Although the narrator is critical of Casaubon, he or she does not seem to be disgusted or bitter; the narrator also does not seem to have mixed feelings or experience any confusion.” While it’s true that the narrator doesn’t seem to feel any confusion, it is not true that the narrator does not seem to have mixed feelings: Casaubon is “pitiable” despite his offensive egoism. More importantly, however, the passage condemns Casaubon for this egoism. It is not disinterested or analytical in the way that “incisive criticism” would suggest. As a key — if not to all mythology, then to the novel, to all of George Eliot’s work, indeed arguably to all of Victorian fiction — the passage identifies the sympathy that we feel or do not feel for others as the basis of meaningful human experience.

Although I come from the world of seminar discussions in which there are many right answers, the answer the College Board endorses here seems especially wrong because it assumes simplicity where there is nuance. And this wrongness is not just a matter of interpretive error. The student who gets the narrator’s view of Mr. Casaubon right, according to the College Board, is the same student who has missed the point of Eliot’s wonderful, challenging, life-changing novel. And in some sense, that student resembles Mr. Casaubon himself, a scholar who reduces the rich multifariousness of the literary experience into a single note just as he seeks one and only one “key” to all the stories and fables and wisdom and magic contained in the world’s many mythologies. Right or wrong, Mr. Casaubon would not make a welcome addition to any classroom formed around intellectual complexity.

While it’s hardly going out on a limb to call attention to the way in which a standardized test might reward simplistic thinking, it’s worth pausing to consider how the importance of getting the “right” answer in the college admissions process can play out in the college classroom and in the intellectual, emotional, and ethical lives the college classroom is designed to shape. Such a pity that these standardized tests, devised as a means of meritocratically broadening access to the privileges of education beyond the purlieus of private prep schools, now serve the consolidation of another Victorian concept, that of two nations: one of the rich and one of the poor. Although standardization in education — from the College Board’s products to the accountability testing championed by the school reform movement — illustrates America’s serious and inspiring commitment to the democratization of access, the consequences of this particular tool are complicated.

Affluent students today learn to read for nuance in expensive private schools, but then are trained to read for simplicity by often expensive test-prep tutors. That they are coached to strategize the right test answer rather than respond meaningfully to the material doesn’t really matter, because when the testing is over, they will return to the classrooms where it is the play of ideas and the depth of thought that matter most, and where they will learn to interpret tricky texts and complex situations. The education these lucky students enjoy, whether in good private schools or good public ones, is ultimately not about strategizing the right answer on a test. It is an education of the mind and the heart. Its goals encompass not only the know-how required to make the world better materially or our bodies stronger medically, but the knowledge necessary for navigating ethical choice, failure, loss, love, the integrity of the soul. It is the education we use when we choose a partner or vote. It is the education we turn to when we find ourselves in a dark forest, for the clear path was lost. In other words, this is an education that is supposed to serve students well after college.

For these students, test prep poses no obvious hardship. And anyway, there’s nothing wrong with strategizing. It’s a useful skill. There’s nothing wrong with high test scores and right-answer strategies. But in the amphetaminic race to achieve them, it’s worth reflecting on what right-answer thinking means about the devaluing of intellectual engagement, and it’s worth striving to make that distinction legible to everyone.

The signs that American education is increasingly polarized into two nations are clear at the high school as well as the university level. While prestigious private high schools, for example, have reduced or eliminated their offerings of College Board A.P. courses on the grounds that good teachers do not want to teach to a test, the number of A.P. courses in public schools has grown enormously. While Dartmouth, an Ivy League school, just announced it will no longer give credit for A.P. exams, Indiana University, a state school, grants not only A.P. credit, but college credit for high school courses that are offered through their Advance College Project, a program that features high school teachers who, however gifted, do not have the credentials typically required for college professors. A recent email advertising the College Board’s A.P. curricula makes the appeal of these efforts clear: scoring well can save a family “thousands of dollars in tuition and fees.” That private school families rarely acknowledge this incentive reflects either their own financial means, or their intention to send their children to a school like Dartmouth, or both.

That financial reality is the same one driving the adoption of MOOCs and online learning platforms as alternatives to traditional classroom teaching. The faculty at Amherst, a private college, was given the power to provisionally reject an arrangement with edX, but the philosophy faculty at San Jose State University, a public university, could only write a letter protesting the foregone adoption of online courses by administrators. The difference between private and public education is starting to look alarmingly stark, even when we are not talking specifically about standardized tests.

This distinction, between complex thinking and right-answer thinking, increasingly defines the difference between elite educational opportunity and the education of the rest. Standardized test-based curricula are easier to implement on a large scale, while the apprehension of complexity is not. It seems that one of the pivotal challenges American education faces today inheres in how the middle classes manage to demand educational equality. When we talk about democratizing access, it seems to me, it isn’t about designing “fair” tests that measure rote right-answer abilities. It is about insisting on curricula that matter, about providing the education we want all students to experience, not just the already-entitled.

Perhaps I should return to George Eliot and poor Mr. Casaubon’s mistaken enterprise. If mythology names the stories a culture holds most sacred, whether about the ancient origins of the seasons or the modern promise of social progress and mobility, what I learned from my adventure with an SAT test reprises what I know from the novel it cites: a key is nothing more or less than what we make of it.