For now, blaming the Moore, Okla., tornado on global warming is bad science and bad politics 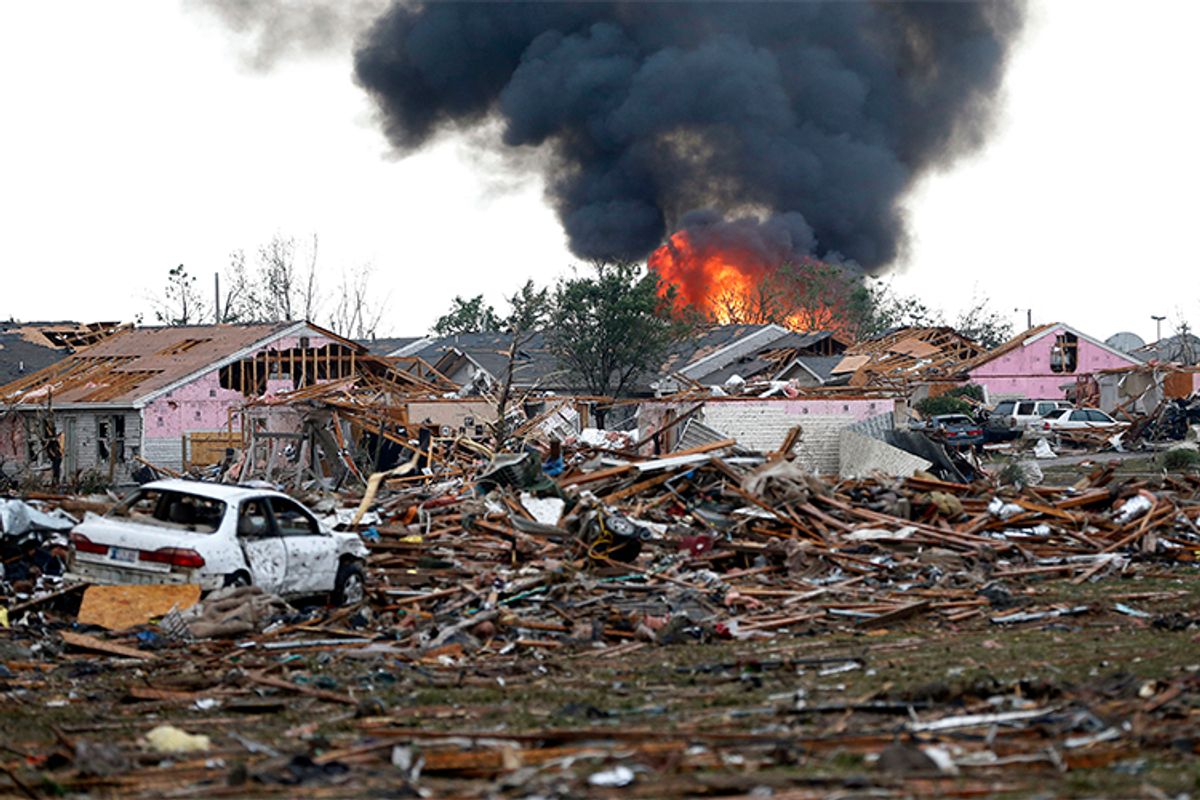 As soon as pictures and videos of the devastation in Moore, Oklahoma, started to spread through social media networks, so too did the angry and anguished tweets about climate change.

It's an understandable reaction. We don't know for sure yet, but Monday's tornado may turn out to be the worst ever on record. In the larger context of a world in which extreme weather events appear to be increasing in frequency and intensity, it's natural to look for a culprit when confronted with unthinkable carnage.

In the New Yorker, Amy Davidson reflected the same urge, while being careful not to make a direct connection between climate change and tornadoes.

Every extreme weather event these days provokes questions about climate change; that is because, as Elizabeth Kolbert notes in this week’s Comment, the climate has changed extremely. Tornadoes, as it happens, have been an area of some controversy: two years ago saw a spike, but then last year a low. We’ll see; it will be for scientists to sort out how currents and temperatures and other factors fed into this storm. Climate change means, more than all the lines on charts always going in one direction, that the weather rhythms we think we know by heart, and that we’ve built our cities and lives around, are all out of sync.

Emphasis mine. But the facts, so far as we know them, do not support a strong connection between tornado intensity or frequency and climate change. Tornadoes are tricky, they require warm, moist air, which we should get more of from climate change, and dramatic wind shear, which we should get less of as the planet heats up. Sure, 2011 saw a record number of tornadoes, and lots of talk about a possible climate change link, but then the last 12 months, up until this week, witnessed the fewest tornadoes in more than 20 years.

As for weather systems out of sync with the way we've built our cities -- well, if there is one place on the planet that could reasonably be said to expect devastating tornadoes on a routine basis, it's Oklahoma City and its environs. Tornado Alley got its name for a reason. Warm Gulf air hits cold Canadian air, creating conditions, according to Weather Underground's Jeff Masters, that that are unlike anywhere else on earth. Since 1890, 149 tornadoes have slammed into the Oklahoma City area.

If it's true that this particular tornado was two miles wide and featured winds of 200 to 300 mph, then it is an unprecedented event, and that fact alone will require weather scientists to rethink what they know about tornado formation. Maybe, down the line, a climate change connection will emerge. But for now, the most we know is that this was a really terrible tornado in a region that has had much experience with really terrible tornadoes. When we jump the gun and let loose the dogs of climate-change war, we damage our own ability to make a convincing argument in cases when the evidence really does suggest a smoking gun.