It's Whitewater all over again

Obama's "scandals" are not like Nixon's. They're a fishing expedition to stop his agenda and find something bigger 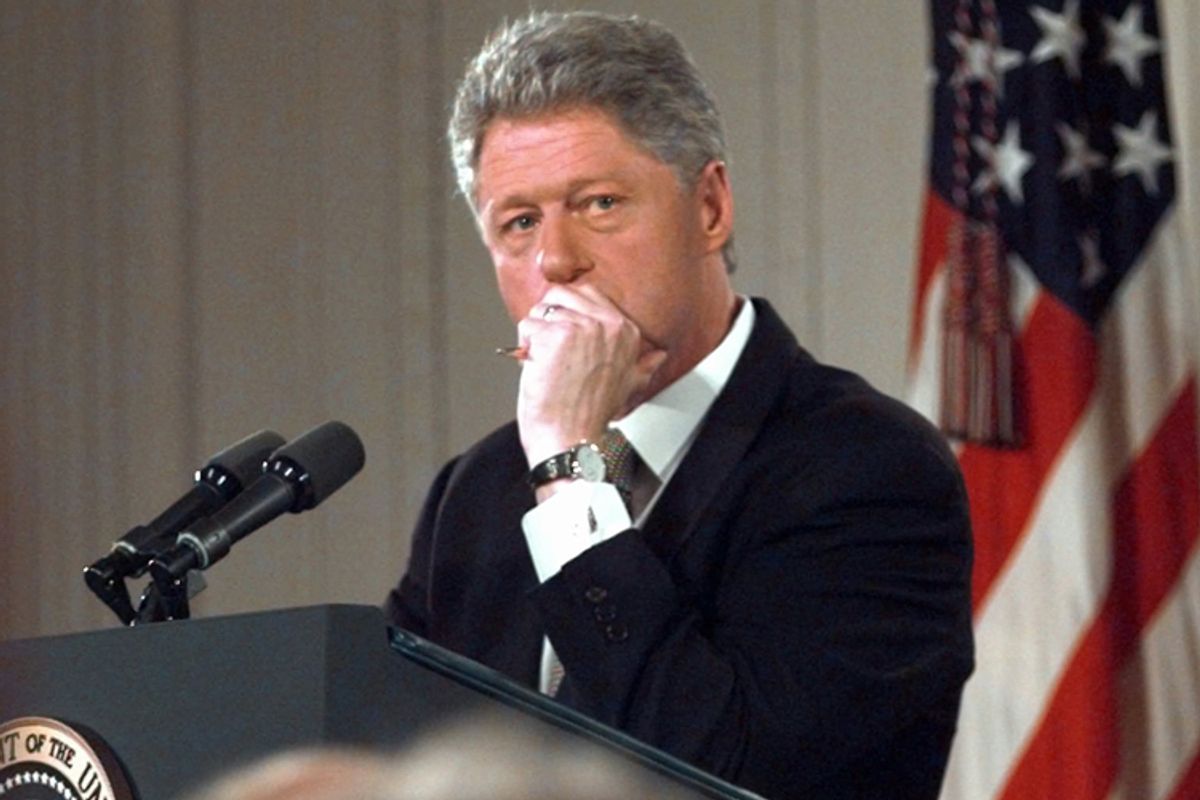 It is always disheartening when Bob Woodward shows up on our televisions. As a dashing young investigative reporter at the Washington Post, Woodward was part of an intrepid team whose reporting revealed that President Richard Nixon had personally directed a cover-up of crimes that were paid for by his reelection committee and executed against his political enemies.

Watching the Woodward of today pimp his personal brand on cable TV — call it innuendo with gravitas — is something like seeing a former Hall of Famer dispense motivational tips at a business seminar in Topeka.

And yet no event is more emblematic of our historical moment than Woodward’s appearance last week on Morning Joe, an MSNBC program devoted to the promotion of overpriced coffee, with a side dish of political hype.

Asked about the various “scandals” confronting the Obama administration, Woodward dutifully hit his mark. “I know there have been these comparisons to Watergate,” he told host Joe Scarborough. “I would say not yet, Joe … You’ve got to investigate all of these things.”

Perhaps fearing he had come off as too reasonable for the pundit circuit, he then reversed course, averring that the administration’s response to the murder of four Americans by Islamic extremists at the embassy in Benghazi, Libya, might already warrant comparisons with Watergate.

"If you read through all these emails, you see that everyone in the government is saying, ‘Oh, let’s not tell the public that terrorists were involved, people connected to al-Qaida. Let’s not tell the public that there were warnings,’" he said. “And I have to go back 40 years to Watergate when Nixon put out his edited transcripts to the conversations, and he personally went through them and said, ‘Oh, let's not tell this, let’s not show this.’ I would not dismiss Benghazi. It’s a very serious issue.”

You got that, viewer?

The confused squabbling undertaken by bureaucrats in the foggy hours after a chaotic overseas tragedy is just like a sitting president orchestrating a months-long campaign of deception to hide criminal activities undertaken by his reelection committee.

Of course, with or without Woodward’s imprimatur, our media class routinely affixes the suffix “gate” to any controversial story involving President Obama. In the fervent paranoid laboratories of the right-wing media universe, a Marine holding an umbrella for the president so he doesn’t get rained on receives tabloid treatment as Umbrellagate.

The irony hovering below all this nonsense is that the media is using the wrong historical referent. The “scandals” confronting President Obama are derived almost entirely from the political and media mindset that gave us Whitewater.

That is to say, they are minor instances of bureaucratic incompetence and/or executive overreach that are seized upon by hysterical right-wing media and politicians and eventually aggrandized by their craven mainstream brethren into red-alert-Chryon, full-scale Media Narratives.

The engine of belief that drives these stories is that, with enough rooting around by reporters and congressional panels and special prosecutors, the president eventually will be implicated in some kind of Major Impropriety.

This is what allows otherwise self-respecting journalists to flog stories that are, by all rational standards, partisan boondoggles. Travelgate begets Filegate, which begets Troopergate, which begets … Lewinsky.

This is the beauty of the scandal mentality: It’s inherently speculative. And it is thus nourished not by an accretion of increasingly damning facts, as in Watergate, but by a daisy chain of lurid conjecture and tangential inquisitions. To quote the sage, “You’ve got to investigate all these things.”

To put it plainly, Watergate was a foxhunt; Whitewater was a fishing trip.

The enduring lesson of Whitewater is that fishing trips can serve as an effective means of political opposition, particularly in the absence of a coherent governing agenda.

The recent controversies that have dogged Obama will, in all likelihood, amount to very little as legal or moral events. Nonetheless, they are already serving their intended function, as an ad hoc campaign of distraction that has pushed the president’s agenda off the front page and provides congressional Republicans safe cover for opposing his more popular measures, or for simply refusing to perform any meaningful legislative function.

Forget gun-control measures. Forget immigration reform. Forget job creation. Forget a grand bargain. And don’t even think about carbon emissions. For the foreseeable future, the front pages will be devoted to Fishing Trips.

Of course, back in the 1990s, it was possible for Clinton to get some things done in his second term, even after his impeachment by the House, thanks to his ability to triangulate with Republican leaders.

Obama will enjoy no such latitude. Congressional redistricting has left GOP lawmakers with no motive to seek compromise, while the rise of extreme candidates willing to run against moderates in primaries has made them desperate to kowtow to their base.

The media landscape has shifted, as well. Politics has become a lucrative and around-the-clock form of entertainment. This and the steady proliferation of corporate-funded conservative media outlets whose sole purpose is to smear the president — what Hillary Clinton once quaintly referred to as “a vast right-wing conspiracy” — has led to massive scandal inflation.

Don’t believe me? Consider this thought experiment, particularly in light of how much cultural oxygen has been devoted to the four Americans killed in Benghazi.

Imagine that Barack Obama had been president when a terrorist attack masterminded by Osama bin Laden killed more than 3,000 Americans on our soil, and that, just 36 day earlier, he had received a daily briefing from the CIA entitled “Bin Laden Determined to Strike in U.S.”

Or imagine that Obama launched a military invasion based on faulty intelligence. Or that his administration was found to have secretly approved wiretapping of American citizens.

You get the point.

This is not to suggest that the Obama administration, and Obama himself, is incapable of generating a scandal of genuine ethical significance. Maybe somewhere beneath his cautious, technocratic exoskeleton beats the diseased heart of a closet Nixon.

It’s just become a cynical game in which all parties have learned to play their given role.

The result has been a widespread regression of our political and civic discourse. We’re no longer able to make basic moral distinctions between crises that actually impact our lives — climate change, resource depletion, income inequality, the corruption of our political system by money — and ginned-up scuttlebutt.

Or maybe it would be more accurate to say that we choose not to make those distinctions.

Who wants to confront the hard work of democracy anyway, when you can always just hang a sign on the country that reads "Gone Fishin’"?