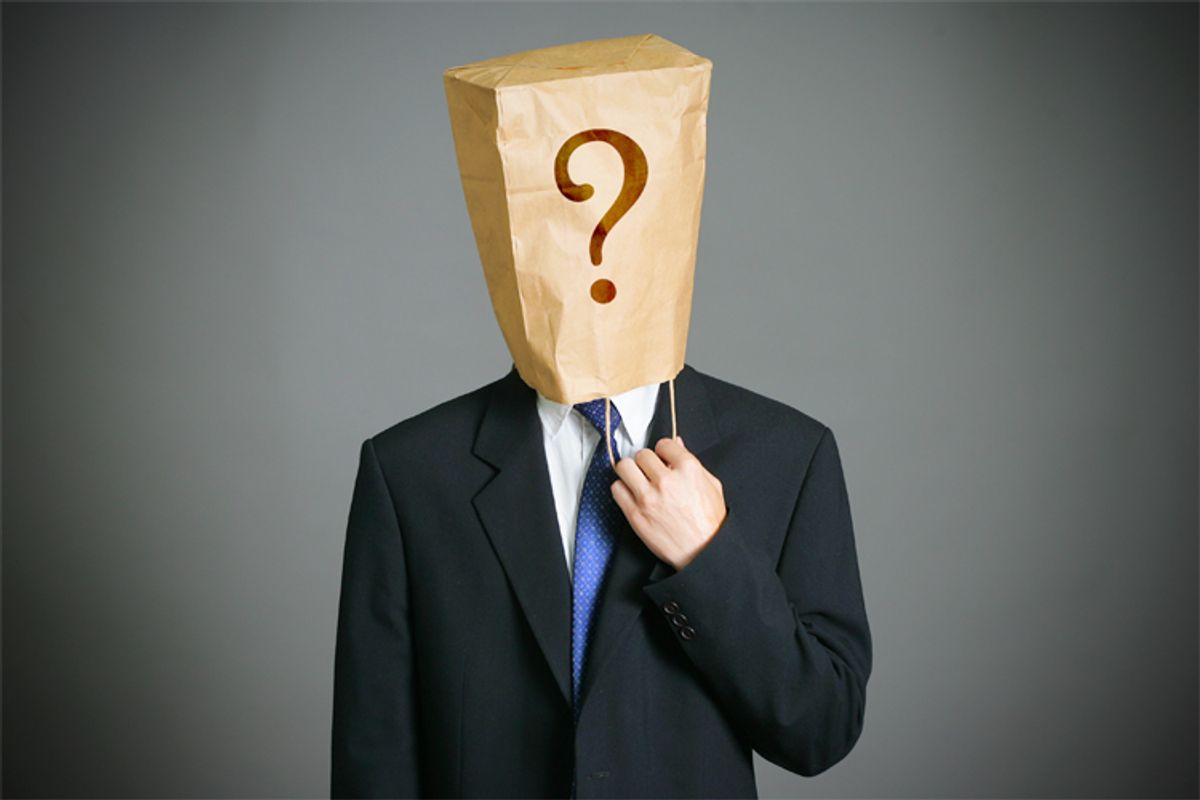 If you look at the redacted decision a federal judge in the District Court of Maryland handed down last October, you would think it involves a classified CIA program, burying all pertinent information -- sometimes almost entire pages -- under black boxes.

But the case isn’t about a secret weapons program -- it’s about baby strollers or kitchen appliances or action figures or some other consumer product. But we don’t actually know because everything, from the name of the company involved to the product it makes, is secret, thanks to a potentially unprecedented court ruling that consumer advocates fear could set a standard of allowing corporations to challenge actions they don’t like without even revealing their names. Welcome to the “Company Doe” case.

In 2008, after a spate of high-profile recalls of lead-tainted toys from China and other products, Congress passed a law to beef up the Consumer Product Safety Commission, an independent federal agency that regulates everything from baby cribs to ATVs to swimming pools -- over 15,000 different products, altogether. The law also created a user-friendly online database aimed at making it easier for consumers to learn about potentially dangerous products by centralizing government reports and allowing any consumer to post his or her own complaints.

The whole point of the database is transparency. It can take months for the agency’s investigations to run their course, and companies have a great deal of control over any eventual recall or public action, so the idea of the database was to close the gap between what the agency knows and what the public knows -- “letting the sun shine in,” as CPSC chairwoman Inez Moore Tenenbaum said in a speech last year.

So it’s ironic that the very first lawsuit challenging the database could become a test case on corporate secrecy.

In October of 2011, a company asked a federal court to stop the agency from including in its database a report filed by a local government agency of alleged harm to a consumer. It was the first such suit, but was generally expected, as manufacturers fought the creation of the database tooth and nail. But what’s unusual is that the plaintiff called itself “Company Doe” and asked the judge to litigate the entire case under seal and under pseudonym so as to protect it from the taint of perceived impropriety.

Balking at this secrecy, a coalition of consumer advocacy groups intervened in the case and filed a motion to unmask the company. They didn’t hear anything for nine months after their first filing. Then, in July of 2012, they were told that not only had the court rejected their effort to unseal the records, but that the case had already been decided in favor of “Company Doe” -- all in total secret. A few months after that came a heavily redacted decision, blacking out the name of the company, the type of product, the local government agency that reported the problem, the potential harm and all other potentially identifying information.

“As far as we can tell, it’s unprecedented,” Scott Michelman, an attorney at Public Citizen who is leading the consumer groups’ litigation, told Salon. “We know of no case anywhere in the country in which companies have been allowed to proceed under a pseudonym, just to protect its reputation.”

This kind of secrecy is common in grand jury proceedings, national security cases and criminal cases to protect the identify of sexual assault victims, legal experts say, but highly unusual beyond that.

“We’re concerned that this decision has the potential to set a very dangerous precedent allowing companies to use the court system to attack government or private action that they don’t like, all under the cloak of secrecy,” Michelman said.

During those nine months, behind closed doors, Company Doe and the government went back and forth through several rounds of litigation. The CPSC revised the report to reflect the company’s concerns, but Company Doe wasn’t satisfied. Both sides conducted scientific analyses, there were more revisions, and eventually the court ruled in favor of the company, granting its requested injunction to stop the publishing of the report in the database and upholding the right of Company Doe to remain anonymous.

Mysteriously, the government decided not to appeal the decision. Scott Wolfson, a spokesman for the agency, told Salon that because all the facts of the case are under seal, he couldn’t explain why the government had decided to forgo an appeal. Still, he said, “We stand by the database.”

“The decision published by the judge concerning one incident reported to the saferproducts.gov consumer database does nothing to change the agency’s statutory mandate and enduring commitment to provide the public with a timely and searchable database containing reports of harm relating to the use of consumer products,” he said.

But Public Citizen, along with the Consumer Federation of America and Consumers Union, the publisher of Consumer Reports, stepped in to appeal, filing their final motion Monday in the 4th Circuit Court of Appeals. Joining their cause are many of the largest media organizations in the country, including the New York Times and the Washington Post, along with the ACLU, all of whom worry about a dangerous precedent of corporate secrecy.

Rick Marcus, a professor at the University of California's Hastings College of the Law who studies complex and unusual litigation, said in an email that it’s hard to think of a similar case to Company Doe, but cautioned that the secrecy may not be as nefarious as consumer advocates fear, pointing to cases that keep sexual assault victims anonymous, for instance. “Sometimes what's good for the goose is not good for the gander. I am doubtful that judges are often granting anonymity or sealing things without good reason,” he said.

Still, everyone agrees that the secrecy is unusual. “The ultimate irony with all of this is that the database is all about transparency,” Rachel Weintraub, a lawyer at the Consumer Federation of America, told Salon. “So much of this seems unprecedented and unfamiliar.”

Leading Company Doe’s legal challenge is well-connected Washington attorney Baruch Fellner of the powerhouse law firm Gibson Dunn. Not surprisingly, he’s staying pretty mum. “We are being very, very circumspect since we represent Company Doe in a sealed matter,” Fellner told Salon, referring us to public court documents. “Beyond that, I’m really not prepared to speak.”

The case comes after manufacturers and their Republican allies in Congress put up an unusually strong fight against the database. Industry groups spent $16 million on lobbying in an effort to kill or weaken the Consumer Product Safety Improvement Act of 2008, but it passed the House 407-0 and the Senate approved the bill 79-13.

That all changed after the Tea Party wave of 2010, however, when newly elected lawmakers saw the database as a classic example of government regulatory overreach into private business. California Republican Rep. Mary Bono Mack called it “puzzling, head-scratching decisions, which create economic hardships for U.S. businesses, without appreciably improving the safety of certain products."

“How quickly they forget” the spate of recalls that led to the creation of the database, the New York Times chided in a 2011 editorial. “The new Republican-led House seems determined to roll back those protections. As part of their slash-and-burn continuing resolution, they cut all the financing -- some $3 million this year -- for a core provision of the safety bill: a database where consumers could report product hazards and the public could check products before buying them.”

Even the infamous Koch brothers got involved. As the Sunlight Foundation reported, the Kochs lobbied against the database and Kansas Republican Rep. Mike Pompeo, whose district includes Koch Industries (which also happens to be his biggest donor), proposed the successful amendment to completely defund the database. Pompeo’s chief of staff, Mark Chenoweth, used to work for Koch Industries. After that, he was the chief legal counsel for Anne Northup, a Republican CPSC commissioner who has vocally opposed the database as a job-killing travesty. Shortly after Chenoweth left Northrup’s office and joined Pompeo’s, the congressman took up the fight against the database, getting the House to pass his amendment and include the defunding measure in the continuing resolution (it was never adopted by the Senate).

Whether Company Doe is connected to that fight or is an isolated case is unclear as we can’t ask them because we don’t know who they are. But the consumer advocates are eager to find out.

But first they’ll have to prove they have a right to intervene in the case, as Company Doe’s legal team is arguing that since the CPSC dropped out, the consumer groups are dead in the water as well. The 4th Circuit is expected to hear arguments this fall, and hand down a decision early next year.

“Where does it end?” Michelman wondered. “You could imagine all kinds of litigants, including corporations, who would rather keep embarrassing facts from becoming public through litigation, but it’s always been part of the bargain that if a litigant wants to use our public court system, then that litigant is exposed to public access of the court system.”